ANALYSIS: Erdogan, champion of Palestine and player to Arab street 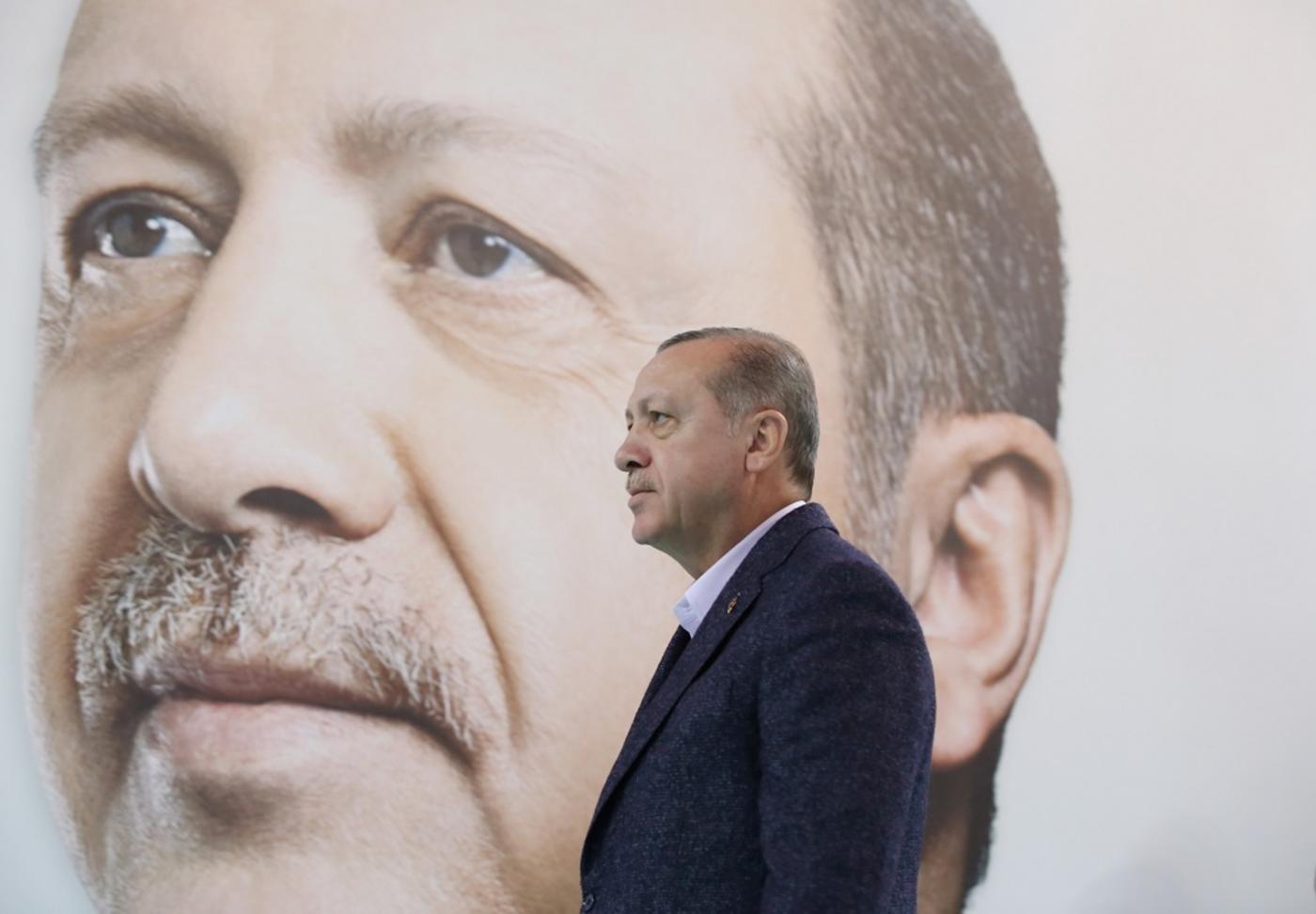 This picture, released by the Turkish presidential office, shows Erdogan, preparing to speak on Palestine (Reuters)
By
Suraj Sharma

ISTANBUL, Turkey - On a cold winter's night in January 2009, in a plush Swiss resort in the Alpine town of Davos, Turkey's Recep Tayyip Erdogan hit upon political gold dust. Overnight he had become the Muslim and Arab world's champion.

With Gaza on fire as Israel fought a bitter and uneven war against Hamas, Erdogan lashed out at fellow panellist Shimon Peres, Israel's then-president, who had spent his allotted time defending Israel's incursion.

You kill people. I remember the children who died on beaches

"Mr Peres, you are older than me," Erdogan said. "Your voice comes out in a very loud tone. And the loudness of your voice has to do with a guilty conscience.

"You kill people. I remember the children who died on beaches. I remember two former prime ministers in your country who said they felt very happy to enter Palestine on tanks."

It marked a turning point for Erdogan, then Turkey's prime minister, and his country. The adulation he received from the Islamic and Arab "street" - Gazans are calling their children Recep - gave him a clear direction: defending the Muslim world and its causes at every opportunity.

Almost eight years on, the now President Erdogan is back on the cause of the Palestinians, trying to take ownership of the Islamic world's response to Donald Trump's decision to recognise Jerusalem as Israel's capital.

His major initiative has been to call an emergency meeting in Istanbul on Wednesday of the 57-member Organisation of Islamic Cooperation (OIC), of which Turkey is the current rotating president.

Erdogan has not stated what his expectations are from the OIC summit but Bekir Bozdag, a Turkish deputy prime minister, over the weekend suggested a mere condemnation would not suffice and more was needed.

But his foreign minister, Mevlut Cavusoglu, on Tuesday said they were against a call for sanctions and that they would call for the recognition of Palestine.

"What kind of sanctions can you impose against the United States? We expect the US to rectify its mistake. We recognise East Jerusalem as the capital of Palestine with 1967 borders. This will be in the text tomorrow," Cauvusoglu told a private Turkish broadcaster.

He also said the attendance of the Saudis and Egyptians remained uncertain while the United Arab Emirates would attend at foreign ministerial level.

The defence of Muslim and Arab causes is in harmony with Erdogan's personal religious beliefs, and also with the desire to see the return of the glory days of the Ottoman empire, and Turkey's position as leader of the Islamic world restored.

The Islamic and Arab world, plagued for decades with rulers who are either secular despots, dictatorial monarchs or theocratic autocrats – all of whom pay no more than lip service to furthering the wellbeing of Muslims, is quick to revere anyone who is willing to publicly speak on their behalf, even if it fails to result in firm action.

Erdogan's government since Davos has been quick to mobilise Turkish resources and dispatch aid to various places where Muslims have become imperilled, whether it be to Somalia or to the Rohingya in Burma.

Critics would say a few planeloads of aid is a minor investment in return for such high political returns.

During its time as a rotating member of the UN Security Council from 1 January 2009 to 31 December 2010, Turkey promoted the view of the Muslim world at various sessions involving the region.

Perhaps even more importantly, championing the cause of the world's Muslims has also helped Erdogan bolster his reputation among his major constituents domestically – the Muslim conservatives.

The latest survey by the US-based Pew Research Centre shows that even with mixed reviews Erdogan fares much better in terms of popularity region-wide than other leaders.

Yet, it also raises the question of whether Erdogan is sincere or just being an astute politician and playing to the "Arab street" for personal adulation and potential domestic political gain.

Levent Gultekin, an author, journalist and former Islamist, told Middle East Eye that judging sincerity was an impossible task but that the entire Islamic world, including Erdogan and Turkey, were engaged in hypocrisy.

"The entire Islamic world – if such a concept even exists – is only engaged in emotional exploitation of its people. And this now includes Turkey as well," said Gultekin.

"Shouting loudly and making threats without any real action doesn't cost anything. The Saudis, Iranians, Turks, all of them have just been shouting and making the same threats for 50-60 years now with no results whatsoever. This is nothing but hypocrisy," he said.

Yildiz Ramazanoglu, a conservative author, believes Erdogan is sincere in his outrage over Palestine and developments in the Muslim world, but that contradictory statements with political and other interests in mind lead to doubts.

"I think the president is sincere. But unfortunate remarks which are contradictory create doubt," Ramazanoglu told Middle East Eye. "The plight of Palestinians since 1917 is as clear as can be. Other interests and considerations need to be put aside. The government needs to take a resolute stand whatever the price."

Conflicting statements have become a common theme in many incidents post-Davos.

Developments following the Mavi Marmara incident of 2010 were a clear indication of such contradictory positions.

The Turkish government minimised relations with Israel after its commandos boarded the Turkish vessel in international waters and killed 10 Turkish citizens.

The Mavi Marmara was the lead vessel in an international six-vessel flotilla looking to breach the Israeli blockade on Gaza and deliver much-needed aid.

The Turkish part of the expedition was organised under the umbrella of the Islamist charity IHH, which is widely believed to operate with the blessing of Erdogan and his government.

The families of the victims and IHH administrators were in for a shock in 2016 after Turkey repaired ties with Israel.

In return for a lump sum compensation of $20m, the Turkish government agreed no charges would be pursued or filed against Israel and its citizens involved in the incident anywhere. Cases in Turkish courts were dismissed.

Erdogan was quick to wash his hands off the entire affair, and in a speech, lashed out at enraged Islamists and asked "if they consulted him before the Mavi Marmara set sail".

"That was yet another unfortunate remark," said Ramazanoglu.

Another condition that Turkey has set for restoring ties with Israel was the lifting of the Gaza blockade – which never happened.

Ankara was only permitted to send controlled aid via the Israeli port of Ashdod, the same situation that existed before the Mavi Marmara attack.

Gultekin sees the inability to be realistic as the reason for these contradictions.

"Turkey and all these other countries have shown that their leaderships are incapable of being realistic. They only play on emotions to maintain popularity," he said.

If he were acting, people both in Turkey and outside would see through him quickly

"You can shout at Israel as loudly as you want but none of them can match it in terms of technology, militarily or any other field. It shows such claims of leadership have no substance."

Yet, said Ramazanoglu, Erdogan's actions have to be seen as well-intentioned and sincere.

"As Muslims it is a matter of principle and a responsibility we have to be the voice of the innocent, not just of Muslims either.

"We might not have the financial and military might but we have to assert moral authority and that is what Erdogan is doing," she said.

"If he were acting, people both in Turkey and outside would see through him quickly." 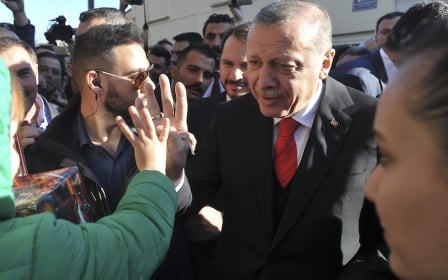 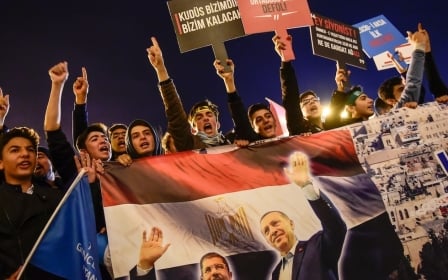 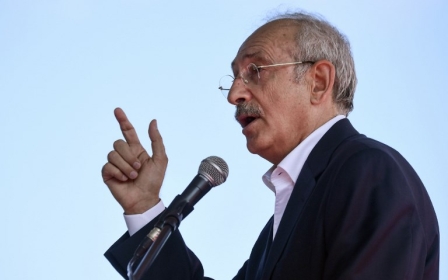