Banner reading “I am a Muslim. I am a Jew. I am a Catholic” held by demonstrators (AFP)
By
Nadia Henni-Moulaï

Attacks in France by the Kouachi brothers and Amedy Coulibaly have sent a shockwave of fear and anger through the country. A total of 20 people, including the three gunmen, were killed over three days.

The attackers claimed to have killed in the name of Islam and, while France has been a country in mourning, there has emerged a backlash of hate against the Muslim community.

Since Thursday a dozen of Islamophobic acts have taken place in France.

In Vendôme, a city south west of Paris, a mosque came under fire on Thursday night. In the northern region of the Pas-de-Calais, two mosques under construction had pigs’ heads thrown on the floors and a swastika sprayed on the wall.

And in the Muslim community fear is on the rise of further attacks.

“What is happening is very hard,” said Nisrine Zaïbi. She is a 27-year old Muslim woman and deputy-president of the Regional council of Bourgogne.

She admitted that the number of racist acts against Muslims in her area has increased since Wednesday’s attack on the Paris offices of satirical magazine Charlie Hebdo.

“The paramedics have just informed me of an Islamophobic attack against a 33-year old man who now suffers from a skull trauma,” she says, adding: “My friend had her hijab removed by force on Thursday evening when she arrived at the maternity ward.”

Zaïbi, who attended a spontaneous rally organized Wednesday in her city of Châlon-sur-Saône, has found reassurance in a growing movement against Islamophobia.

“During the demonstration, non-Muslims expelled far-right protesters who were shouting at them, saying that they were unworthy of the Republic,” she said.

Others have also expressed optimism despite attacks on the Muslim community.

“I received an email of support absolutely wonderful from a former elected representative of the city, a non-Muslim!” said Abderrahmène Azzouzi, a surgeon and municipal counselor in Angers.

Betting on the Republic

Azzouzi, a civil society activist in his 40s and a practicing Muslim, is used to threats from the far-right.

He nevertheless urges Muslims to hold on to the Republic.

“I read an SMS recommending the protection of veiled women in the streets, which I approve of. However, some SMS also mentioned the idea of vigilante groups” to protect Muslims, an idea he described as a “nonsense”.

“I am a Republican and I trust the Republic, it is up to it to protect us. Let’s remember that the risk is shared by everyone, be they Jews or Muslims.”

Azzouzi said he will attend Sunday’s rally in Paris, organized to commemorate those killed in the attacks, but not to apologise on behalf of Muslims.

“I will participate in the Paris demonstration on Sunday because I am a French citizen! Muslims will attend it not out of a feeling of guilty but because they are Republicans,” he added.

The day following the Charlie Hebdo attack, a sharp polemic rose when a Le Figaro newspaper columnist, Ivan Rioufol, “summoned” Muslims “to make clear that they did not agree with [the attack].”

His words had upset another host of the radio show, Rokhaya Diallo, outraged to be the only one, as a Muslim, to have to explicitly voice her opposition to such acts.

For Abderrahmène Azzouzi, his position is clear on the matter: “We are in a country which allows blasphemy. In the Republican framework in which we live, we must accept it.”

“I would have preferred 1,000 caricatures of our Prophet to this bloodbath,” he said.

While Azzouzi will attend Sunday’s Paris rally, other Muslims are more uncertain of their participation.

According to Sihame Assbague, a civil society activist, “participating in this demonstration is very complicated for some of us.”

The reason, he said, is: “We are asked to be visible there as Muslims while, the rest of the time, we are pushed to keep a low profile and make our Islam invisible.”

“Besides, a good number of the organizers of this march have constantly stigmatized Muslims during recent years,” she said.

The issue was debated during an emergency meeting organized on Thursday night in Paris, which gathered around sixty civil society organisations, religious leaders and representatives from the banlieues, the Parisian suburbs.

It was an unprecedented, but necessary, move. The gravity of the events won over frequent divisions within the French Muslim community.

“When 50 to 70 civil society figures, with different ideas and experiences, are gathered together, it is very difficult to get a consensus. But we had to,” said Nassim Lachelache, deputy-mayor of the city of Fontenay-sous-Bois, east of Paris, who attended the meeting.

Muslim community leaders have been gathering since Thursday to define a strategy and attempt to prevent the collapse of coexistence in France.

They have co-authored a column, which will be published in a mainstream media outlet, with the key slogan: “We are together.”

A hashtag with the same slogan will also be launched together with a video featuring messages of support expressed by community leaders and citizens. This collective action is the first of its kind and the potential outcomes remain unknown.

As highlighted by Amadou Ka, president of the NGO Indivisibles, “the fear is that national unity will stop at 8pm on Sunday. Worst, that Muslims will pay a high price.”

All the more that every faux-pas on their behalf will be carefully scrutinized: if their absence is conspicuous on Sunday, some could accuse them of condoning the attacks.

However, for those Muslims who may avoid Sunday’s rally, their absence could be a result of fear among the community.

Amadou Ka, also a member of the “We are together” initiative, reported that several veiled women would like to attend Sunday’s event but fear being attacked. A

According to the Collectif contre l'Islamophobie en France (CCIF) [Group against Islamophobia in France], veiled women represent 78 percent of the victims of Islamophobic attacks.

A new hashtag, #Voyageavecmoi [TravelWithMe] was created on Wednesday night along the lines of a recent Australian initiative, in order to offer support to Muslims frightened of attack while on public transport.

In the aftermath of a hostage crisis carried out by an Iranian man in Sydney, a young Muslim woman on public transport was forced to remove her hijab. Another female traveler had come to her aid, offering to stay by her side so that she could put her veil back on.

The “I’ll Ride With You” hashtag became very popular, illustrating a new wave of solidarity with Muslims but also attesting to the risks now faced by a part of the population.

And if on Friday evening the media talked about a conclusion to events, the term is inappropriate for Kamel Djellal, CCIF president.

“Just as these terrorist attacks do not mark the beginning of a cycle, the death of the three terrorists is only a phase, not an end,” he said.

France has been shocked by the murderous attacks in Paris and it will have to protect all of its citizens. Including the Muslims. 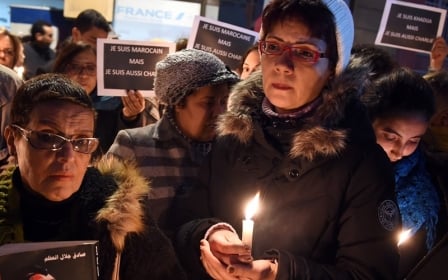