ANALYSIS: Iran heats up in anticipation of crucial elections TEHRAN - Iran is gearing up to elect both its parliament and the Assembly of Experts, with the polls - seen as the most important in the Islamic Republic - being held in February.

The Assembly of Experts is a clerical body charged with choosing the Supreme Leader of Iran and supervising his activities. Members of the assembly are elected from lists of candidates by direct public vote for eight-year terms.

Due to the immense power of this clerical body, the competition is intense as many clerics from different groups and factions - especially conservatives, reformists and moderates - are trying to make their way into the assembly.

The current chairman of the Assembly of Experts is Ayatollah Mohammad Yazdi, a conservative cleric who defeated moderate Ayatollah Akbar Hashemi Rafsanjani in the internal election for chairmanship of the body.

Elections to the assembly were largely uncompetitive before 2007. In fact, for 24 years, everyone in the assembly chose Ayatollah Ali Meshkini to chair the body. Following Meshkini’s death, however, an internal election over the chairmanship was held, and for the first time a number of members nominated themselves.

In 2014, after the death of Ayatollah Mohammad-Reza Mahdavi Kani, a heated internal election for determining his successor was held between Ayatollah Rafsanjani and Ayatollah Yazdi, and against all of the predictions, Rafsanjani lost.

Now, the upcoming elections for the new Assembly of Experts are said to be close, and prominent figures are preparing themselves for a contest that Ayatollah Rafsanjani described as “one of the most important” of the last three decades.

The big race will be between the three moderates and three ultra-conservatives.

Ayatollah Rafsanjani, 80, is the chairman of Expediency Council and two-time president of Iran. Rafsanjani, who was close to the founder of the Islamic Republic, is well known for his pragmatic views on domestic and foreign issues. He announced his decision to run for the election five months ago, resulting in a harsh war of words from hardline opponents.

Hardliners accuse him of turning his back on revolutionary principles, and consider his presence in the assembly dangerous. Moderates and reformists however believe Rafsanjani’s attitude and policies are completely in line with the goals of the Islamic Revolution, and helpful for Iran.

Ayatollah Seyyed Hassan Khomeini, 43 - the grandson of Ayatollah Rouhollah Khomeini, who toppled the Shah in 1979 - is another runner. This is the first time since the death of Khomeini that a senior member of his family has stepped into the field of politics. Hassan Khomeini is well-respected among various factions, and is a popular figure among people - especially youth - for his progressive ideas.

The young ayatollah faced serious attacks by hardliners for his speeches against mismanagement during the presidency of Ahmadinejad. In an address in 2011, he described “extremism” as “usually the greatest danger to a movement”.

In 2013, he called the barring of Rafsanjani from the presidential election “unbelievable”, and then supported Rouhani.

Now, following the announcement of his nomination, hardliners have started their negative campaign against Khomeini. Hardline newspaper Kayhan accused Khomeini of being deceived by Rafsanjani. However, moderate conservatives and reformists have welcomed Khomeini’s decision to put his name forward.

Seyyed Mehdi Tabatabai, a well-known moderate conservative cleric, told Tolou Sobh weekly: “If Imam Khomeini was alive, he would have asked Seyyed Hassan Khomeini to run for the election.” In fact, Khomeini is considered as the trump card of moderates in the election.

Hassan Rouhani, 63, the president of Iran, is also expected to be a candidate of the Assembly of Experts. He previously served in this body for two terms, and is close to Rafsanjani. He is currently under fire by hardliners for his policies, and is expected to face more attacks should he be nominated.

Ayatollah Mohammad Yazdi, 83, the chairman of the Assembly of Experts, is the head of the Society of Seminary Teachers of Qom, an important group inside the conservative camp. He also served as the head of the judiciary of Iran between 1989 and 1999. He is a staunch critic of Rouhani’s policies and has slammed him repeatedly. Moreover, Yazdi has sour relations with Ayatollah Rafsanjani.

Following Iran's 2009 presidential election, resulting in unrest, Yazdi (a supporter of Ahmadinejad) criticised Rafsanjani harshly for his positions. Yazdi's criticism led to a response by Rafsanjani, who said: “For years I have told Mr Yazdi that I will pray for his healing and will always kindly greet him. Unfortunately he gets angry due to his physical problems and then expresses his opinion with haste.”

Ayatollah Mohammad Taghi Mesbah Yazdi, 80, is one of the most controversial clerics in Iran as he is considered the leader of hardliners. Rafsanjani is a critic of Mesbah Yazdi and believes he hadn’t helped Ayatollah Khomeini before the revolution.

Mesbah Yazdi, who even has serious conservative critics, was the main supporter of Ahmadinejad before and after he took office, and has traded barbs with Rafsanjani and Rouhani. A year ago, he attacked Rouhani, saying: “Some individuals with official positions who wear a turban, in response to ... the concern of the clergy with religion and culture, introduce [those concerned] as people who do not know Islam, and accuse them of being delusional.” Mesbah Yazdi asked: “Where did you learn religion? From the Qom seminary, or Britain?

Ayatollah Ahmad Jannati, 87, heads the powerful Guardian Council (which is tasked with approving the candidates of elections) and also the Tehran Friday prayer leader, has strained relations with moderate figures such as Rouhani.

He also strongly backed Ahmadinejad during his presidency, and has repeatedly criticised Rouhani for his cultural and foreign policies. On 14 August, Ayatollah Jannati alluded to Rafsanjani, saying: “The Assembly of Experts elections are more important than the parliamentary ones. There is this concern that some want to politicise the Assembly of Experts elections and do whatever they want to do when they get in there [in the Assembly]. If they succeed, they will cause problems for the Establishment and the Revolution.”

Currently, the moderates have a fragile coalition inside the Assembly of Experts which led to them losing the chairmanship to the ultra-conservatives.

It seems that the nomination of Hassan Rouhani and Hassan Khomeini will help the moderates to have the upper hand, both before and after the election. In fact, Rouhani is popular among people because of the nuclear deal, which will end sanctions against Iran, and young Khomeini is admired by the youth for his frank and courageous positions regarding national and international issues in Iran.

Sadegh Zibakalam, a political activist, told MEE: "The trio of Rafsanjani, Khomeini and Rouhani will probably win the election due their high popularity. Inside the Assembly of Experts, the moderates will have the chance to chair this clerical body again.”

Hossein Kanani Moghaddam, a political analyst, told MEE: “The only difference between this assembly election and previous ones is that we are facing the nomination of young clerics, who will make this body more effective.”

Moreover, many believe the ultra-conservatives’ chance for gaining many seats is low.

Darush Qanbari, a former politician, told MEE: “In the 2013 presidential election, people showed that they don’t want hardliners to rule them. The favourite candidate of hardliners (Saeed Jalili) in the presidential election only managed to obtain four million votes, so I believe the same will happen in the Assembly of Experts election, and moderates will be successful.” 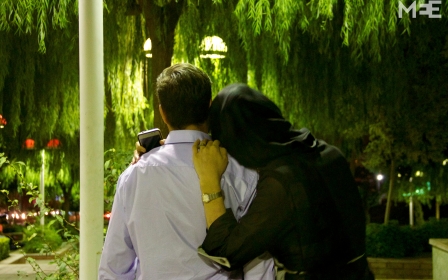