ANALYSIS: Turkey, an occupying power or Iraq's saviour from IS?

Baghdad has told Turkey to pull its 'occupying' forces from the north of Iraq. Ankara says they are fighting terrorism when others can't ISTANBUL, Turkey - Turkey has hundreds of troops and dozens of tanks on Iraqi soil. Its military has a reported battle plan to help "liberate" Iraq's second city Mosul. Its parliament has extended a constitutional mandate harking back to the Saddam era to allow Turkish forces to remain in the country.

Yet Iraq's parliament wants nothing of this. The Turkish forces stationed at Bashiqa in Iraq's Kurdish region are a "foreign occupying power", according to MPs, and their prime minister Haider al-Abadi has warned the Turkish presence risks conflagration and "regional war".

How then, can Turkey justify its presence in northern Iraq? The answer, according to Turkish officials and analysts, is terrorism: Turkey has a legitimate right to prevent terrorist attacks originating from neighbouring countries, particularly if those states are incapable of eradicating such threats on their own.

That is why the 250 of its troops, artillery and 25 tanks will remain at Bashiqa, training Iraqi forces and defending against the threats of Islamic State.

Turkey's Deputy Prime Minister Numan Kurtulmus said on Wednesday that Turkey was willing to co-operate with Baghdad, but noted that Mosul fell in one day to IS.

Ankara’s primary concern is to clear both Iraq and Syria of IS and other militant elements and thereby reduce the threat to Turkey, a Turkish official involved in foreign policy planning told Middle East Eye.

“Thus far Turkish artillery and troops in Bashiqa have eliminated 650 Daesh [the alternative term for IS] members,” he said.

The official also pointed to Iraq’s Sinjar region, which he said was being used by Turkey's enemy, the Kurdish PKK, to transfer arms and personnel to its alleged affiliate the Democratic Union Party (PYD) in neighbouring Syria and creating a double threat to Turkey.

He said the failure of the Iraqi government to deal with these threats meant Turkey had to take action to ensure its own safety.

“Officials from the Iraqi central government have visited the Bashiqa camp on numerous occasions as well and know what the Turkish presence there is for,” he said.

The official said Turkey fully respected Iraq’s territorial integrity and was not there to occupy or create a permanent presence in Iraq.

The Iraqi demand to withdraw, according to the official, was nothing more than domestic political posturing.

“There is no other reason for it. It has happened in the recent past as well and nothing has come out of it,” the official said. “There has been a Turkish troop presence in northern Iraq since the 1990s based on agreements from that period and it has never been an issue.”

The Iraqi decision is believed to have come after the Turkish parliament on 2 October extended the mandate for its troops to carry out military operations in Iraq and Syria for another year. The mandate in its current form has been in force since 2014.

Saddam-era deals in a post-Saddam age

The Turkish mandate, based on Article 92 of the constitution, allows Turkish troops to operate in Iraq and Syria in cross-border operations while also allowing foreign forces to be deployed in Turkish military bases and to transit through Turkish territory in operations against IS.

Oytun Orhan, a Middle East expert at the Ankara-based Centre for Middle Eastern Strategic Studies, told MEE that the Turkish military presence in northern Iraq was legitimate from both a legal and political perspective.

The agreement with Iraq stems from after the first Gulf war in 1990. With a no-fly zone imposed over northern Iraq and the two main Iraqi Kurdish factions engaged in a bitter civil war, the PKK was free to operate from there and launch attacks on Turkey.

The Turkish government reached an agreement with the Saddam regime to deploy small numbers of troops to confront the PKK.

According to Orhan, the central Iraqi government is only trying to create an obstacle now due to Iranian pressure.

“The Iranians don’t want to see Turkey regain any of its former influence in Mosul after IS is driven out. I believe this move at this time by the Baghdad government is due to Iranian pressure,” he said.

Orhan also said the Turkish presence in Bashiqa should be viewed as being part of the action taken by the international coalition against IS.

“Turkey is part of that coalition. It takes part in air strikes against Daesh, in other operations as well. The camp in Bashiqa is also geared toward the fight against Daesh. So there is no question about the legitimacy of the Turkish military presence in Bashiqa.”

The timing of the Iraqi parliament’s call for a withdrawal could potentially affect a major operation being planned to liberate Mosul from IS control.

The Turkish official told MEE that although he was not privy to operational plans he could confirm that talks were under way between the Turks, Americans, Iraqis and Barzani’s government over a major Mosul offensive.

“Talks have been taking place. Mosul is crucial to Iraq’s future in many aspects, including the sectarian one. The central Iraqi government needs to be careful not to repeat the same sectarian mistakes that led to the current situation in Mosul anyway,” he said.

Ankara had earlier expressed willingness to jointly participate in any US military operation on the IS strongholds of Raqqa and Mosul.

However, its offer was not unconditional. It demanded that the US not use any People’s Protection Units (YPG) fighters in these operations.

That claim is however disputed by the US-led coalition against IS.

John Dorrian, a coalition spokesman, said Turkish troops based in Iraq were not part of the international coalition task force.

“The Turkish military presence on Iraqi territory isn’t there with official Iraqi permission and is illegal,” Turkish media quoted him as saying.

Just what influence the US has over Turkish manoeuvres remains to be seen. Turkey At War
Turkey extends mandate to use troops in Iraq, Syria by one year 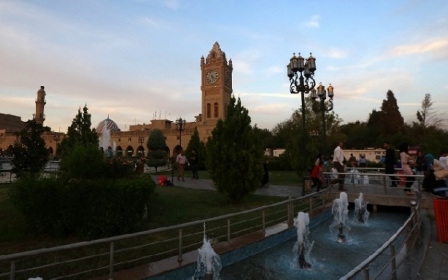 Iraq at War
ANALYSIS: A battle for power in Kurdish Iraq