Kemal Kilicdaroglu says his fight for democracy is just beginning. Will he have any effect on the next presidential election? They came in large numbers to chant "rights, law, justice".

And they came with a message: the opposition in Turkey has not been fully silenced.

The march from Ankara to Istanbul began on 15 June and climaxed with a massive rally on Sunday.

Both events were primarily a reaction to the perceived spread of injustice and abuse of the judicial system by the ruling Justice and Development Party (AKP), especially after a state of emergency was introduced following the coup last year.

But the march and rally were also a marker laid down in the race for the 2019 presidential elections.

The vote is crucial: whoever wins will take office with vastly expanded powers as the executive presidency system takes full effect. The system was endorsed by the narrowest of margins in an April referendum.

Marchers said no to hate

The justice march and rally also offered another way of engaging in politics: one which is not filled with divisive and hate-filled rhetoric, which has become the default mode of the ruling AKP.

Not once did Kemal Kilicdaroglu, 69, and those marching with him respond negatively to pro-government supporters targeting them along certain stretches of the 450km journey. Instead they responded with applause.

Kilicdaroglu is leader of the Republican People's Party (CHP), but has always insisted that he was not marching in that capacity.

During Sunday's rally he silenced any heckling from the crowd after remarks that targeted Erdogan and his government.

The same Erdogan who had stated that he saw no difference between the justice marchers and the putschists who gunned down civilians during last July's coup attempt.

It resonated strongly with the crowd when Kilicdaroglu said they were all gathered to break down the "walls of fear" erected by the ruling party and its leaders.

The justice march was a spontaneous decision taken on 14 March after the arrest of Enis Berberoglu, a Republican People's Party (CHP) politician, for "espionage".

Berberoglu was arrested on 14 March for his alleged role in distributing a video to the Cumhuriyet newspaper that showed prosecutors seizing lorries, allegedly belonging to Turkish intelligence, carrying weapons to Syria. He has denied any involvement.

The video was filmed and published in Cumhuriyet in 2015. It had also appeared in other media outlets.

At the time Erdogan vowed to personally ensure that Can Dundar, the then-editor of Cumhuriyet, would pay for his "treason".

Dundar said he received the video in question from a leftist MP. The journalist fled Turkey when released on bail and currently lives in exile in Germany.

Kilicdaroglu's decision to not march under his title of CHP chairman and also prohibit the display of any party symbols proved wise.

He chose to protest under a simple sign which read "justice". Demanding justice on behalf of everyone – and not just for his political allies - meant that support for the march and rally grew rapidly and came from beyond CHP supporters.

As the march gathered momentum and grew in numbers, so the verbal attacks from the AKP camp grew stronger. The entire array of the pro-government media was mobilised to ridicule and attack the march and Kilicdaroglu.

But the manner in which he handled the justice march drew praise.

Murat Yetkin, the editor-in-chief of Hurriyet's English-language newspaper, wrote on 8 July: "The march also seems to have promoted Kilicdaroglu from being the chairman of the CHP to its leader in the true sense of the word," Yetkin wrote on 8 July.

Even more significant perhaps were the voices from conservatives. Elif Cakir, a conservative writer for Karar, said the CHP's shift of emphasis from secularism to justice needed to be recognised.

"It is precious when a CHP which, for 80 years could only swirl the word secularism around its mouth, today speaks of justice and even more speaks of justice for everyone," she wrote on 23 June as the march was well under way.

And conservative writer Ahmet Tasgetiren from the Turkish Star newspaper, incurred the wrath of colleagues at his own paper, when he said that instead of trying to belittle the march, the ruling party and its media would do well to listen to its pleas for justice.

'This march does not end here. This is just the beginning'

The latest move by the government has been to downplay the numbers who attended the rally.

Figures within the CHP put the number of attendees at around 1.6 million. The Istanbul governor's office early on Monday claimed attendance was a mere 175,000.

But experienced observers say at least a million people had gathered.

Energised by the large crowd, Kilicdaroglu spoke for an hour, touched on issues both pressing and for the future.

He said their quest for justice for every single person in the country would continue.

He said that unlike the presidential palace and the AKP, he was determined to fight both the coup plotters and to ensure that no one's rights were violated.

And he promised the people that one day they would experience first-class democracy, where everybody would be allowed to voice their thoughts.

"This march does not end here. This is just the beginning. We will definitely bring first-class democracy to this country. Everyone will be able to express themselves.

"Everyone should know very well that July 9 is a new step, a new history... a new birth."

Sunday's rally also showed that the diverse groups that comprised the No campaign during the referendum remain united. And that Kilicdaroglu has a major role to play in keeping it together.

Meral Aksener, a centre-right politician who played a big role in mobilising the nationalists to vote against the presidential system change, sent a note of congratulations to Kilicdaroglu on Sunday.

Translation: "I congratulate Mr Kilicdaroglu on the ‘JUSTICE' march he will complete today," it read. "Through Gandhi's march the Indians broke the Salt ban and attained their goals. That day was the start of that led to Indian independence. In the coming days we will see what result the justice march will have. If the Turkish Nation does not attain justice despite this march, it is not an indication that the march was misdirected or unsuccessful, but instead an indication of the dark and desperate situation we find ourselves in."

A poll carried out as the justice march was underway also shows that the MHP nationalists were split when it came to support.

(The light blue indicates the level of support each party with representation in parliament has for the justice march.)

It was perhaps with this in mind, and an attempt to increase support from the nationalist camp, that Kilicdaroglu in his speech on Sunday made no mention of the imprisoned MPs from the pro-Kurdish Democratic People's Party (HDP).

In an interview with the German publication Spiegel on Sunday, he cautiously hinted that this was the first move in the campaign for the 2019 election.

"It is too early [to mention next steps]," he said. "Politics in Turkey changes on a daily basis. But I promise you our fight for democracy and justice does not end with the speech on Sunday. This is just the beginning.

"We will carry out a campaign [for 2019] based on democracy and justice. And I tell you: We will win."

It's a bold move. When Kilicdaroglu took over as chairman of the CHP in 2010, he was expected to bring change, if not reform. He was the fresh blood who would bring the party into line with Turkey's modern realities.

The CHP is a behemoth of a party that houses a competing range of ideologies. It includes hardcore secularist Kemalists, militant nationalists, leftist social democrats and every combination in between.

The party also carries a lot of baggage from its past where it was the elitist and statist party.

Kilicdaroglu's progress has been slow, but he has started to make his mark.

His party's No campaign during the referendum was lauded for doing very well despite all the odds stacked against it. The CHP had opted for a campaign in which it would point out the pitfalls of a presidential system without launching personal character attacks on Erdogan.

The AKP for years bemoaned the lack of an effective opposition. Now Kilicdaroglu appears to be ready to provide it.

One rally participant, who said she was attending a demonstration for the first time since the 1970s because the situation was now so dire, told MEE: "Kilicdaroglu has finally started taking a position to the left of the centre. He is now behaving like a social democrat.

"This will bring him a lot of support both in the CHP and from outside. Someone has to stop our country's fall into dictatorship."

But AKP supporters, much like their leaders, see a dark foreign plot behind everything these days.

One told MEE that Europeans were behind the huge turnout at the rally. "This is also the work of foreigners. Europe does not want to see Erdogan become president in 2019 and will do everything in its power to prevent it." 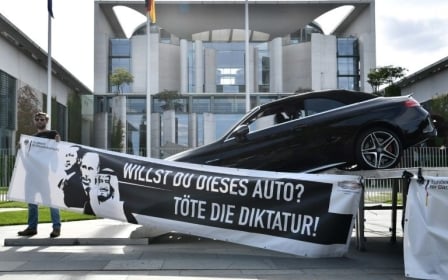