Israeli police enter hospital, witnesses believed they were looking for those wounded in protests 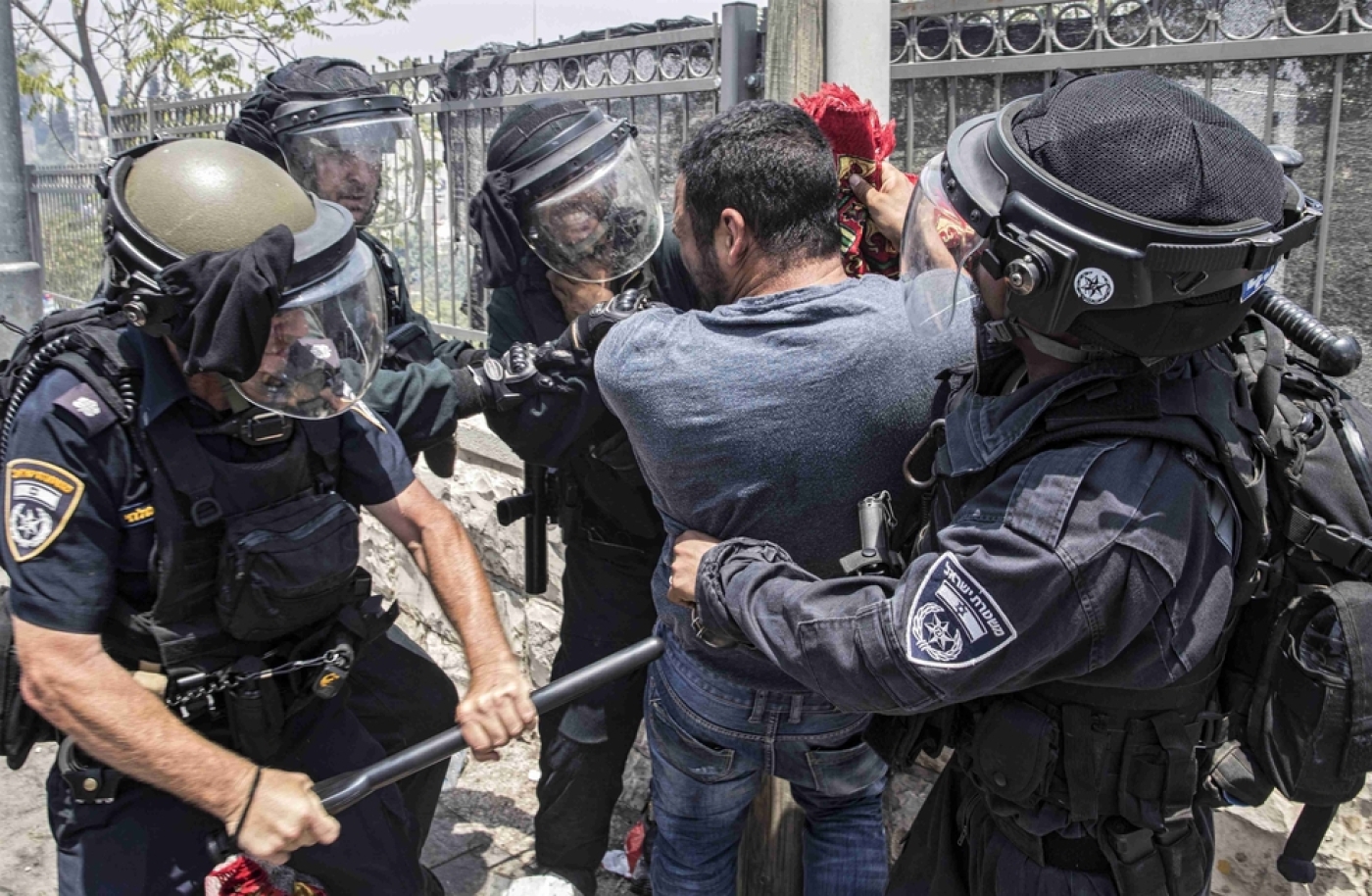 JERUSALEM - Three Palestinians were shot dead and four others wounded as thousands of Palestinian worshippers clashed with security forces on a "day of rage" over Israeli control of Islam's third-holiest site. Israel's army said a family of three Israeli settlers were stabbed to death and a fourth was wounded in the Israeli West Bank settlement of Neve Tsuf on Friday.

Mohammad Sharaf, 17, was reportedly shot by an Israeli settler in the Ras Alamood area in East Jerusalem. Mohammed Hassan Abu Ghannam, 19, died of wounds in al-Makassed hospital after he was shot by an Israeli settler in East Jerusalem. Footage on social media shows Ghannam's body being carried over the hospital gate by Palestinian paramedics and protesters.

The Israeli family that was stabbed were reportedly having Shabbat dinner. A 20-year-old Palestinian from Khobar barged into the house, killed three family members and severely wounded a fourth. The three slain were the father, who was in his 60s, his son and daughter who were both in their 40s, according to a Haaretz report. The mother is being treated at Shaare Zedek hosptial in Jerusalem.

The reported assailant was identified in news reports as Omar el-Abed from the West Bank village of Khobar near Ramallah.

Abed sustained some injuries and was sent to Rabin Medical Center in Petah Tikva for treatment, according to a Haaretz report.

The army said in a statement that the four victims were Israeli civilians and that the assailant was also shot. It was not known whether he was alive.

The deaths came as thousands of Palestinians clashed with police after peaceful prayers around the Old City. Many had refused to enter the Noble Sanctuary and the al-Aqsa mosque in protest of new Israeli security checkpoints at two key entrances.

The sanctuary has for a week been subjected to increased security measures, including metal detectors, that many in Palestine see as an attempt to gain control of the site.

Worshippers outside the Old City were scattered soon after Friday prayers as Israeli police fired tear gas and rubber bullets into the crowds in Salah al-Din Street. Four Palestinians were reported injured.

Israel arrested 29 Palestinians in the West Bank and East Jerusalem and more than 390 people were injured on Friday, according to a Haaretz report. The Red Crescent said most of the injured Palestinians inhaled tear gas while 38 were hit with live and rubber bullets.

Israeli police also entered al-Makassed hospital in Jerusalem and asked employees to leave. Witnesses said they believed Israeli officers were looking for those wounded in the clashes.

Earlier, the hospital released a statement asking for blood donations because of the number of injured.

The Israeli action after prayers came on a day Palestinian leaders had promised a "day of rage" over Israel's moves to control access to the sanctuary, following an attack by gunmen last week that killed two Israeli police.

Israel poured thousands of extra police into the city in response. Police were seen taking up positions above crowds of worshippers, armed with baton rounds and assault rifles.

Officials including the Palestinian Authority's chief negotiator, Hatem Abdel-Kader, were arrested shortly after the talks failed.

Speaking to MEE before his arrest, Abdel-Kader, said: "The Israeli offer to keep the metal detectors in place, but only require suspicious individuals to pass through them, was unreservedly rejected by the Palestinians.

"There will be an escalation tomorrow. Clashes will inevitably continue until freedom of religion is restored."

Clashes between Palestinians hurling stones and Israeli police using stun grenades have been a daily occurrence in East Jerusalem since the metal detectors were installed on Saturday at entrances to the Noble Sanctuary, which includes the al-Aqsa mosque.

Abdala Athem Salhab, the head of the Waqf counsel that administers the Noble Sanctury site, said: "We are all united and it's our responsibility to protect the Aqsa mosque - we won't step back. We are asking Jordan to intervene to remove the doors, otherwise Israel is leading the area to religious war."

Ahmed Tibi, a member of the Israeli parliament for the Arab List coalition, said it was the duty of Palestinians in Israel and Jerusalem and the West Bank "to act now in order to protect the Aqsa from the Israeli forces. The Aqsa is not only a religion issue but also a political one.

"Our response to Netanyahu is that we say no to the detectors and we will continue the protest. We hope the Islamic world and the international community take action to stop the violations."

Palestinian president Mahmud Abbas spoke with the US president's son-in-law Jared Kushner, a senior adviser who has been tasked with resolving the Middle East peace impasse, reported Wafa, the official Palestinian news agency.

Abbas called on Washington to immediately intervene, saying that the situation was "extremely dangerous and might spiral out of control," the agency said.

Muslim religious authorities claim the metal detectors violate a delicate agreement on worship and security arrangements at the Jerusalem site and have urged Palestinians not to pass through. Prayers have been held near an entrance to the complex.

On Thursday night, Israeli forces wounded 22 Palestinians at Lion's Gate, near Haram al-Sharif, in Jerusalem. According to the Red Crescent, two of those hurt are in serious condition after they were hit by a stun grenade.

Israel's prime minister, Benjamin Netanyahu, has considered removing the devices at the site but so far the detectors remain in place.

Abdel-Kader told Middle East Eye: "The metal detectors serve no security purpose whatsoever. Rather, their erection is a political play to pressure Palestinians into relinquishing control of al-Aqsa."

"With the religious and political sensitivities surrounding al-Aqsa - as a universal sanctuary for Palestinians, Arabs and Muslims - Israel is taking a massive gamble and ultimately, crossing a red line. Undoubtedly, this may have dangerous consequences," Abdel-Kader said.

Far-right members of Netanyahu's government have publicly urged him to keep the devices in place at the flashpoint.

Still, Israeli media reports said security chiefs were divided over the issue amid concerns about wider Palestinian unrest in East Jerusalem and the West Bank.

"Israel is committed to maintaining the status quo at the Temple Mount and the freedom of access to the holy places," the security cabinet said in a statement.

"The cabinet has authorised the police to take any decision in order to ensure free access to the holy places while maintaining security and public order."