Currently the third-largest party in the Knesset after winning 13 seats in the last election, the Joint List now finds itself torn over how to proceed With Israeli President Reuven Rivlin expected to announce who will form a coalition government on Wednesday, the country's Palestinian minority has been torn over whether to jump in the fray.

The Arab Joint List is the third-largest political group in Israel's parliament, the Knesset, after winning 13 seats in legislative elections earlier this month. The coalition of political parties represents the Palestinian community inside Israel, which makes up 20 percent of the country’s population.

The Joint List's move marked the first since 1992 that Palestinian parties inside Israel backed a figure vying for premiership. At the time, they had come out in support of Labor's Yitzhak Rabin amid Oslo Accords negotiations between Israel and the Palestine Liberation Organisation (PLO).

'We want to get rid of Netanyahu as he is a racist leader, but the majority of Israeli society voted for right-wing parties'

The Joint List fears that a national unity government between Likud, Blue and White and Yisrael Beiteinu would be the worst nightmare for Palestinian citizens of Israel, as well as others in the occupied Palestinian territories.

But the decision to back Gantz did not go down without a debate inside the Joint List, which is made up of four parties - Balad, Hadash, Taal and the United Arab List.

Balad, a party that champions the idea of "a state for all its citizens" and Palestinian Arab identity, objected to the move and its three MPs subsequently withdrew their names from the recommendation.

Hadash MP Yousef Jabareen, whose party calls for equal rights for all citizens inside Israel, told Middle East Eye that the move to back Gantz was “neither right nor wrong”, as Palestinian parties in the Knesset find their margin of manoeuvre shrinking.

“The main goal was to express the wish of the people who voted for us to oust Netanyahu and the extreme right, though they are no guarantee that a genuine change would happen in the Israeli policies even if Netanyahu is gone,” Jabareen said.

“After years of experiencing incitement from Netanyahu and his government's racist laws, such as the nation-state law, and the increase of occupation and settlements, getting rid of Netanyahu has become an urgent demand,” he added

After the Joint List endorsed Gantz, Yisrael Beiteinu leader Avigdor Lieberman lambasted the move, describing the coalition as "a fifth column" and saying that its MPs should go and "serve in the parliament in Ramallah".

Jabareen said that Lieberman's statement was no surprise

"Lieberman has built his political life on incitement," he said.

Meanwhile, Gantz and Lieberman met on Monday to talk about the possibility of forming a national unity government.

The Balad party's split from the rest of the Joint List has laid bare the disagreements within the coalition regarding how to proceed.

In a statement, Balad slammed Gantz's "Zionist ideology and his right-wing positions, which do not differ much from the positions of Likud".

Listing Gantz's history as Israeli army chief of staff who oversaw two deadly conflicts in Gaza in 2012 and 2014, his recent meetings with both Netanyahu and Lieberman in an attempt to form a unity government, and his party's "refusal to commit publicly to implement the demands made by the Joint List", the Balad statement concluded: "Any one of these reasons is sufficient not to recommend to Gantz, and all of them together certainly lead to this [decision]."

With Netanyahu currently fighting tooth and nail to stay in power with several corruption cases hanging over his head, the Balad MPs' decision to abstain from backing Gantz has meant that the Blue and White candidate has fewer backers than Netanyahu in the Knesset, giving the current prime minister a slight edge in forming a ruling coalition.

Sami Abu Shehada, a Knesset member from Balad, told MEE that his party's refusal to back Gantz was based on a realistic reading of the Israeli election.

“We want to get rid of Netanyahu as he is a racist leader, but the majority of Israeli society voted for right-wing parties," he said. "We do not want to wish things, because the election results show that we only have 13 seats out of the 120 in the Knesset.”

He added that the only choice for the Joint List was to recommend one of its members to be a prime minister.

On paper, Netanyahu has a slim lead over Gantz in building a parliamentary bloc, with pledges of support from 55 members of a right-wing grouping to 54 for Gantz.

Both are short of a 61-seat majority.

A nominee gets 28 days to do so, with a possible 14-day extension, before Rivlin can turn to someone else. 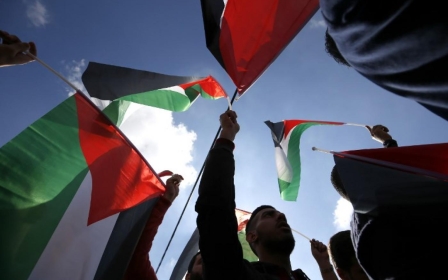