Caught between Russia and Turkey, Armenians say West has abandoned them 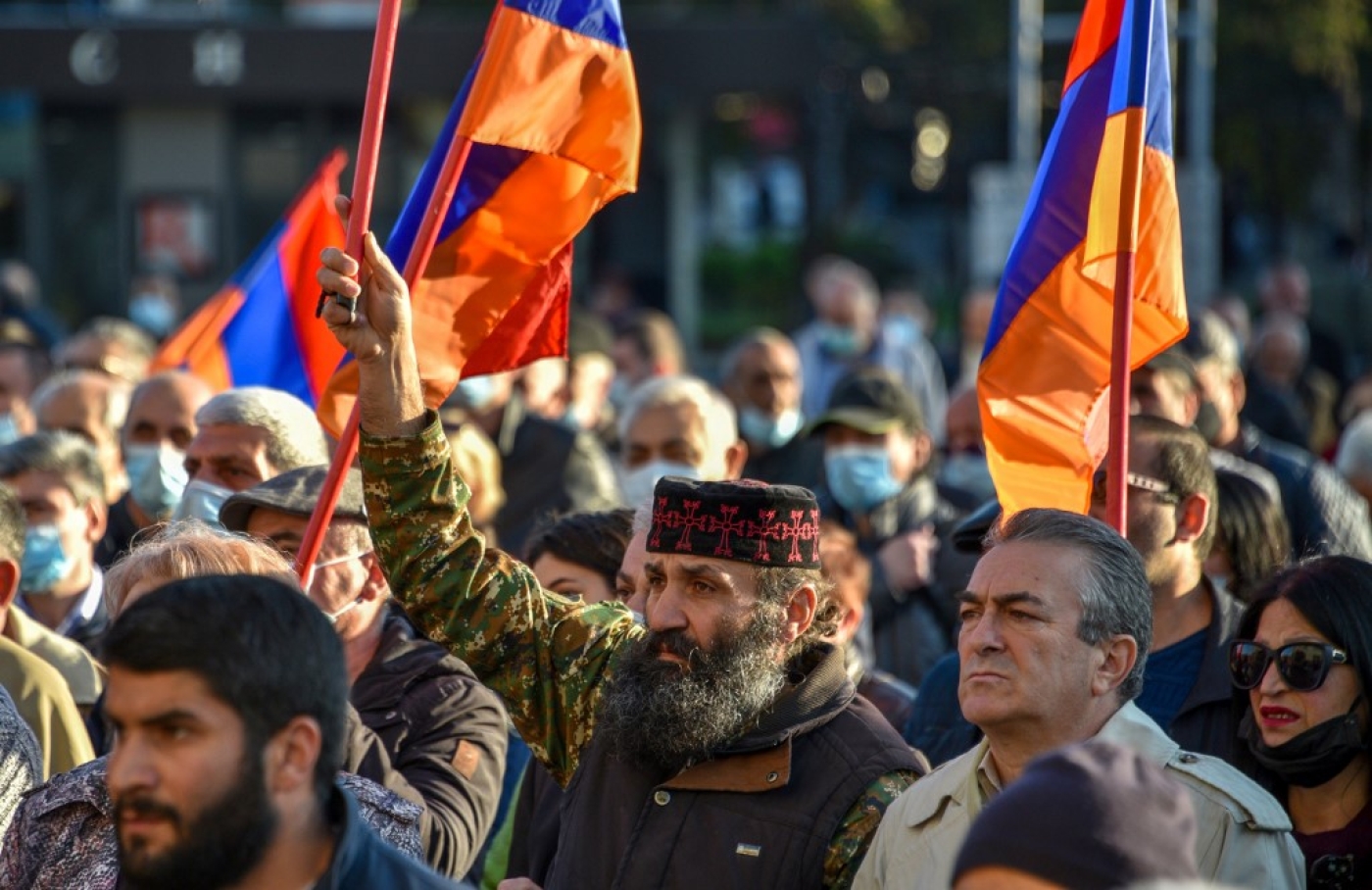 People protest in Yerevan against Armenia's ceasefire agreement with Azerbaijan over Nagorno-Karabakh on 12 November 2020 (AFP)
By
Peter Oborne
, Jan-Peter Westad
in
Yerevan

It's been two-and-a-half years since Armenia became the latest former Soviet state to throw off a pro-Moscow government.

In April 2018, Nikol Pashinyan, a former journalist and political prisoner, led a series of daily protests that saw him peacefully take power from the Russian-backed government of Serzh Sargsyan, in what Pashinyan and his supporters styled as Armenia's "Velvet Revolution".

At the time this was widely seen as a glorious moment in Armenia's history, which would usher in a new democratic politics and strike a decisive blow against the corruption that flourished under the previous Republican Party. Pashinyan's position as prime minister was consolidated by elections in December 2018 in which his parliamentary bloc secured more than 70 percent of the vote.

Two years later and the handover of power looks very different to many Armenians.

They are wondering whether they have paid a heavy price in the shape of the loss of Russian President Vladimir Putin's support in the disputed region of Nagorno-Karabakh. When the latest fighting broke out on 27 September, Turkey threw its weight behind Azerbaijan, providing weapons, strategic advice and fighters on the ground, including hundreds of Syrian rebels.

In sharp contrast, Russia remained conspicuously even-handed, with Putin telling reporters he was in constant communication with both Pashinyan and Azerbaijani President Ilham Aliyev, and that he would not take sides.

When MEE spoke to MPs in the Armenian parliament in the capital Yerevan, Arman Abovya, the secretary of the opposition Prosperous Party, said: "The main actors in the region have to be Turkey or Russia. Global powers have to reckon with these actors."

The strong implication for Armenia is that it has no choice but to do the same.

Since Pashinyan took office, however, relations between Armenia and Russia have become strained.

In his bid to tackle corruption, Pashinyan has taken former strongmen to court, including Yuri Khachaturov, the current general secretary of the Collective Security Treaty Organisation, a Russia-led military bloc.

The Russian media has criticised Pashinyan for his repeated visits to the West and highlighted some senior government officials' links to the US.

This may help to explain why Russia, which has traditionally been Armenia's closest regional ally and main rival to Turkey, emerged late on in the conflict.

The first major intervention came when Putin joined Azerbaijan's Aliyev to announce a ceasefire deal, one which Armenians see as deeply humiliating due to the loss of swathes of previously Armenian-held territory in Nagorno-Karabakh.

While Nagorno-Karabakh is internationally recognised as part of Azerbaijan, its population is mostly Armenian, and the region had been under the control of Yerevan-backed separatists since a war in the early 1990s. Much of that territory had already fallen to Azerbaijani forces prior to the ceasefire agreement.

Aside from the violent opposition of Turkey-backed Azerbaijan and the passivity of Russia, observers have pointed to the fact that Israel has supplied drones to Azerbaijan. However, senior Armenian figures told MEE they could not criticise Israel, as Armenia had been offered the chance to buy the same military technology.

One Armenian source, however, was sceptical of what he described as Israel's claims that Azerbaijan was an ally against Iran.

Meanwhile, Armenia's lurch towards democracy and economic liberalism has done it few favours in the West.

Europe and the US took no substantive measures to help embattled Armenia as it fought a war against a much more powerful enemy.

This explains the mounting anger against the West we witnessed here in Yerevan.

As two British reporters, we were not welcome among sections of the anti-government protest which gathered outside the national opera house in Yerevan on Wednesday morning.

The main target of the demonstration was Pashinyan and the ceasefire agreement. There were loud repeated chants of "Traitor Nikol".

But he was not the only target. One protester shouted "Fuck Britain!" at us as we interviewed local people. Another repeatedly found us in the crowd to explain in no uncertain terms that "Britain has let Armenia down". Our guide felt the need to tell numerous protesters that we were journalists reporting on events and not representatives of the British state.

One teacher who approached us told us of her despair at the failure of the West to show support for Armenia. Wearing a Covid-19 mask in the crowded demonstration, she said she had attended many international conferences and seminars celebrating freedom and democracy.

"We asked for help. We cried, but nobody answered. How can we now teach our children about tolerance and human rights? I taught these values for 25 years. These values are in our blood, but we are the ones punished," she told MEE.

"Those who failed to help us should be ashamed," she added.

'The world punishes us'

Anush Vasillii Atajanyan, a lawyer in Yerevan who is originally from Nagorno-Karabakh, summed up the dilemma faced by Armenia.

She told us her cousin was killed by a drone attack in the recent conflict. She said he had died assisting wounded soldiers.

"We are so disappointed. We didn't start this war and now we face this tragedy."

Many Armenians feel globally friendless. This emotion was expressed forcefully by Armine Aleksanyan, a spokesperson for the Republic of Artsakh, the separatist government in Nagorno-Karabkh recognised by Armenia.

When we visited her in her Yerevan office, we asked for her message to the world. She replied: "Shame on everyone. Every country separately and the world as a whole. It sat in the front row, watching civilians being killed, and did nothing."

"International organisations like the United Nations and the European Union, which are there to be the watchdogs of human rights, did nothing to prevent the suffering of the civilian population," she told MEE.

"Civilians were actually targeted using arms, including Israeli- and Turkish-made drones and cluster munitions, which is prohibited by international humanitarian law," she said.

According to reports from Human Rights Watch, there is evidence of both Azerbaijani and Armenian forces using illegal cluster munitions against civilians.

'We are so disappointed. We didn't start this war and now we face this tragedy'

Armine said that as a result of international inertia, Armenia's enemies could now do "anything they wish". She concluded that, "there is no use in expecting anything from anyone".

What does the future hold? Armenia will survive the current crisis. It has a powerful sense of national identity and roots that stretch back thousands of years. But few governments survive this scale of military defeat and Prime Minister Nikol Pashinyan's position cannot be guaranteed.

The bitter lesson learned in this most recent national tragedy is that Armenia is less likely to trust the West or risk upsetting President Putin.