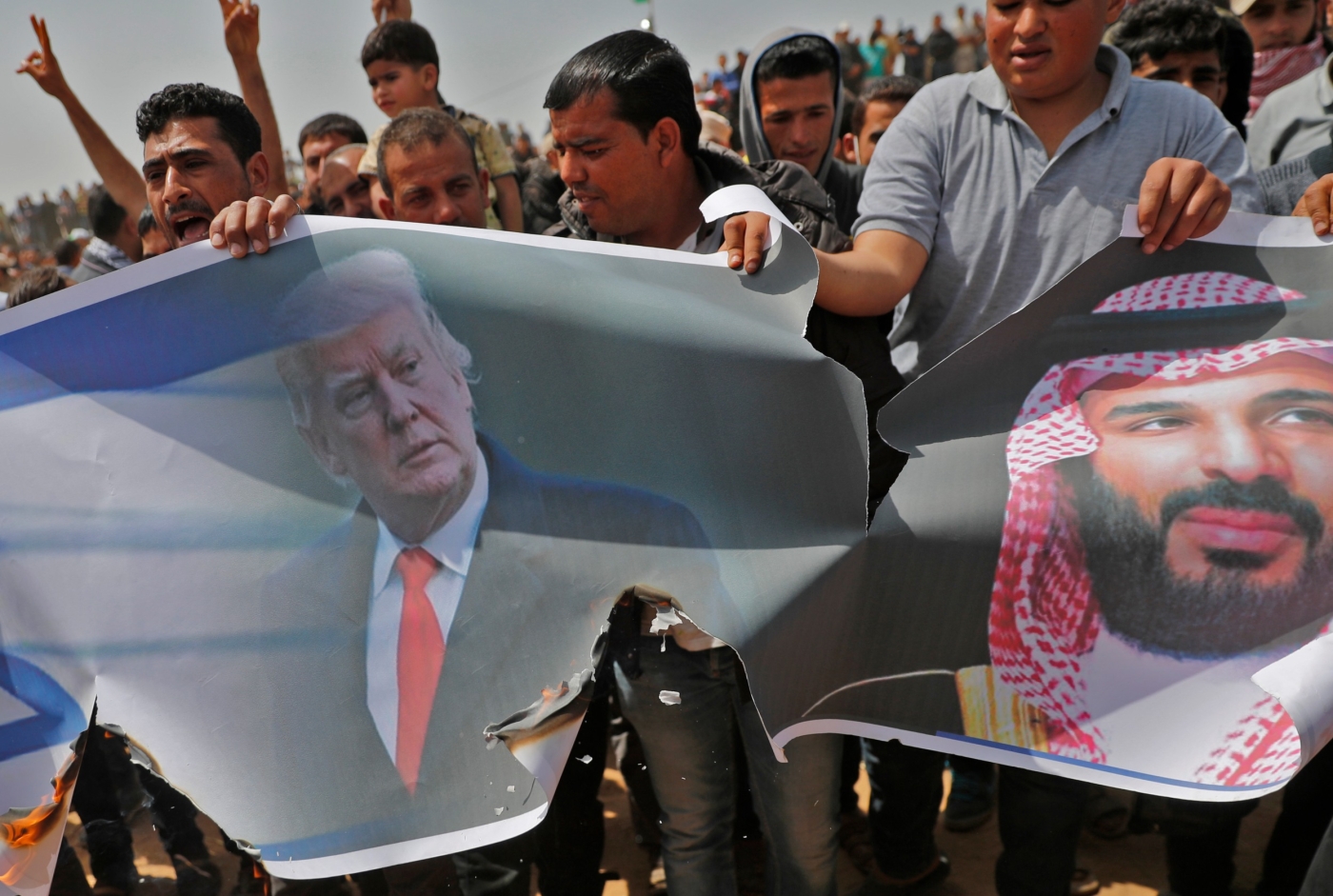 Palestinians prepare to set fire on an Israeli flag and portraits of US President Donald Trump and Saudi Crown Prince Mohammed bin Salman during in the southern Gaza on 13 April 2018. Observers blame the crown prince’s ties to Trump and Israel for the deteriorating relationship with Hamas (AFP)
By
Adam Khalil
in
Gaza City, Gaza Strip

Hamas has recently broken its silence over a spate of arrests of its members in Saudi Arabia since February, casting light on the deteriorating relationship between the Palestinian resistance movement and the Gulf kingdom.

According to Hamas, more than 60 Palestinians, some of them Saudi nationals, have been jailed on charges of collecting donations and funds for the group or expressing support for “the resistance” in their accounts on social media platforms. Some of these individuals have seen their bank accounts frozen and their private companies closed or confiscated.

'Regardless of the explanations for the arrests in Saudi Arabia, this is regrettable, and the authorities in the kingdom should not have been dragged into it'

On 16 September, the Euro-Mediterranean Human Rights Monitor expressed deep concern for the cases of at least 11 Palestinians, arguing that there was “no legal basis for detaining these people without informing their families of their whereabouts by the Saudi authorities”.

Since its inception more than 30 years ago, Hamas has been keen to preserve a balanced relationship with Saudi Arabia despite the two sides’ differing policies on various issues over the past decade.

While Hamas had until now preferred to resolve disputes privately, observers told Middle East Eye they believe the recent arrests could be the straw that breaks the camel’s back amid unprecedented Saudi overtures to Israel.

The most prominent of these detainees is senior Hamas official Mohammed al-Khudari, who was reportedly arrested some five months ago.

The 81-year-old had been living in Jeddah since 1992 and was responsible for managing the relationship between Hamas and Saudi Arabia for nearly 20 years.

According to Abdulmajid al-Khudari, Mohammed Khudari’s brother, Saudi authorities have denied the detainees visits from relatives or lawyers.

Abdulmajid, who lives in the besieged Gaza Strip, told MEE that news of Khudari’s arrest, as well as that of his son Hani, a lecturer at Umm Al-Qura University in Mecca, came as a shock to the whole family.

With official charges yet to be revealed, Abdulmajid said the family had contacted a lawyer and that Khudari’s US-based daughter had twice appealed to the US Congress for help in obtaining Mohammed and Hani Khudari’s release, to no avail.

Khudari's family in Palestine, as well as several Kuwaiti political figures, also appealed to the Saudi Royal Court, without any response, Abdulmajid said.

"Things are complicated and not going for the better," Khudari’s daughter reportedly told her uncle Abdulmajid, as the family remains concerned for Khudari’s health given his history of cancer.

The Saudi campaign has not been limited to Hamas members: dozens of other Palestinians in the country have also been arrested.

Abdulmajid told MEE he believed the dozens of arrests were "not justified" because the detainees had not committed any crime, adding that he suspected the aim was to pressure Hamas and Palestinians more broadly into accepting US President Donald Trump’s so-called "deal of the century" plan.

The head of Hamas's foreign media department, Rafat Morra, reiterated that Hamas was keen on maintaining good relations with Arab and Muslim-majority countries, including Saudi Arabia, adding that the movement had tried addressing the current crisis quietly since it began in February.

According to Morra, Hamas has made “unremitting political and diplomatic efforts” to deal with the arrest campaign, including asking for several regional and international actors - such as Kuwait - to come in and mediate. However, such efforts, Morra said, were met with more arrests, including Khudari’s.

Morra said he believed the arrests were linked to several factors, placing them in the context of a broader plan to target “Hamas, the resistance and the Palestinian cause.”

“There are Israeli attempts to target Hamas and weaken it because it represents the spearhead of the resistance," he told MEE, adding that any targeting of Hamas through arrest campaigns or political and financial pressure, whether inside or outside Palestine, served the Israeli project.

“Hamas is a resistance movement and enjoys wide support in the Arab and Muslim world,” he said. "Regardless of the explanations for the arrests in Saudi Arabia, this is regrettable and the authorities in the kingdom should not have been dragged into it.”

The relationship between Hamas and Saudi Arabia dates back to the beginning of the movement's rise during the First Intifada in December 1987.

A number of its founders and close associates lived in the Gulf kingdom at the same time, where large donation campaigns were launched for the movement and its charitable institutions, some with the official Saudi blessing.

But after 2007, when Hamas seized control of Gaza after armed clashes with rival Palestinian party Fatah, Saudi Arabia accused Hamas of derailing the Mecca Agreement, which had tried to resolve the internal Palestinian dispute; and in doing so insulted its sponsorship of the agreement.

Since then, Hamas has attempted on a number of occasions to revive its relationship with Saudi Arabia.

Meshaal used the occasion to offer Eid greetings to the new king of Saudi Arabia, Salman bin Abdulaziz, but the visit gained little political momentum, except for the successful release of Hamas official Maher Salah.

The election of US President Donald Trump, a staunch Israel supporter, in 2016 has marked another turn in Hamas-Saudi relationships.

In May 2017, during an Arab-American summit held in Riyadh, Trump called Hamas a terrorist group. Nearly a year later, in February 2018, Saudi Minister of Foreign Affairs Adel al-Jubeir followed suit, referring to Hamas as a terrorist group during a meeting with the European Parliament's foreign affairs committee in Brussels - a move which Hamas denounced at the time as a dangerous precedent.

For observers, the arrests mark a sharp shift in the relationship between Riyadh and Hamas, coinciding with the rise of Crown Prince Mohammed bin Salman.

'If Saudi Arabia seeks to curb Hamas and blackmail it politically, it will fail'

“The danger of the arrests in Saudi Arabia is that they coincide with an unprecedented Saudi opening to Israel, a fevered engagement in the promotion and marketing of the ‘deal of the century’ to distort the Palestinian cause and demonise the resistance,” Palestinian political writer Fayez Abu Shammala told MEE.

For Abu Shammala, the arrests are but one aspect of a "total war" waged by Saudi Arabia against Hamas that includes financial sanctions, “sacrificing the resistance on the altar” of an improved relationship with Israel.

While highlighting the seriousness of Saudi policy towards Hamas, Abu Shammala said he saw it as a "transient case" linked to the person of bin Salman, who has fostered a close relationship with Trump and is widely believed to be leading efforts to normalise his country’s relationship with Israel.

But, he said, "if Saudi Arabia seeks to curb Hamas and blackmail it politically, it will fail, just as Egypt has failed to pressure it on similar issues".

Hussam al-Dajani, a professor of political science at Umma University in Gaza, said Saudi Arabia was making a serious mistake in antagonising Hamas, just as its battle with Iran for regional influence reaches heightened levels.

By isolating Hamas, Qatar and other Sunni organisations such as the Muslim Brotherhood, Dajani warned that not only is Saudi Arabia doing a disservice to its anti-Iranian project, but should its relationship with Hamas reach a "complete break", the kingdom may essentially be paving the way for its rival to fill in the vacuum.