'This is art-washing': Israeli activists dog Eurovision with protests

Determined to expose the realities of Israel's occupation and siege of Gaza, a group of young Israelis are staging daily demonstrations 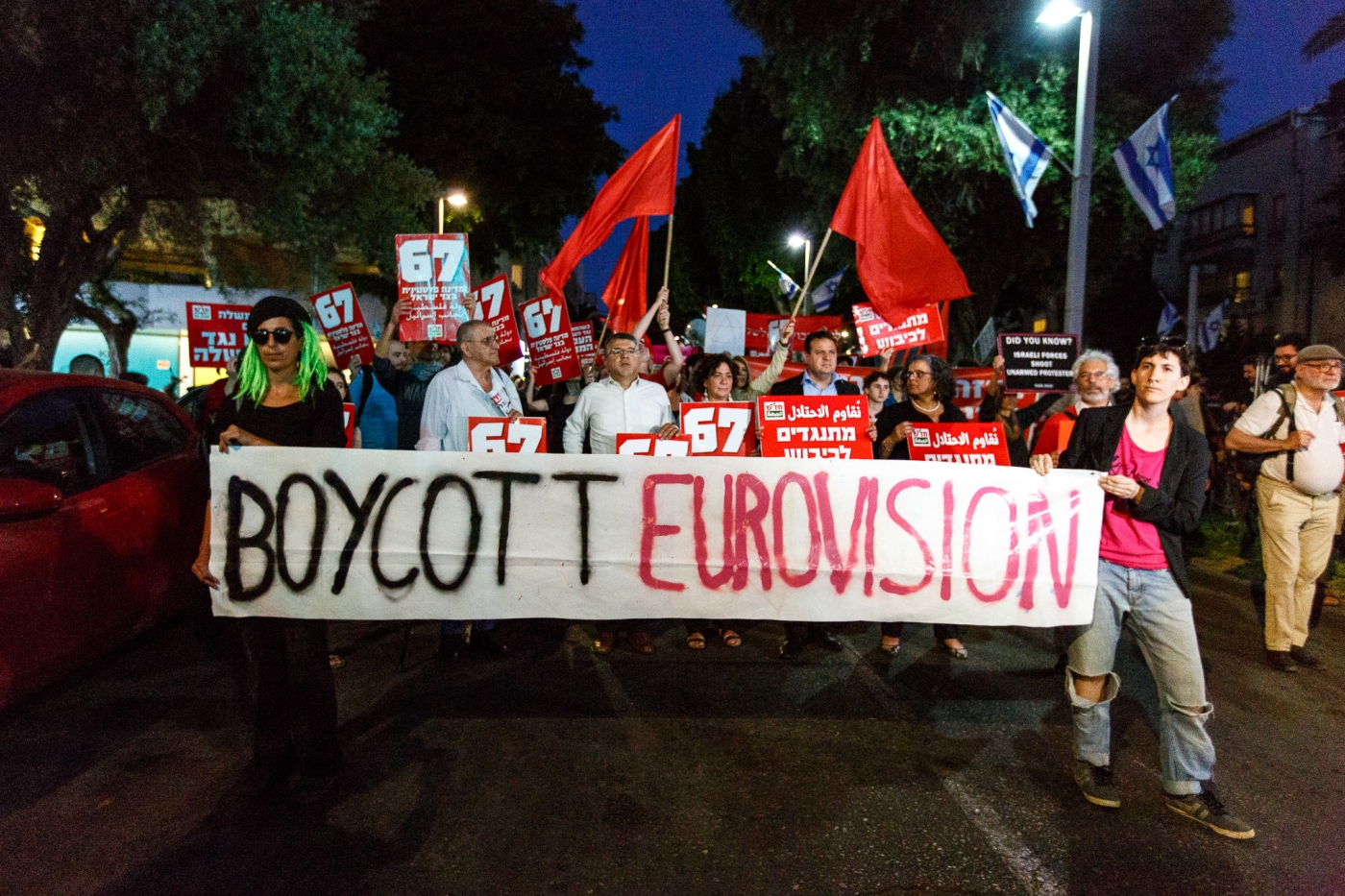 Israelis march against their country's hosting of the Eurovision Song Contest (MEE/Miriam Deprez)
By
Megan Giovannetti
in
Tel Aviv, Israel

This week, hundreds of people have flocked to the Eurovison Village on Tel Aviv beach each day, revelling in the festivities surrounding the song contest that this year has landed in Israel.

But while the scene may appear a benevolent and welcoming atmosphere, a group of Israeli activists has made it their mission to reveal a quite different side to the Eurovision Song Contest 2019.

"We're here because Eurovision, and of course the Eurovillage, is this great, lucrative business that helps Israel promote its so-called values of [being a] young, hip, multicultural, LGBTQ-friendly place, when in fact it's an apartheid state," Shahaf Weinstein, 26, told Middle East Eye.

"This is pink-washing, this is art-washing, and we're against it."

A Jewish Israeli, Weinstein is part of a collective of activists from various groups that have been organising daily protests in recent days against Israel hosting Eurovision and the positive international limelight that comes with it.

I have 'democracy' - that democracy that they are trying to show the world. I have it as a Jew, but Palestinians don't have it

While Israelis and tourists were partying at a beach-side Eurovision village festival on Wednesday, Palestinians were commemorating the 71st anniversary of the Nakba - the "catastrophe" in Arabic - when hundreds of thousands were forced from their homes in the conflict that surrounded the creation of Israel.

On the same day, Weinstein and 12 other activists staged a "die-in" at the venue, demonstrating against the Nakba and Israel's regular killing of Palestinian protesters in the besieged Gaza Strip.

Wearing T-shirts with "Free Gaza" written across the back, the activists played dead by lying on the ground. Hung from their necks were photos of Palestinians killed during Israel's violent crackdown on Gaza's year-long Great March of Return protest movement.

With heightened security in preparation for such protests, five activists were refused entry into the Eurovision village and had their IDs confiscated. Eight more got through the security check and carried out the plan.

"I am Jewish. I have the privilege to be here and protest while Palestinians in Gaza who are protesting get shot," said Omer Shamir, a 26-year-old from Tel Aviv.

"My risk is very little, I have 'democracy' - that democracy that they are trying to show the world," Shamir said. "I have it as a Jew, but Palestinians don't have it."

'We as Israelis are responsible'

At a march through Tel Aviv the night before, Nimrod Flashenberg laid out his reasons for taking to the streets.

"I think we as Israelis, the State of Israel, is responsible for [Palestinian] suffering,” Flashenberg, 28, told MEE. "So we need to say 'enough with the occupation and enough with the siege'."

It was also the first anniversary of the United States officially moving its embassy from Tel Aviv to Jerusalem as 68 Palestinians were fatally shot while protesting at the same time.

The march attracted some 300 supporters, and Flashenberg pointed to a lack of anti-occupation sentiment among Jewish Israelis as a reason numbers were not higher.

Weinstein believes that the right-wing takeover of Israeli politics is "part of the international processes of neo-fascism that we've seen happening in a lot of countries, including in the US [and] in Europe.

"In a lot of places the population is getting more hateful and more Islamophobic and more racist. People are listening less and less."

According to Weinstein, "the occupation continues because of the international community's complicity," which she says is why the protest and boycott actions against Eurovision in Israel are important for her in the fight for Palestinian rights. "Indeed, Israel is working tirelessly on its hasbara," Flashenberg said, using the Hebrew term for the dissemination of positive information, "and has been very successful in its effort to put the Palestinian issue on the sidelines of the international agenda."

Hosting Eurovision, Flashenberg said, is just one example of Israel attempting to normalise its occupation of Palestinian lands.

"To host the Eurovision contest is to pretend as if [Israel] is a normal European, liberal, gay-friendly country," he said.

"So the only way to wake up from this bubble is international pressure, which comes in the form of sanctions and boycotts."

But Shamir doesn't believe that the people around him are "shaken up" enough to burst their bubble of comfortability.

"Generally, I would say Tel Aviv is considered kind of leftist, but many of my friends, my age group, don't come and protest," he said.

"The fact that they are occupiers is still very comfortable [to them], which I think brings us back to the point of why it is important now to emphasise that [Israel] is not a normal place."

Daily protests in the lead-up to the Eurovision final on Saturday is a way of trying to remind people of the reality of Palestinian life under Israeli occupation, Shamir said. Even if it's just "a little pinch".

On Monday, Shamir and other activists projected disturbing images from Gaza on a large screen in front of the Eurovision Village's main stage. Slowly, the dancing crowd beneath it began to understand what they were seeing, and things took a violent turn.

It was all a bit ironic for Shamir, who said that Eurovision was meant to show how peaceful and "normal" Israel is. Instead, "people beat us up and stole our projector and ran away," he said.

Immediately after the "die-in," about a dozen Israelis surrounded her, yelling obscenities and making loud noises to prevent her from being interviewed by the press.

Nani, a woman from Ashkelon, told MEE that she joined the crowd yelling at Weinstein because the young activist is Israeli, and she sees such behaviour as a betrayal.

"She stands in front of Israel, not with Israel, because she wants to free Palestine," Nani said.

Ruthie, 42, thought it was a shame the activists were coming to the Eurovision village to protest.

"They came here, so they should enjoy," she said.

Ruthie came from the far reaches of the southern desert to enjoy the festivities and believes hosting the song contest is a good thing for Israel's image.

"I think that they are protesting because they don't really know the reality and what really happens," Ruthie told MEE. "As you can see everything is good here, this is the reality here. We learn to live with it.

"We came here to enjoy, and we welcome everyone to come to Israel to come and enjoy. It's a very safe place."

Flashenberg lives near the Eurovision village and hears the joyous festivities every night, finding them disturbing.

"There’s something in this international acceptance and international celebration around Israel which is, obviously from Palestinians' eyes and peace-seeking eyes, troubling," he said.