Ibrahim Sharif, who used to head the Waed secular group, had been freed on 19 June Ibrahim Sharif, former chief of the Waed secular group, at his home in the village of Tubli, south of Manama, on 20 June (AFP)
By
MEE and agencies

Bahraini authorities on Sunday re-arrested a prominent Sunni opposition leader for "violating the law", just three weeks after his release from jail, the interior ministry said on Twitter.

Ibrahim Sharif, who used to head the Waed secular group, had been freed on 19 June after spending four years in jail over his involvement in 2011 Shia-led anti-government protests.

He had played a prominent role in the month-long protests and was later among a group of 20 activists tried for plotting to overthrow the Sunni rulers of Shia-majority Bahrain.

The interior ministry did not say why he was re-arrested.

Opposition sources said he was taken back to prison after he criticised the government during a ceremony for one of the victims of unrest that rocked the kingdom, home to the US Fifth Fleet.

The Waed party, whose full name is the National Democratic Action Society, said Sharif was remanded in custody for 48 hours pending investigations on charges of "inciting hatred against the regime".

"The arrest of Sharif is an attempt to silence him and confiscate the freedom of speech guaranteed by the constitution," said Waed in a statement.

Activists believe the charges against Sharif are connected to a powerful speech he gave on Friday night, in which he emphasised the demands of the opposition.

In his speech yesterday, Ibrahim Sharif said the govt is its own enemy by marginalizing people "https://t.co/JOjzGgrmAn #bahrain

Ibrahim Sharif's speech last night was powerful in which he urged people not to settle 4 the minimum like the govt wants them to. #bahrain

Sharif's speech came at a memorial service held for 16-year-old Hussam Alhaddad, who died from injuries in clashes with the police in Muharraq on 20 August 2012, according to activist website Global Voices.

Bahrain's opposition is demanding a constitutional monarchy and an elected prime minister. Diplomacy
US lifts hold on military aid to Bahrain after crackdown 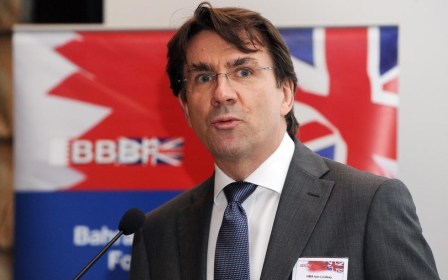