The European Court of Human Rights (ECHR) on Thursday ruled that a French court’s criminal conviction against activists from the Boycott, Divestment and Sanctions (BDS) movement violates the freedom of expression article of the European Convention on Human Rights.

The case dates back to 2015 when France’s highest appeals court upheld rulings against 11 BDS activists charging them with “incitement to economic discrimination” over their participation in protests calling for the boycott of Israeli goods in 2009 and 2010.

“The Court considered that the applicants’ conviction had lacked any relevant or sufficient grounds,” the published text of the ruling read.

“It was not convinced that the domestic court had applied rules in keeping with the principles set out in Article 10 or had conducted an appropriate assessment of the facts.”

The court ordered the French government to pay 27,380 euros ($31,150) in compensation for each defendant.

They are members of the “Collectif Palestine 68”, a local group supporting the international BDS campaign.

In response to the news, Rita Ahmed, a BDS spokesperson, said the ruling deals “a major legal blow to Israel’s apartheid regime and its anti-BDS lawfare.

“At Israel’s behest, European governments, especially in France and Germany, have fostered an ominous environment of bullying and repression to silence Palestine solidarity activists,” she said in a statement.

The decision comes amid calls by Palestinian civil society organisations to western states to hold Israel accountable for its plans to annex large parts of occupied Palestinian territory through deterrent measures including bans on military cooperation with Israel and trade with illegal settlements. 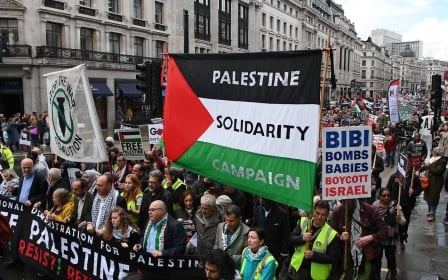