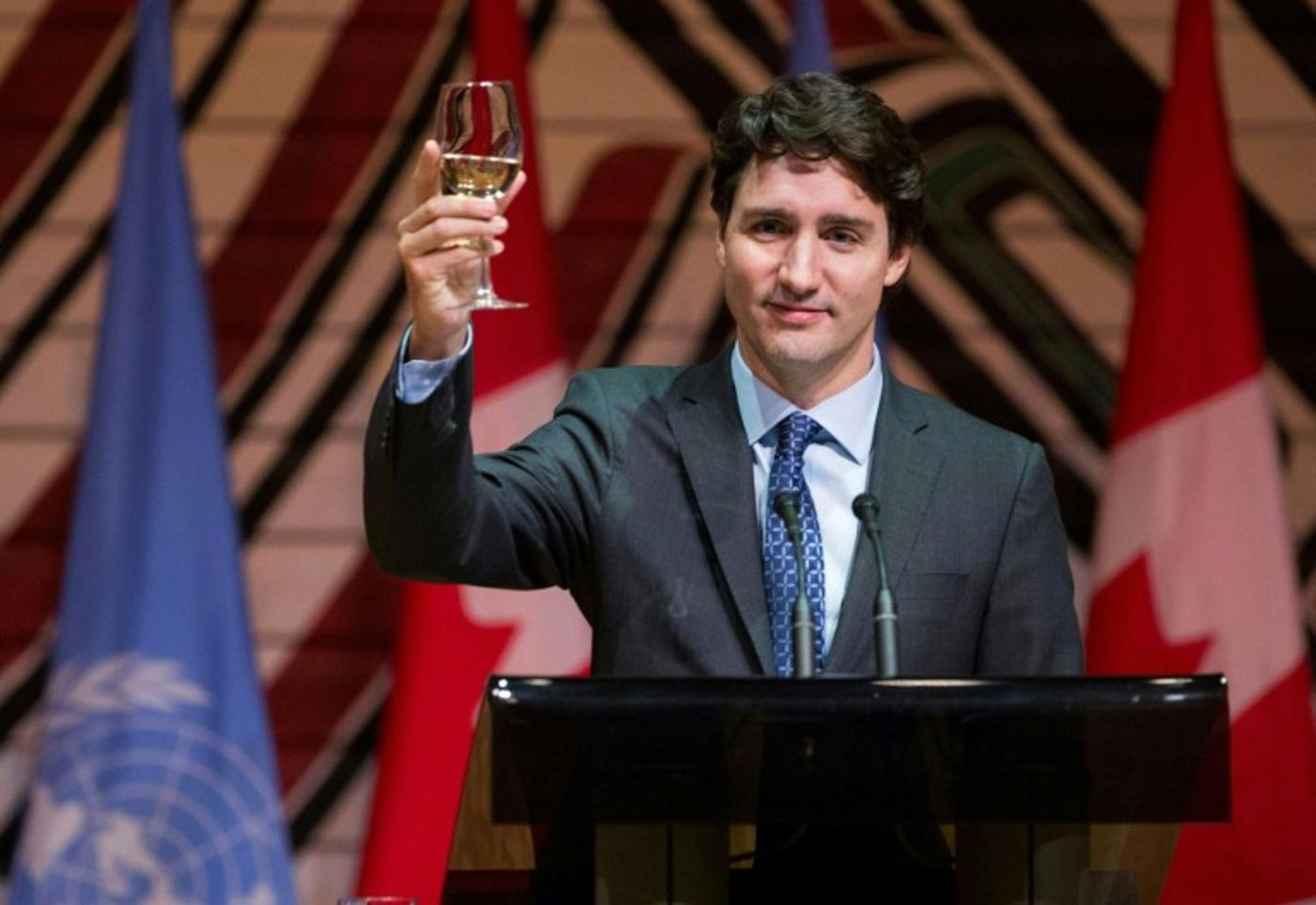 “This has been an empowering moment,” said Thomas Woodley, president of Canadians for Justice and Peace in the Middle East, a Montreal-based advocacy group that supports BDS.

“People see that what we’re doing is having an impact. People are noticing that the boycott is gaining momentum,” Woodley told Middle East Eye.

Launched by Palestinian civil society groups in 2005, the BDS movement seeks to use non-violent means – boycott, divestment and sanctions – to pressure Israel to end its occupation of the Palestinian territories, dismantle the separation wall, ensure equality for its Palestinian citizens, and grant Palestinian refugees the right to return to their lands as gaurenteed by UN Resolution 194.

On Monday, Canadian parliament members approved an anti-BDS motion by a vote of 229 in favour and 51 against.

The motion, tabled by Conservative MP Tony Clement on 18 February, moved that the House of Commons reject the BDS movement and called on the government to condemn any Canadian individual or group that promotes it.

Clement described BDS as “a form of discrimination” that is “anti-Israel”.

“In targeting all Israelis, BDS is a present-day blacklist and a form of discrimination, strictly based on national origin. Just like boycotts have targeted Jews throughout history, today BDS activists call on boycotting people who come from the Jewish state,” Clement said in a debate last week.

The BDS movement does not call for the boycott of Israelis by virtue of their citizenship, but targets products, companies or Israeli-government institutions and initiatives that profit from the violation of Palestinian human rights. Over 170 Palestinian political parties, labour groups and other organisations have endorsed the BDS call.

The motion received the support of Canada’s Conservatives and the Liberal party of Prime Minister Justin Trudeau, which holds a majority of parliamentary seats. About a dozen Liberal MPs refused to vote, and one Liberal voted against it, The Canadian Press reported.

Foreign Affairs Minister Stéphane Dion said last week that the Liberals would support the motion despite having “some reservations” about its form and the Conservative party’s intentions.

“The Liberals do not support this boycott movement because we do not believe it is conducive to achieving peace in the Middle East,” Dion said.

According to Woodley, such widespread support reflects the status quo in Canadian politics on Israel. “It’s two parties trying to outdo one another in showing their support for Israel. That’s part of what’s at the core of this,” he said.

The staunchly pro-Israel group called on Canadian lawmakers to “follow the lead of the United Kingdom” and enact regulations to block public authorities from imposing a boycott against Israel.

Last week, the UK notified public bodies that they could face “severe penalties” if they advocate a boycott of Israeli goods. In France, BDS activists have been criminalised under “anti-discrimination” legislation.

But BDS is slowly growing across Canada, as more Canadians become aware of the campaign and the realities of daily life for Palestinians.

Undergraduate students at McGill University in Montreal passed a successful motion on Monday night in support of BDS. The vote passed by a margin of 512 in favour, 357 against and 14 abstentions, the McGill BDS Action Network reported.

“It is our responsibility to show the international community that McGill students cannot accept our institution's complicity with Israel’s settler colonialism and apartheid, continued violence against Palestinians, and blatant disregard for Palestinian human rights,” the group wrote in a statement prior to the vote.

The United Church of Canada, the country’s largest Protestant denomination with over two million members, voted in favour of boycotting Israeli settlement products in 2012. Last year, the church passed a motion in support of divestment and sanctions against companies and institutions involved in, or profiting from, the Israeli occupation.

The Church joined a handful of other groups – including Independent Jewish Voices, the Canadian Labour Congress and the Canadian Union of Postal Workers – to publicly condemn the parliamentary motion.

Patti Talbot, the United Church of Canada’s team leader for global partnerships, stressed that the church is not a member of the BDS movement, but its focus is on Israeli settlements.

“We’ve been very clear to try to keep our focus on the occupation – the focus that we’ve had on economic action has been to bring attention to the settlement enterprise within the occupied territories,” Talbot told Middle East Eye.

She said the parliamentary motion could have a “chill” effect on Canadian groups seeking a just peace in the Middle East, and it is troubling for freedom of speech and democratic participation in Canada.

“The desire to build peace with justice in the Middle East is pro-Israel, is not anti-Israel, and certainly not anti-Semitic,” Talbot said.

‘A long history of friendship’

The motion said Canada should reject BDS “given Canada and Israel share a long history of friendship as well as economic and diplomatic relations”.

The two countries have indeed maintained close ties for decades.

But the Canada-Israel relationship saw unprecedented growth during the tenure of former Prime Minister Stephen Harper, who made bolstering ties to Israel and publicly defending Israeli policies the main tenet of his government’s policies in the Middle East.

Last year, the Canadian and Israeli foreign ministries signed a Memorandum of Understanding expressing that the parties were “deeply concerned” by alleged efforts to single out Israel for criticism and isolate it internationally, including through BDS.

Canada and Israel agreed to fight these campaigns through “a coordinated, public diplomacy initiative” and by “publically expressing their opposition” to anyone questioning Israel’s right to exist or defend itself.

“The selective targeting of Israel reflects the new face of anti‑Semitism,” the MoU read.

But strong support for Israel crosses party lines in Canada.

In a letter sent to a Canadian Friends Service Committee clerk last July – and obtained by MEE – when he was still an opposition MP, now-Prime Minister Justin Trudeau wrote that the BDS movement, along with Israeli Apartheid Week, is “not about our shared Canadian values of respect, openness, and engaging with each other”.

“This movement makes Jewish Canadians feel unsafe, and as such, it is something we have to take a firm stand against,” Trudeau wrote.

Last March, Trudeau also said he was “disappointed” that students at his alma mater, McGill, had put forward a motion to endorse BDS on campus. “The BDS movement, like Israeli Apartheid Week, has no place on Canadian campuses,” Trudeau tweeted.

Even the left-leaning New Democratic Party (NDP) has fallen in line with the pro-Israel consensus on Parliament Hill.

This is especially true under the leadership of Thomas Mulcair, who once declared that he was “an ardent supporter of Israel in all situations and in all circumstances”. Mulcair also once condemned a fellow NDP parliament member over her support for the BDS movement.

“To say that you’re personally in favour of boycott, divestment and sanctions for the only democracy in the Middle East is, as far as I’m concerned, grossly unacceptable,” Mulcair said in his criticism of former NDP MP Libby Davies in 2010.

During last year’s federal election campaign, the NDP forced a candidate to resign or be fired after comments he made that were critical of Israel surfaced on a Conservative attack website.

The NDP said it would vote against the anti-BDS motion because it went against freedom of expression, not because it supports BDS. “The New Democratic Party does not support BDS,” NDP MP Murray Rankin said.

“I oppose a motion that would ‘condemn’ Canadians who ‘promote’ certain views, even if those views are not views that I share,” he said last week.

Legge said the group’s settlement boycott is in line with Canada’s official position on Israeli settlements – that they are against international law – which makes the anti-BDS motion that much more puzzling.

“When there’s this government motion which is claiming that BDS is merely an attempt to demonise the state of Israel, it’s just utter nonsense.”

Meanwhile, Woodley said that since the motion was tabled, CJPME has run out of “boycott Israel” stickers, which it has encouraged Canadians to affix to Israeli products in their local stores.

“The response has been superb. We ran out of our first order of sticky note pads and we’re ordering more to keep up with the demand,” he said.

Talbot also said the response to the United Church of Canada’s position has been extremely positive. “It has affirmed the importance of this work, if anything,” she said. “We’re convinced that we’re not alone in this.”