Child and doctor killed as anti-Bashir protests continue across Sudan KHARTOUM - It was another bloody day in the Sudanese capital as a child and a doctor were killed in anti-government protests calling for an end to President Omar al-Bashir's decades-long rule, witnesses and medical sources confirmed.

The central committee of Sudanese doctors said the two died at Royal Care International Hospital in Khartoum on Thursday after police dispersed hundreds of protesters marching towards the presidential palace.

The pair were killed "due to the excessive violence used against the protesters", the committee said in a statement.

It said they were killed with "live ammunition", but did not specify who had fired the shots, AFP reported. A police spokesman could not be reached immediately for comment, the news agency said.

Sudanese officials say 24 people have been killed in anti-government demonstrations since they erupted last month, while human rights groups put the death toll across Sudan at more than 40.

The rallies began in response to increasing living costs and rapidly morphed into a wider call for Bashir to step down as they spread to several parts of the country, including the war-torn Darfur region.

“They even arrested some doctors and other employees of the hospital," it added.

At least nine people were injured in the rallies in Khartoum on Thursday, as eyewitnesses told Middle East Eye that security forces fired live ammunition and tear gas at protesters.

As security officers quickly dispersed the main rallies in the centre of the city, the demonstrations spread to residential areas on the outskirts of the capital.

In Burri, a residential district of Khartoum, protesters shut down the main roads, while police and other security forces fired live ammunition and rubber bullets.

Ali Majid, an activist in Burri, said police raided local homes in their effort to track down the protesters.

“Burri is now being blocked by the police and the security services," he said, adding that protesters had been beaten.

An opposition activist who spoke to MEE on condition of anonymity in fear of reprisals, said protests in the centre of Khartoum aim to send a green light to anti-government activists in other parts of Sudan to go ahead with their own rallies.

If you look at the cities that demonstrated on Thursday, you will realise that the entire country is rejecting Bashir's rule

“We know from the beginning that the authorities will not allow us to reach the presidential palace, but the protests downtown are a kick-off signal for revolutionists in the residential areas to go ahead," the activist said.

"We succeeded in our aim of distracting the security services."

Accordingly, the protests spread on Thursday to several residential areas of Khartoum, as well as to other cities.

Another opposition activist, who also spoke to MEE on condition of anonymity, said protests were held in at least 13 cities throughout the day, including Port Sudan, the Red Sea city in the country's east, Aldaien and Algenena in the Darfur region, and Atbara, where the first protests were held on 19 December.

”If you look at the cities that demonstrated on Thursday, you will realise that the entire country is rejecting Bashir's rule," he said.

The protests, which have led to the unprecedented calls for Bashir's removal, have been led by the Sudanese Professionals Association (SPA).

The association includes dozens of sub-groups representing teachers, doctors, engineers, pharmacists, journalists, musicians, artists and other professionals across the country.

A member of the SPA secretariat told Middle East Eye that the association intends to diversify its tactics in order to put more pressure on Bashir.

The Sudanese president has so far resisted demands to step down, blaming the ongoing unrest in Sudan on unidentified Western forces.

Bashir has also said political change will only come at the ballot box, not through demonstrations, and vowed to stay on in order to maintain stability in the country.

I am very concerned about reports of excessive use of force, including live ammunition, by Sudanese state security forces

The SPA source said the association intends to hold protests at night in residential areas in order to tire out the Sudanese security services.

“Our ultimate goal is to declare a general strike as the last step in bringing down this criminal regime," he said.

Meanwhile, the United Nations condemned the use of force against the protesters, urging the government to guarantee Sudanese citizens' rights to free expression and assembly.

"I am very concerned about reports of excessive use of force, including live ammunition, by Sudanese state security forces," UN High Commissioner for Human Rights Michelle Bachelet said in a statement on Thursday.

"I also call on the authorities to ensure that all those arbitrarily detained for the exercise of their rights to freedom of peaceful assembly and expression are promptly released and that these rights are fully protected," Bachelet said.

The UN Security Council called on Sudan to respect the rights of protesters and to investigate the violence.

"We are appalled at reports that security forces have used tear gas and violence within hospitals against those being treated and against doctors providing medical assistance," British Deputy Ambassador Jonathan Allen said on Thursday, as quoted by AFP news agency. 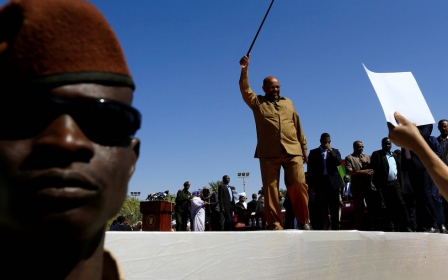