At least 142 people were killed on Friday in four suicide bombings that targeted mosques attended by Houthi supporters in the Yemeni capital of Sanaa, according to medics.

The medics said more than 350 people were injured in the attacks, which have been claimed by a previously unknown branch of the Islamic State group in the country.

A group calling itself IS claimed responsibility for the attacks in a statement published online, using the same website that IS claimed Wednesday's attack on the Bardo Museum in Tunisia, according to reports.

The previously unknown Sanaa branch of IS warned that the bombings were "just the tip of the iceberg".

"Infidel Houthis should know that the soldiers of the Islamic State will not rest until they eradicate them [...] and cut off the arm of the Safavid (Iranian) plan in Yemen," the statement said.

Casualty numbers are not confirmed and could rise further - an unknown number of children were killed in the attacks.

One bomb exploded inside Badr mosque in southern Sanaa during noon prayers, which was followed by a car bomb at the gate as worshippers fled, witnesses said.

A third suicide bomber targeted Al-Hashush mosque in northern Sanaa, while a fourth struck outside the mosque, according to the Saba news agency, which is now controlled by the Houthis.

"We will understand the exact numbers of [the] dead and wounded soon," the editor-in-chief of Yemen Post newspaper, Hakim al-Masmari, told Al Jazeera. "These are two very central and commonly used mosques."

"The heads, legs and arms of the dead people were scattered on the floor of the mosque," Mohammed al-Ansi told AP. He added that "blood is running like a river".

Murtada al-Mahtoori, an influential Shiite religious cleric and supporter of the Houthis, was among those killed.

In a separate attack, another suicide bomber blew himself up outside a mosque in the northern Houthi stronghold of Saada, a source close to the militia said.

Only the assailant was killed in that explosion, and tight security at the mosque prevented the bomber from going inside, the source added. 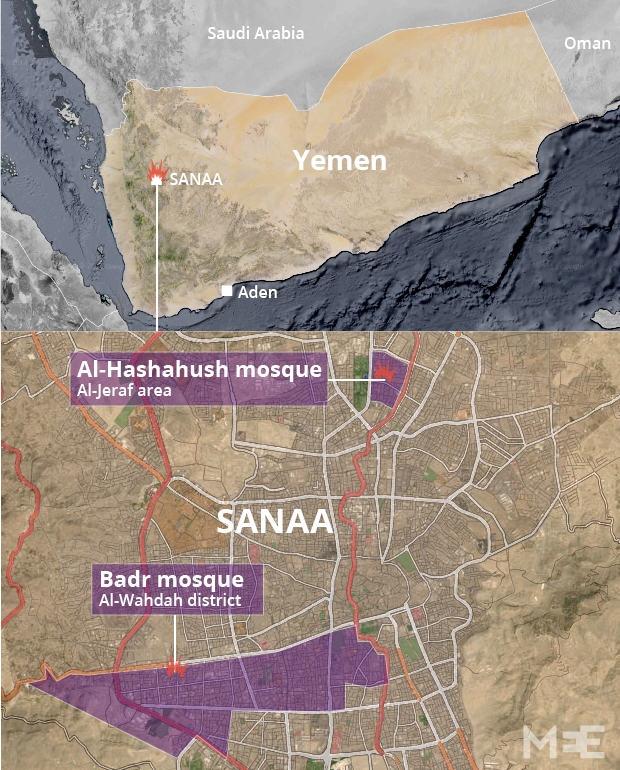 The Houthis, who follow Zaydi Islam - an offshoot of Shiism, overran Sanaa in September and are accused of receiving support from Iran.

It is the first time that IS has claimed any attacks in Yemen, where rival militants al-Qaeda in the Arabian Peninsula (AQAP) have been the strongest jihadist group.

AQAP's policy, unlike IS, bans bombing mosques and the group has issued a statement denying responsibility for Friday's bombings in Sanaa.

Nobel peace prize laureate Tawakkol Karman, a member of the Muslim Brotherhood al-Islah party, tweeted that the revolution youth council had called on people to head to the hospitals to donate blood for those injured in the “terrorist attacks”.

Yemen analysts responded to the bombings by saying the targeting of mosques fundamentally undermines the country's culture.

“This is an absolutely horrific attack on a humanitarian level – we’re talking people being targeted at prayer, which is something that by any cultural norms, but especially by Yemeni cultural norms is absolutely disgusting,” said Adam Baron, a visiting fellow at the European Council on Foreign Relations.

Baron said the “unprecedented” attack opens up Yemen to the possibility of sectarian violence on a level the country hasn’t seen before.

“Yemenis have always looked at the sectarian violence in countries like Iraq, Syria and Lebanon and thought ‘this could never happen here.’ Because in Yemen there’s never been this idea of a Shiite or Sunni mosque, people just go and pray at whatever’s closest to their house or whichever’s most convenient.”

“So what you had today was two mosques that were targeted specifically because of their leadership affiliation with the Houthis movement. Both of the heads of the mosques are prominent Zaydi clerics. So this is essentially an attack where you saw the Zaydis being targeted as Zaydis, which is very disturbing.”

Sanaa residents said the city was "tense" on Friday evening, with locals expecting Houthi militiamen to carry out raids to round up political opponents.

“It’s very tense right now, there are a lot of Houthi patrols on the street," said Hisham al-Omeisy, a Yemeni analyst and communications consultant based in Sanaa.

“The Houthis and the state does not differentiate between IS and AQAP. They are viewed as two sides of the same coin. Houthis treat Islah, IS, AQAP and now Hadi as being partners.

“It doesn’t matter if it was IS or AQAP claiming the attack – they’ll go after their opponents equally, including Hadi and Islah, which is one of the reasons the city is very tense tonight because we’re expected the Houthis will be targeting Islah party members in the capital.”

Later, Houthi militants stormed the house of an influential Sunni cleric in capital Sanaa and abducted two guards, a source close to the cleric said.

The house was vacant at the time of the raid and was only manned by guards, the source added.

It was not immediately clear whether the raid was related to the mosque attacks.

Meanwhile, the US, which has carried out a controversial long-term drone bombing campaign in Yemen aimed at AQAP militants, “strongly condemned” Friday's attacks.

“We express our condolences to the families of the victims, we deplore the brutality of the terrorists who perpetrated today’s unprovoked attack on Yemeni citizens, who were peacefully engaged in Friday prayers,” White House spokesperson Josh Earnest told reporters.

UN Secretary General Ban Ki-moon also condemned the bombings and called on all sides to peacefully solve their issues.

“All sides must abide by their stated commitments to resolve differences by peaceful means, and should engage in good faith in the ongoing UN-facilitated negotiations in order to reach a consensus agreement,” he said in a statement.

The mosque attacks came a day after clashes in the southern city of Aden, which pitched forces loyal to President Abdrabbuh Mansour Hadi against supporters of former president Ali Abdullah Saleh.

Hadi has been in Aden since February, after he fled Houthi imposed house arrest in Sanaa.

Warplanes targeted Hadi’s presidential compound in Aden on Friday for a second day. Hadi’s aides said he was unharmed.

Elsewhere in south Yemen on Friday, security officials told the AP that AQAP had taken control of Houta, capital of Lahj province. AQAP militants were reportedly driving through the city in vehicles waving their characteristic black flags.

The AP said AQAP have now taken over Houta’s security headquarters, the governor’s office and the intelligence headquarters, which is home to prisons containing AQAP militants.

The security officials said forces loyal to ex-president Saleh surrendered without a fight and that those who did resist at the governor’s office were killed on the spot by AQAP militants.

Separately, Houthi militiamen tried to take control of the oil-rich Marib province but were pushed back by tribal forces.

Marib is not only rich in oil and gas resources but additionally houses electricity stations that provide power to the capital and other parts of the country. Local tribes – mainly comprised of Sunni Muslims – have pledged to resist the Houthi advance and are backed financially by Saudi Arabia, according to their Houthi opponents. 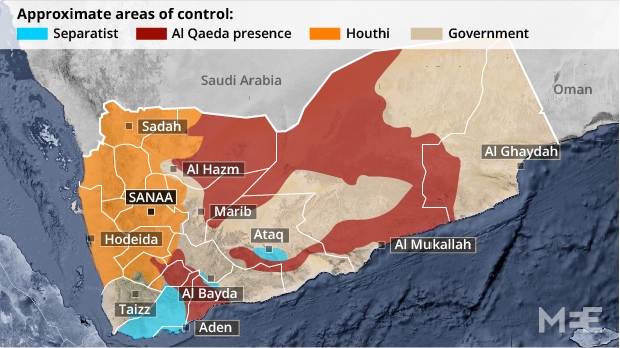