Tunisia, Mauritania and war-ravaged Yemen are among over 70 countries slated to receive emergency funds from the International Monetary Fund (IMF) and the World Bank to strengthen their efforts to battle the rapidly spreading coronavirus pandemic.

The Washington-based IMF has moved to rapidly leverage its $1 trillion lending capacity as it faces unprecedented calls for financing from over 100 countries. The World Bank, meanwhile, expects to deploy up to $160bn over the next 15 months to help those most in need and prop up vital businesses.

Developing countries have appealed for urgent funds to provide front-line health services and keep economies afloat in the face of what is thought to be the worst global economic downturn since the 1930s Great Depression.

On Friday at a meeting with the IMF and World Bank, African Union chairperson and president of South Africa Cyril Ramaphosa said that African countries, including Egypt, Tunisia and Morocco, faced "large financial gaps".

"This pandemic has already had a devastating impact on Africa, and its effects will deepen as the rate of infection rises. It is a setback for the progress we have made to eradicate poverty, inequality and underdevelopment," Ramaphosa said.

"While recent announcements from international partners are very welcome, large financing gaps remain and greater support is needed to ensure that African countries are able to respond effectively to the health crisis and address economic challenges."

Last week anti-poverty charity Oxfam estimated that one billion people, or up to eight percent of the global population, could be forced into poverty as governments shut down entire economies to manage the spread of the virus.

"This could set back the fight against poverty by a decade, and as much as 30 years in some regions such as sub-Saharan Africa and the Middle East and North Africa," the charity said, as it called for the cancellation of $1 trillion worth of developing-country debt payments in 2020.

In its World Economic Outlook, released on Wednesday, the IMF projected that the MENA economies will shrink by 3.3 percent during 2020, partly as a result of the pandemic.

Earlier this month, the IMF approved a $745m to Tunisia, whose vital tourism sector has taken a hit due to the pandemic.

The country's economy is set to shrink by up to 4.3 percent, the steepest drop since independence in 1956, Reuters reported. The tourism sector is expected to see 400,000 people losing their jobs this year and $1.4bn in revenue losses.

Tunisia currently has 864 reported cases of Covid-19, with 37 deaths.

The occupied West Bank and Gaza have secured a $5m emergency loan from the World Bank for essential equipment including ventilators and test kits. There have been 418 confirmed cases across the West Bank and Gaza and two deaths. Gaza, the densely packed coastal enclave, has been under Israeli blockade since 2007, affecting the supply of medicines, laboratory materials and equipment.

Lebanon, which was already facing its worst financial crisis in recent history, has secured $40m from the World Bank.

In March, the government defaulted on a $1.5bn debt payment. The cost of living has risen sharply and the economy has spluttered to a halt.

The funds are set to equip hospitals and improve risk communication to the population, which includes one of the world's largest refugee populations. So far, 672 people have been confirmed to be infected with the disease, while 21 have died.

Mauritania, which has just seven confirmed cases and one death, is set to receive $5.2m from the World Bank.

"Our objective is to strengthen preparedness and containment capacity, as well as improve detection and surveillance, and continue training medical staff on case-management in order to protect the population," said Laurent Msellati, World Bank country manager.

The country has received $7.9 from the World Bank to fund a coronavirus emergency plan.

"The World Bank is mobilising quickly to support Egypt's emergency response activities and the implementation of a preventive plan to confront the Covid-19 outbreak," said Marina Wes, World Bank country director for Egypt, Yemen and Djibouti.

Yemen, which is in the grip of a civil war, has received a $26.9m grant from the World Bank.

The pandemic poses a particular risk in Yemen, for after five years of war, the health system is on the brink of collapse.

Less than 50 percent of healthcare facilities are functional, while the country suffered one of the worst cholera epidemics in recorded history in 2017.

The grant will seek to strengthen the country's fragile healthcare system, including in the detection, containment and diagnosis of Covid-19.

Just one case has been detected in the war-ravaged country, as it braces for what could be a fresh humanitarian disaster.

Morocco has received $275m from the World Bank. The country's economy minister said this month that he was confident that the economy could withstand the short-term economic impacts of the pandemic.

"In addition to our foreign exchange reserves, which cover more than five-and-a-half months of imports of goods and services, we benefit from the support of our bilateral and multilateral donors," he said on 3 April.

Coronavirus
Coronavirus will cause biggest shock to Middle East economy in 40 years: IMF 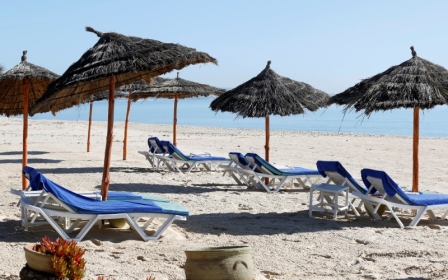 Coronavirus
Coronavirus may cause 400,000 travel-related job losses in Tunisia