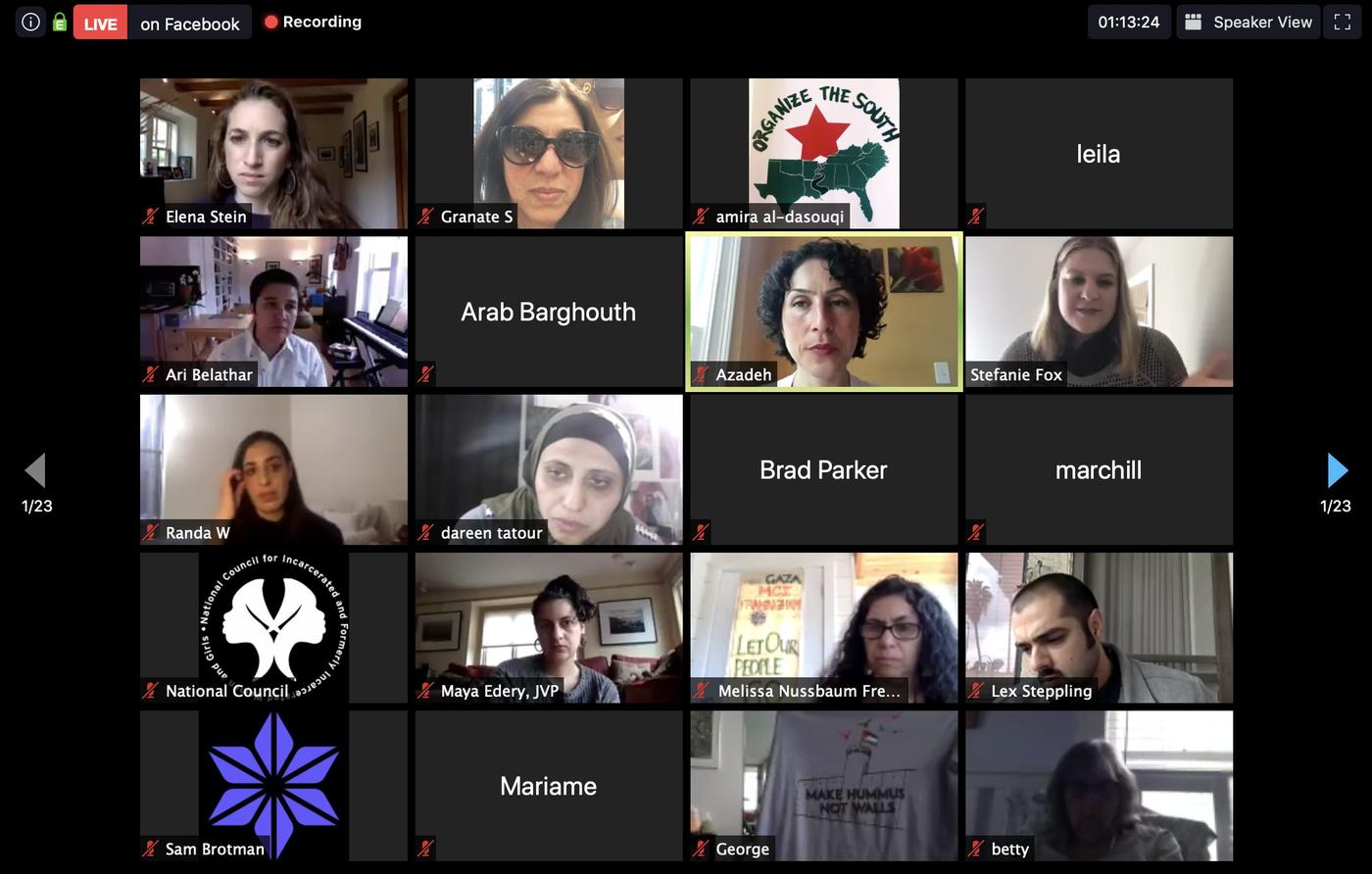 Activists were not able to take to the streets for Palestinian Prisoners' Day this year because of the coronavirus pandemic, but that did not stop the movement from gathering.

More than 600 people on Friday attended the Jewish Voice for Peace's hour-long interactive webinar, tuning in to hear activists and experts speak about prison systems "from Rikers Island to Palestine". While 17 April is officially the day to commemorate Palestinian prisoners specifically, the global coronavirus outbreak has sparked a global response from activists who are calling to release prisoners out of fear that the virus may ravage the close-quarters of the incarcerated.

Friday's event began with a presentation from Marc Lamont Hill, a well-known professor and activist who was fired by CNN in 2018 after speaking critically of Israel at the United Nations.

"Today when we talk about Palestinian prisoners, we're talking about a global struggle against mass incarceration. Right now, we are in a moment where nation-states, particularly Israel and the United States, but many others, are using the prison to resolve all of our social contradictions," Hill said.

"Poverty, mental illness, drug addiction, political dissent, occupation - all of these things are resolved at the level of imprisonment," he said.

There are currently about 5,000 Palestinians being held in Israeli jails, including 183 children. At least 432 prisoners have not been charged and are being held without trial, indefinitely, under Israel's "administrative detention" mechanism.

"These are people... who have not been convicted of a crime - we're not sure if they've done anything [criminal] even in the eyes of the state - and yet they're still sitting in prison," during a pandemic, Hill said.

At least 700 of the Palestinians confined in Israeli prisons suffer from chronic illnesses and other underlying conditions that make them especially vulnerable during the Covid-19 pandemic, according to Palestinian lawmaker Hanan Ashrawi.

In a statement released for Palestinian Prisoners' Day, Ashrawi said that since the outbreak of the pandemic, Israeli forces have detained a further 357 Palestinians across the occupied West Bank and East Jerusalem, including 48 children.

Israel has long been accused of using a myriad of "racist and illegitimate laws that deny them their basic rights to due process and justice", Ashrawi said.

At the JVP rally, Hill pointed to Dareen Tatour, another speaker at the event, who was tried and convicted by an Israeli court in 2018 for "inciting violence" and "supporting a terrorist organisation".

The main evidence of her so-called incitement came in the form of a poem posted to social media entitled "Qawem Ya Shaabi Qawemahum", which translates to "Resist my people, resist them".

"My dear friend Dareen Tatour was forced into a prison because of a poem [she] wrote on Facebook. This is what we're dealing with at this moment," Hill said. "We're dealing with a moment where liberation will only come if we recognise that the prison is being overused, number one, and number two, is an unsafe space."

During Friday's event, Tatour, who was released after spending around five months in prison, shared a different poem, one she wrote during her 2018 incarceration.

Tatour also shared a word of caution to those feeling the sting of confinement during lockdowns that are aimed at curbing the spread of the coronavirus.

"In these days of coronavirus, the lockdown has been in effect for one month only and yet people have started to complain. They compare this lockdown to an imprisonment they are unable to tolerate," Tatour said. "As a former prisoner who has suffered from the darkness and tightness of Israeli prisons, let me tell you this: What you are living through is a blessing, not an imprisonment.

"This comparison is not correct… you are locked down for your own safety and health for the safety and health of your loved ones. Our prisoners, however, are rotting in the occupation's prisons and they have been there for years. Their health is deteriorating every day because they are thrown in small cells with no window, no light, no air," Tatour said.

Participants of the JVP event on Zoom could click a wide view option on the platform to see thumbnail video streams of hundreds of others watching. Following Tatour's message, several seemed to be brought to tears.

The event was interactive, asking participants to take part in several activities, including a sign-making session where activists were encouraged to make protest signs to post on Twitter with the hashtag #PalestinianPrisonersDay.

There is no social distancing in prison! Free prisoners now, from Rikers Island to Palestine! #PalestinianPrisonersDay pic.twitter.com/Zg27PBYpoo

Later, the rally took another break for action, where participants, in solidarity with American prisoners, were given the phone numbers of their district's lawmakers to call.

All at once, activists were seen on the video feed holding phones to their ears and making calls to legislators, demanding prisoners be released during the pandemic.

"America is the largest incarceration of any nation in human history," Hills said.

"There are people who are in prison right now in the United States who are only in jail because they don't have enough money not to be in jail... any system that keeps you in prison because you are poor is an evil one and we must dismantle it".

"Now this is a daily problem," not just an issue to be highlighted during the pandemic, Hill said. "Every day is Palestinian prisoners' day, every day is mass incarceration day in the United States."

Bassem Tamimi and his daughter Ahed, both Palestinian activists from the West Bank's Nabi Saleh village, also spoke at the event, stressed the need for ongoing prison advocacy.

"I wish that our stand for prisoners isn’t just on Prisoners' Day, but every day  in all places, from all people. We need to organize,  so even if we aren’t able to free them, they will at least know we’re with them and haven’t forgotten them in prison ," Bassem said.

Both father and daughter have been imprisoned by Israel in the past, as have many of their friends and family.

"There should be freedom for prisoners from all Israeli prisons especially now because of coronavirus," Bassem said. "They aren’t given any treatment or protection . We have to stand and support them right now."

Several other activists from Palestine and the United States spoke at the event, including Arab Barghouti, the son of Palestinian political leader and hunger strike organiser Marwan Barghouti.

Seen as one of the main leaders of the Second Palestinian Intifada, or Uprising, Marwan was arrested in 2002. He was convicted on several charges of murder for his political involvement in the uprising and given five life sentences. During the trial, Barghouti refused to defend himself, saying the Israeli judicial system was illegal and illegitimate.

Despite being imprisoned, Marwan consistently shows up at the top of the list of presidential polling surveys in the occupied West Bank.

Arab said that he always fears for his father's life in an Israeli prison, but during the coronavirus outbreak his fears have been intensified.

"As a son and a family member of someone who is in prison, I want to tell you all, I am really worried," he said. "And to be honest I'm really sick and tired of being worried about my father's life and my father's health because this is not the first time. The Israeli government and prison authority have a really bad track record of not dealing with the Palestinian people and Palestinian prisoners as human beings."

Arab said he appreciated the JVP event taking an international view of imprisonment because, for him, imprisonment is an interconnected system that needs to be dismantled within the world's shared culture. 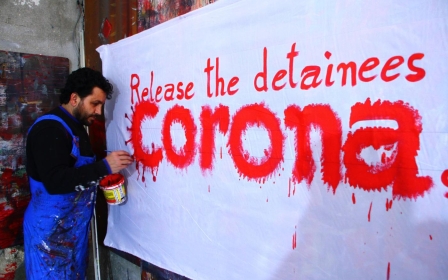 Covid-19
Coronavirus and the Middle East: Call for release of prisoners grows