Move comes as reported daily deaths from new coronavirus fall to 73, the lowest since 12 March Iran allowed some businesses in the capital Tehran to re-open on Saturday as the country's daily death toll from the coronavirus fell to 73, the lowest in more than a month.

So-called low-risk businesses - including many shops, factories and workshops - resumed operations in Tehran, a week after re-opening in the rest of the country, state television said, according to Reuters.

Television footage showed health inspectors visiting shops and reminding a baker that he was required to wear a mask despite working near a hot oven. Other inspectors were seen controlling stores where employees handed out gloves to customers. The re-opening came as reported daily deaths from the new coronavirus fell to 73, the lowest since 12 March. That brought the total death toll to 5,031, health ministry spokesman Kianush Jahanpour said. Saturday also marked the fifth consecutive day with a death toll under 100 in Iran, one of the worst-hit countries in the Middle East.

High-risk businesses including theatres, gyms, saunas, beauty salons, and shopping centres have yet to re-open, and restaurants are open only for take-away orders.

Schools and universities remain closed, and a ban on cultural, religious and sports gatherings has been imposed. Iran may also ban public events marking the holy Muslim fasting month of Ramadan, which starts in late April.

The total number of people diagnosed with Covid-19, the disease caused by the new virus, reached 80,868 as the country recorded 1,374 new cases in the past 24 hours, the spokesman said on state TV.

A parliamentary report released earlier this week, however, suggested the coronavirus death toll might be almost double the figure announced by the health ministry, and the number of infections eight to 10 times more.

Some Tehran residents said they were concerned about the outbreak but had to go back to work as their livelihoods depended on it.

"I don't think it's safe yet," Reza Jafari, a salesman at a handbag wholesaler in the capital told AFP.

"I had to get back to work for financial reasons. If I had the option I wouldn't, but if the shop remains closed longer we could get laid off."

Jafari, speaking by telephone, said retailers from other provinces had flocked to the store on Saturday to refresh their stocks, and that most shopkeepers and customers did not wear masks or gloves.

There was heavy traffic in Tehran on Saturday, and people applying for state support crowded some offices, drawing warnings from officials about a resurgence of the virus.

"The coronavirus is still in an epidemic stage in Tehran... and the heavy traffic is a cause of increased concern," state media quoted Alireza Zali, head of the government-run coronavirus task force in the capital, as saying.

Many government offices had already re-opened last week, with one-third of their staff working from home. 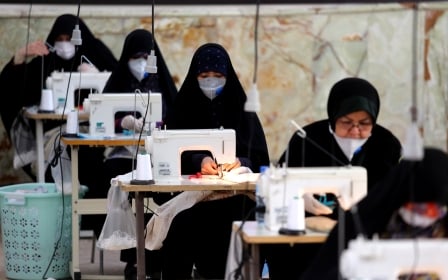