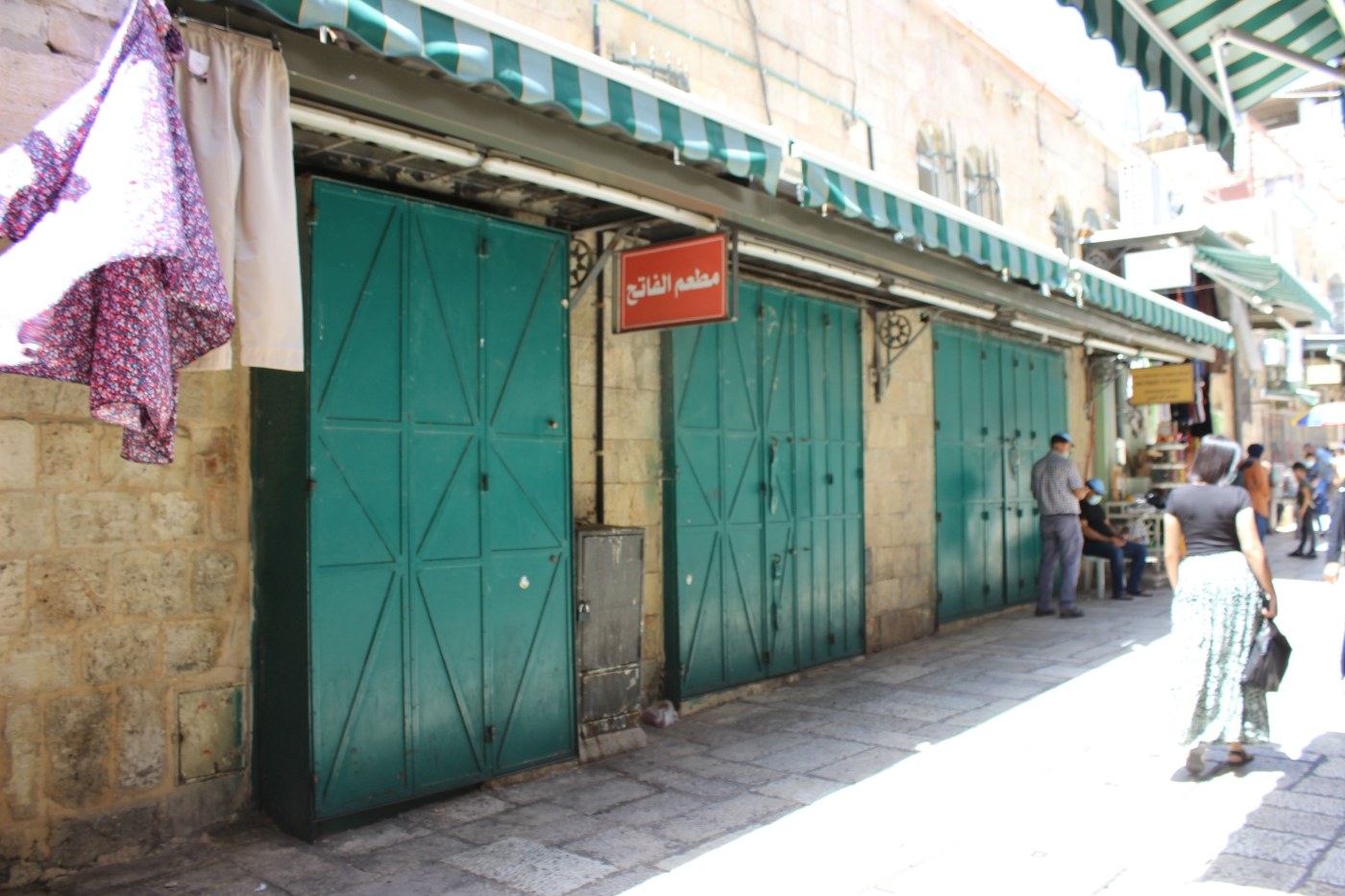 Al-Wad street used to be one of the busiest, most vibrant souks in the area (MEE/Aseel Jundi)
By
Aseel Jundi
in
Occupied East Jerusalem

Visitors to Jerusalem's Old City will find that nothing is the same as before the arrival of the coronavirus pandemic.

On Saturdays, the area's bazaars and alleyways used to bustle with people, whose numbers would increase threefold compared to the rest of the week, browsing through the wares sold by mainly Palestinian shopkeepers.

However, the scene within the Old City walls has been transformed. People no longer head to the souks due to fears of using public transport, while arbitrary fines by Israeli police are another hindrance.

Once you enter the Old City from the Damascus Gate, you find yourself on either al-Wad street or the Khan al-Zeit souk. These used to be the busiest and most vibrant souks in the area.

But now there is an almost complete absence of commercial activity. And for the few vendors still to be found sitting idly in front of their shops, the main topic of discussion is the latest news on the coronavirus and the fate of their businesses.

Even before the pandemic hit, the Old City had been facing a series of challenges that had deterred people from going to the souks and bazaars.

“Jerusalem has always been one of the busiest Palestinian cities, commercially speaking," said Tariq al-Amouri, who has sold children's clothes in the heart of the Khan al–Zeit souk since 1995. "But the erection of the separation wall [between Jerusalem and the occupied West Bank since 2002] dealt a great hit to the traders of East Jerusalem, because it hindered the arrival of West Bank residents to the holy city."

Another major reason for the downturn in business, Amouri tells Middle East Eye, is the Judaisation policies of the Israeli government. These include severe taxation and the issuance of unjust fines levied against Palestinians in the area in an effort to push them out of the Old City in favour of Jewish-Israeli settlers.

However, the arrival of the coronavirus remains the biggest blow dealt to the merchants.

With many customers no longer having enough money to shop, some traders, who are the breadwinners for their families, have had no choice but to shut down their businesses and work for Israeli companies.

“The occupation authorities used the coronavirus as a pretext to issue fines against people not wearing masks, and losses started to accumulate," said Amouri.

"Those who have not closed their shops yet are staying there out of ethical and religious commitments as a sign of solidarity in the city.”

The pandemic saw some merchants forced to lease out their shops for very low rents just to keep them open.

They themselves have been forced to take other jobs, such as working as cleaners in Israeli hospitals. Some have had no choice but to sell their wives' jewellery in order to feed their children.

Parallel to Khan al-Zeit is al-Wad street, where 10 commercial shops have closed down, despite the street being considered the main artery leading to the Al-Aqsa Mosque compound.

Wearing a mask, Abu Asaad stands at the entrance to his shop, gazing vacantly around the road - an area which used to be vibrant with residents, tourists and visitors. To his dismay, the street now lies almost empty.

“Since the discovery of the first coronavirus case in the country, the spending of Palestinians in East Jerusalem has dropped dramatically, sensing that the worse is still to come business-wise," Abu Asaad tells MEE.

"On the other hand, the Israeli government has increased its pressure against the merchants of the Old City of Jerusalem, as it aims to clear the city of its natives."

Abu Asaad had to close his shop for three months and move to the neighbourhood of al-Ram, selling watermelons on a cart. He returned to his shop a few weeks ago, but has no real revenue coming in.

"Our current presence in the al-Wad souk is for nationalistic reasons only. Business-wise, we can’t keep our shops open for even 10 minutes," he says.

Early in March, Jalal Abdeen and his brothers had to close their four souvenirs shops, reopening just to air them out.

They were taken aback by the amount of damage they found to the stock, caused by the high humidity in the bazaar.

Abdeen is aware that he will not be able to sell anything because he relies mainly on tourists, who have disappeared from the city since the start of the pandemic.

He still reminisces over the days when the market flourished during the years he was buying his goods from Syria. That country's collapse due to its civil war has only compounded the problems facing the souks in Jerusalem's Old City.

Abdeen, who is pessimistic about the short- and long-term future, now finds himself $3,000 in debt.

"The merchants were mistaken in making their merchandise totally dependent on foreign tourists, rather than connecting their commercial activity with the local population," says Mohammed Kirrish, a Jerusalem-based economic analyst.

"They had no choice but to close down their shops during the coronavirus pandemic, which caused severe damage to hundreds of Jerusalem's families.

"Khan Al-Zeit was one souk that addressed the needs of both the local people as well as tourists, and therefore has been saved from the threat of closure," Kirrish adds.

"The institutions and officials entrusted with following up on the economic situation in Jerusalem are responsible for the current situation in the markets of the Old City.

"This is due to their failure to avail the right guidance and funding needed to support the steadfastness of the Jerusalem's merchants."

Kirrish says that he and others had submitted tens of reports on the situation of the markets, outlining their bleak future unless necessary measures were taken and a sustainable plan put in place to promote the economy of Jerusalem.

"We designated the requirements of each sector and emphasised the importance of assisting the merchants who have to pay accrued taxes."

All of these measures require a profound change in policy, which does not seem imminent, says Kirrish.

As for the amount of damage done to the economy of the Old City, Kirrish says “it amounts to 60 percent up until now, and unless a long-term sustainable development programme is adopted, the figure will continue to rise”.

Discussing the decline in the Old City's fortunes, even before the coronavirus, Ziad al-Hamouri, head of the Jerusalem Centre for Social and Economic Rights, says: “Prior to the year 2015, 250 stores in the Old City of Jerusalem were closed.

"And towards the end of the same year, with the advent of the popular uprising in Jerusalem, the closing of al-Wad street and the installation of the electronic gates in the Old City, the closure rate increased, and reached 450 out of 1,300 commercial stores."

Turning to the latest crisis caused by the pandemic, Hamouri said some merchants had found themselves compelled to accept ration packages given to the needy in the city.

Others are not capable of opening their shops because they lack even the money for public transport or putting fuel in their cars, he adds.