A newborn at the department of pre-mature babies, al-Makassed Hospital (MEE/Aseel Jundi)
By
Aseel Jundi
in
Mount of Olives, occupied East Jerusalem

The corridors of what was once one of Jerusalem’s busiest Palestinian hospitals are hollow and the bed occupancy rate has dropped by 50 percent.

With a crippling financial crisis and the Covid-19 pandemic, the looming threat of closure inches closer by the day.

Since its establishment in 1968, the al-Makassed Islamic Charitable Society Hospital has worked hard to meet the medical needs of Palestinians hailing from the West Bank, Gaza and Jerusalem, becoming an integral part of the Palestinian health care system.

Over time, the facility has become the main hospital for transfer patients who prefer dealing with the Palestinian health ministry as opposed to the Israeli one, and who have complex health issues for which there is no specialised care in the West Bank and Gaza.

However, due to a myriad of factors, including Covid-19 related closures and a halt in security coordination between Israel and the Palestinian Authority (PA), patients from these areas who normally need an Israeli army-issued medical permit to access Jerusalem have been unable to reach the hospital.

Izz al-Din Hussein, the head of the hospital and the department of internal medicine and cardiology told Middle East Eye that the hospital’s debts amount to some 160 million shekels ($47m).

About 60 million shekels ($18m) of these debts are owed to the hospital by the Palestinian health ministry, which covers patient referrals from the West Bank and Gaza. The hospital also owes some $20m to medical supply companies, and about $9m in taxes, Israeli health insurance and bank loans.

Due to its nature as a charitable, non-profit facility, al-Makassed’s bills have accumulated over the years. For decades, the hospital has been treating large numbers of Palestinians free of charge, namely victims of Israeli attacks, as well as those whose Jerusalem IDs Israel has revoked or other marginalised communities in Jerusalem.

The PA’s coverage of patient referrals varies between 80-100 percent, while the hospital covers the remainder of the bill, including for those who are unable to pay for their treatment.

The recent financial crisis exacerbated by the coronavirus pandemic has resulted in the hospital’s inability to pay the salaries of its 1,000 employees, 75 percent of whom come from the West Bank, and some of whom are now unable to reach the hospital due to high transportation costs.

The head of the hospital, Izz al-Din Hussein, who left the United Kingdom in 1990 to serve his people back home, witnessed the hospital’s development from 40 beds in the beginning to today’s 270 - 88 of which are designated for intensive care.

He also witnessed the inauguration of several departments where complicated and qualitative surgeries are performed, particularly in the brain, nerves, bones, heart and chest.

So far, some 400 doctors from the West Bank completed their specialisations in internal medicine; pediatrics; gynaecology; obstetrics; general surgery; orthopaedics; cardiology; and brain and neurosurgery, in addition to diagnostic radiology and anaesthesia.

In the event that the hospital does not survive the threat of closure, all referral patients will find themselves forced to seek treatment in Israeli hospitals or outside the country - after decades of work that has seen al-Makassed succeed in offering high-quality Palestinian medical services.

The hospital director believes the world must stand by al-Makassed in its suffocating crisis to preserve its existence as a Palestinian institution in the heart of the capital, Jerusalem.

Due to the Israeli occupation, patients in the West Bank and Gaza are required to obtain medical permits to access Jerusalem's hospitals. Palestinian patients from these areas are sometimes able to see the city and visit the Al-Aqsa Mosque and Church of the Holy Sepulchre.

The threat of closure brings other concerns with it. The hospital is registered with the Federation of Israeli Associations and is subject to Israeli law due to Israel’s occupation and annexation of East Jerusalem in 1967.

“No Palestinian institution in Jerusalem that is shut down is reopened again. If the hospital is closed, its fate will be in the hands of Israel,” Hussein told MEE.

According to Hussein, Israel spares no effort in attempting to control the hospital and present itself as seeking to support it, even offering to pay the hospital’s debts owed by the Palestinian Authority directly from the PA’s tax funds which Israel collects on behalf of it.

But al-Makassed rejected, he said, explaining that it would not accept being part of the Israeli conspiracy against Jerusalem and the Palestinian people as a whole. The hospital on many occasions has also suffered from Israeli military raids of its premises, which involved the abduction of wounded Palestinian demonstrators and the bodies of those killed by Israeli forces, as well as the destruction of equipment and confiscation of documents, creating heavier burdens for the hospital and the psychological state and health of patients.

In one incident during a military raid, Palestinians were forced to frantically carry a dead body over the hospital walls and quickly bury him in a nearby cemetery to prevent his abduction by Israeli forces.

'The hospital of the poor'

The hospital’s managing director, Ahmed Jadallah, told MEE that the hospital, which was described as “the hospital of the poor” or the “Intifada hospital”, is now unable to provide treatment to the underprivileged due to the current crisis.

He says he has not witnessed such a complicated economic situation since he began working there 35 years ago.

Meanwhile, the rapporteur of the hospital staff union, Ahmed Ayyad, told MEE that prior to Eid al-Adha, the union launched steps in protest to demand the PA pay the debts it owes. But according to Ayyad, the latter responded that the bills were inaccurate and denied that the hospital had any unpaid balances at the Ministry of Finance. Despite these tensions, the ministry transferred four million shekels (one million dollars) to the hospital a few days before Eid al-Adha, an amount that was distributed among employees.

The hospital is also setting up a committee that will follow up with the PA’s finance ministry to audit the patients’ bills.

In the event that the PA fails to transfer the remaining money it owes to the hospital, Ayyad says that the union will not hesitate to escalate measures against the PA, aimed at preserving the survival of this medical edifice in the occupied capital, Jerusalem. 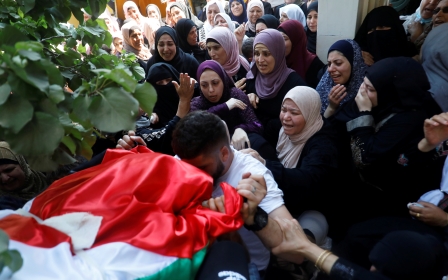