Coronavirus: Are US sanctions hurting Iran's response to the pandemic? 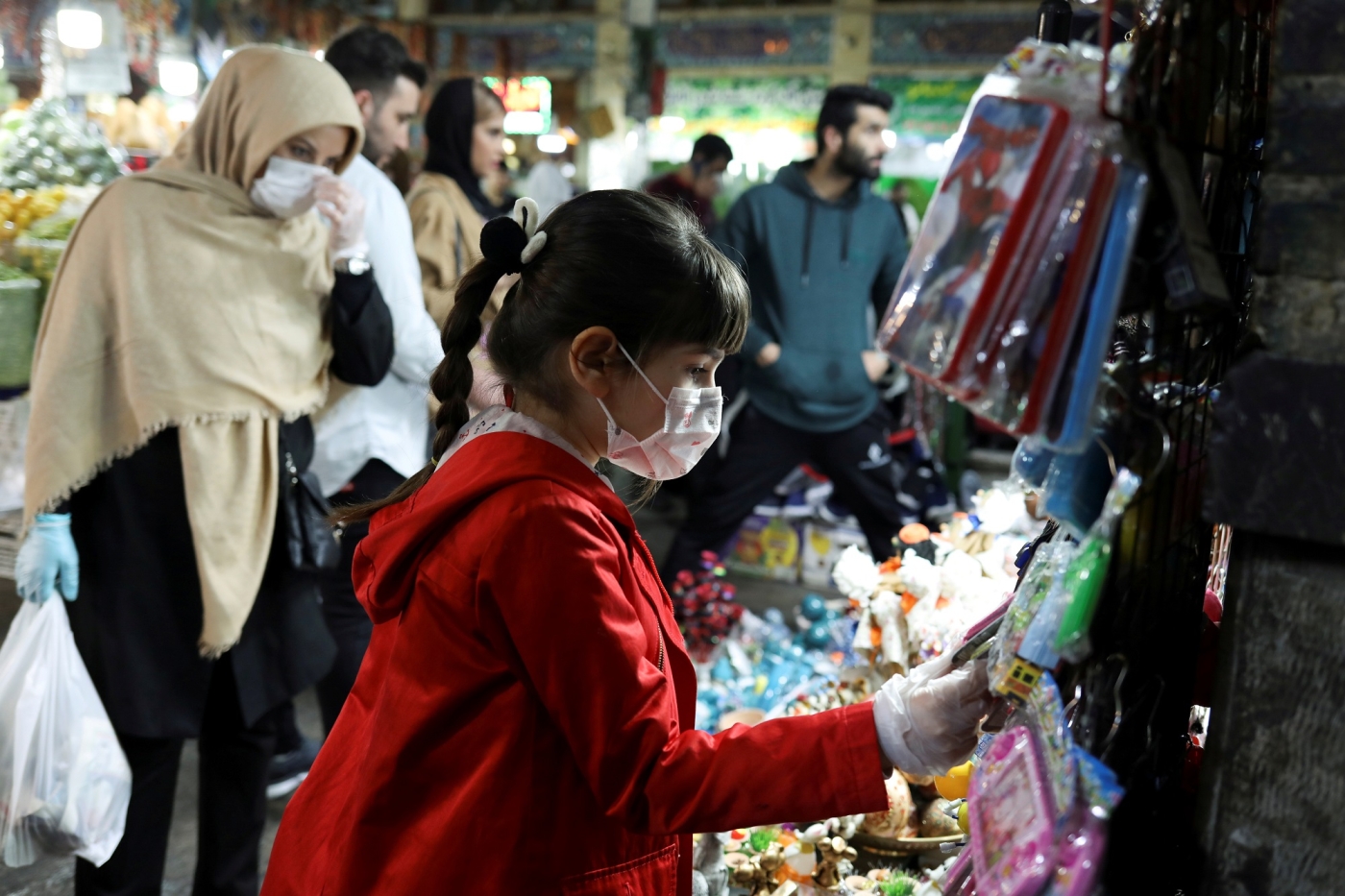 The coronavirus has killed more than 1,800 people in Iran, but the US is adamant on enforcing sanctions against the Islamic Republic (Reuters/File photo)
By
Ali Harb
in
Washington

Instead of easing sanctions against Iran, President Donald Trump imposed new ones.

Amid global calls for sanction relief for Iran - to allow Tehran to deal with the coronavirus and avert a humanitarian catastrophe - top US officials insist that Washington's "maximum pressure" campaign is not hindering Tehran's response to the pandemic.

The UK, China, Russia and Pakistan have all urged the White House to ease the sanctions. Key members of the US Congress have also raised the issue.

Still, the Trump administration maintains that its sanctions exclude medicine and humanitarian aid, and therefore do not affect Tehran's ability to contain the pandemic.

The stated goal of the sanctions is to choke the Iranian economy to the point where the Islamic Republic adheres to Washington's demands of ending its nuclear and ballistic missile programmes and ceases its support for regional militant groups.

Regime change advocates go even further; they hope that sanctions will lead to unrest that would ensure the total collapse of the Iranian government.

However, proponents of easing sanctions argue that Iran will not be able to effectively halt the spread of Covid-19 within and outside its borders if its economy is in free-fall.

"Sanctions have weakened the Iranian economy to such an extent that the country is really ill-prepared to deal with this crisis," said Barbara Slavin, director of the Future of Iran Initiative at the Atlantic Council.

"And the responsibility for that falls on the United States, which quit the Iran nuclear deal when Iran was in full compliance with it."

In May 2018, Trump nixed the multilateral agreement, known as the Joint Comprehensive Plan of Action (JCPOA), which saw Iran scale back its nuclear programme in exchange for lifting sanctions against its economy.

Since then, the US administration has been piling sanctions on various sectors of the Iranian economy, impeding the country's ability to export oil - a crucial source of revenues.

With the coronavirus spreading in and from Iran, rights organisations, US allies and advocacy groups are calling on Washington to suspend its sanctions to allow Tehran to contain the pandemic.

The Trump administration has remained adamant on enforcing its sanction regime.

Instead of lifting sanctions, Washington announced last week two sets of measures blacklisting companies that it accused of buying Iranian oil and petrochemicals.

The new sanctions came with a caveat - that Washington is not impeding humanitarian aid or access to medicine for Iranians.

"The Trump administration will continue to target and isolate those who support the Iranian regime and remains committed to facilitating humanitarian trade and assistance in support of the Iranian people," US Treasury Secretary Steven Mnuchin said in a statement last week.

US Secretary of State Mike Pompeo echoed that rationale, stressing that humanitarian aid is "wide open" for Iranians.

"We're doing everything we can to both facilitate the humanitarian assistance moving in and to make sure the financial transactions connected to that can take place as well," Pompeo said at a news conference on Friday.

Pompeo added that Washington offered humanitarian assistance to Iran, but it's not clear in what form or through what channel that offer was made. The State Department declined to comment when contacted by MEE.

'The virus doesn't stick to one nationality'

On Monday afternoon, the State Department sent a "factsheet" accusing the Iranian government of mismanaging the response to the virus and spreading false information about the effects of US sanctions. It also blasted media coverage of the crisis.

"The media should know better than to believe and propagate Chinese and Russian propaganda that misleads the public into believing US sanctions are to blame," the statement said.

After imposing blanket sanctions on Iran's central bank last September, Washington did allow humanitarian exemptions in February that would enable Tehran to buy food and medicine through a Swiss banking channel.

'The virus doesn't stick to one nationality. It spreads as more people contract it. It's a national security priority to try to contain it wherever it is'

But critics say aiming to destroy the Iranian economy is antithetical to wanting Iran to be able to confront Covid-19, which requires massive financial resources.

"I think the administration wants to have its cake and eat it here in that they want to collapse the entire Iranian economy and seek unrest while at the same time distancing themselves from the effects of those actions, including the stifling of humanitarian trade with Iran," said Ryan Costello, policy director at the National Iranian American Council (NIAC).

He added that much like Americans and others around the world, Iranians are struggling with the economic fallout of the virus, except they have to deal with the added pressure of sanctions.

The limited relaxing of US measures will not be enough, Costello explained, adding that even if Iran is able to stock up on medicine, it will not help much if people cannot afford it or take time off work.

"What we've been calling for is the easing of sanctions at large, so that the economy isn't under such strain," Costello told MEE.

Beyond China and Italy, Iran has emerged as a major epicentre of the coronavirus, with nearly 2,000 deaths and more than 25,000 cases of infected persons.

But coronavirus in Iran is not only a problem for Iranians. The outbreak in the Islamic Republic has spilled to Arab monarchies and global trade hubs across the Gulf where US troops are stationed.

"The virus doesn't stick to one nationality," Costello said. "It spreads as more people contract it. It's a national security priority to try to contain it wherever it is."

Slavin, of the Atlantic Council, also said that undermining the effort to stop Covid-19 in Iran would have ramifications beyond the Islamic Republic.

"It's wrong from a public health perspective. It's wrong if you want to contain the spread of the virus in the region, and it's inhumane," Slavin told MEE. Iran's Foreign Minister Mohammad Javad Zarif, who is himself under US sanctions, called on the international community on Monday to challenge Washington and its measures against Tehran to help fight the global efforts against the pandemic.

"US is NOT listening, impeding global fight against #COVID19. The ONLY remedy: DEFY U.S. mass punishment. MORAL & PRAGMATIC imperative," he wrote on Twitter.

For his part, President Hassan Rouhani accused US officials of lying about wanting to assist Iran combat Covid-19.

"If they want to help Iran, all they need to do is to lift sanctions," Rouhani said.

The country's supreme leader Ali Khamenei also lashed out against Washington, going as far as suggesting that the US may be culpable for creating the virus, which originated in China.

Iran is in such a crunch for cash that Tehran has turned for the first time in decades to the International Monetary Fund (IMF), seeking a $5bn loan to fight the novel virus.

Slavin said Washington has the ability to veto the request because Iran is on the State Department's list of "State Sponsors of Terrorism".

"If they block it, it's just going to be even more evidence that this administration completely lies when it says it cares about ordinary Iranians," Slavin told MEE. 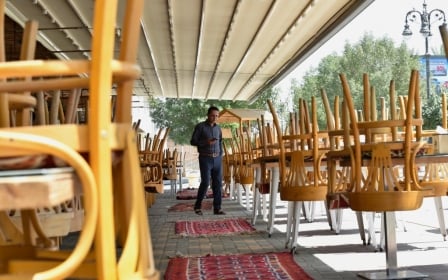