Mask-clad Iranians shop amid the Covid-19 pandemic, at the Tajrish Bazaar in Tehran on 17 March (AFP/File photo)
By
MEE staff

More than 40 grassroots organisations have called on US President Joe Biden's administration to lift restrictions that "have obstructed the flow" of critical medicine and humanitarian goods into Iran, amid the devastating toll of the Covid-19 pandemic.

The antiwar, human rights, and religious organisations, in an open letter on Wednesday, accused the administration of compounding "the suffering of people in Iran" through US sanctions.

'Covid-19 is a shared threat, and the US needs to treat it like one'

Iran has entered its fourth wave of the coronavirus pandemic, with the death toll surpassing 250 people a day. Experts have warned that the numbers will soon reach an average of 600 daily deaths.

Quoting Biden's statement made during his campaign for the presidency last year, the groups urged the US president to follow through on his own call. "In the midst of this deadly pandemic that respects no borders, the United States should take steps to offer what relief we can to those nations hardest hit by this virus - including Iran," he said at the time.

In the first days of his presidency, Biden announced that the administration would review how sanctions had inhibited humanitarian trade during the pandemic, but the White House has yet to release any conclusions of the probe.

"While the president has taken sorely needed steps to inoculate tens of millions and provide economic relief here at home, the administration's sanctions review is still ongoing," the groups in Wednesday's letter stated. One of the countries worst hit by the pandemic, at least 60,000 Iranians have been killed by the virus, while an investigation by BBC Persian has estimated the real toll may be twice or three times as high.

"Despite international calls for relief last year, the prior administration chose to escalate sanctions rather than ease them, helping to impoverish ordinary people in Iran in their hour of need," the groups warned. "President Biden must take a different approach."

"Now that he is in office, there are plenty of opportunities for the administration to deliver that relief. In addition to the president's own suggestions, the US should grant Iran access to its restricted assets abroad in order to purchase food and medical supplies," they continued.

MoveOn, CodePink, J Street, the American Friends Service Committee, the Women's March and the National Iranian American Council were among the 43 organisations to sign on to the letter.

"Covid-19 is a shared threat, and the US needs to treat it like one. By prioritizing humanitarian relief for Iran and other sanctioned states, President Biden can follow through on his campaign commitment and demonstrate that the US can be a force for global good," they said.

On Thursday, The Wall Street Journal reported the Biden administration had signalled it was open to easing sanctions "against critical elements of Iran's economy, including oil and finance" to help pave the way for ongoing nuclear negotiations.

Two people familiar with the matter told the newspaper the administration was open to lifting sanctions against Iran's central bank, its national oil and tanker companies and several key economic sectors including steel, aluminum and others. The lifting of such sanctions would drastically contribute to Iran's ability to recover from its economic crisis. 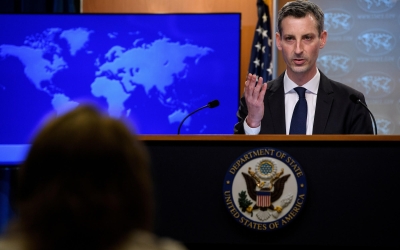 On Tuesday, Iran's President Hassan Rouhani said talks with the United States and other world powers were going well, with negotiations to revive the nuclear deal advancing to about "60, 70 percent" after the second round of negotiations in Vienna.

The US State Department agreed with the positive outlook, but stressed that reviving the nuclear accord was not yet imminent.

"The talks have been business-like; they have been positive. Yes, there has been some progress, but there remains a long road ahead," State Department spokesperson Ned Price told reporters.

"I think it's fair to say that we have more road ahead of us than we do in the rearview mirror."

The Washington delegation is set to return to the Austrian capital next week to resume the indirect negotiations. 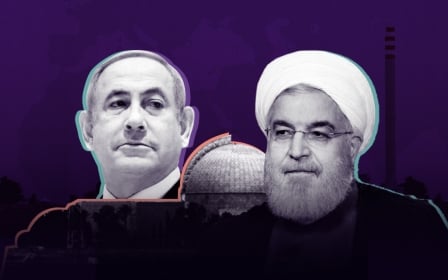 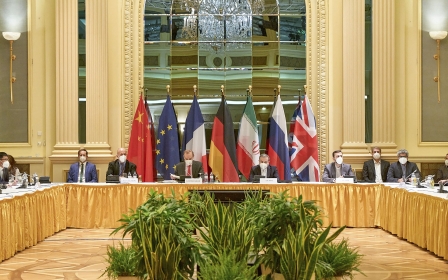