Meanwhile, Tehran indicates readiness for Qatar to play mediator role in nuclear talks, and, as the pandemic spreads, the number of Iranians working without a contract rises to seven million 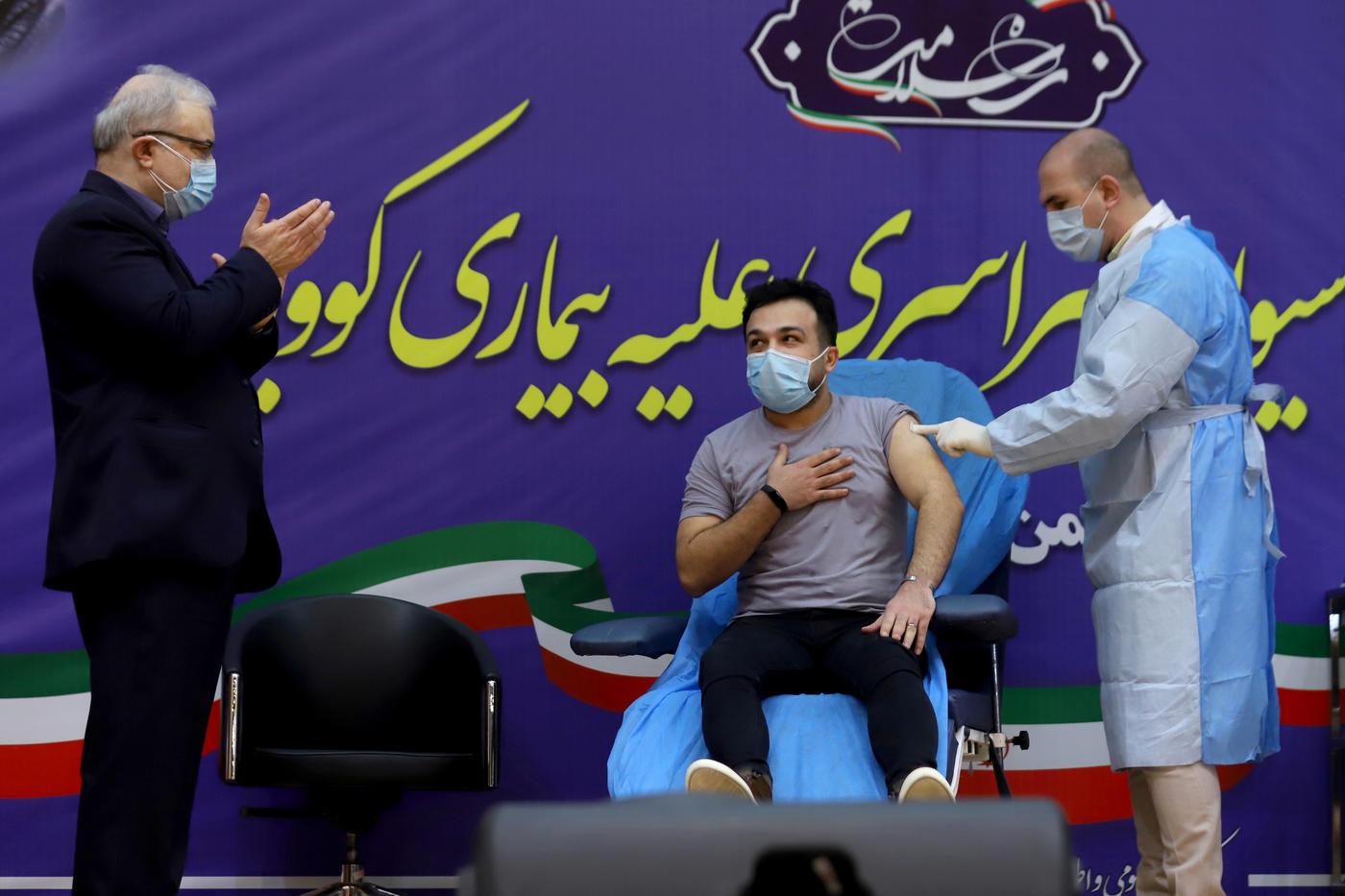 A member of the Imam Khomeini Hospital medical personnel receives a dose of Russia’s Sputnik V vaccine against Covid-19, in Tehran 9 February 2021 (Reuters)
By
MEE correspondent

Iranian authorities and health officials have claimed that in three months Iran would be the Middle East’s foremost manufacturer of coronavirus vaccine, but accounts on the ground paint a much grimmer picture.

Last Thursday, Tehran received its first batch of Sputnik V vaccine from Russia, and immediately began a mass vaccination campaign to contain the spread of Covid-19 in the worst outbreak of the virus in the Middle East.

However, in Tehran, independent health experts have warned that the number of imported jabs is not enough to vaccinate the country's 1.3 million healthcare workers. 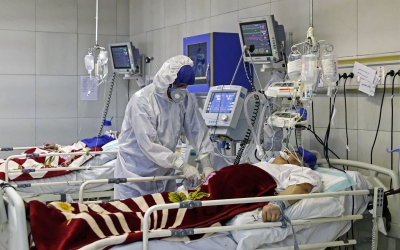 So far, Iran, with over 85 million people, has imported 600,000 doses of the vaccine, and the officials said that this number would rise to two million by the end of the current Iranian year on 20 March.

Meanwhile, Kazem Jalali, Iran's ambassador to Russia, said that Tehran and Moscow have agreed upon transferring the Covid-19 vaccine technology to Iran.

"Iran and Russia have reached an agreement to begin the joint effort to produce Covid-19 vaccines much sooner than anticipated," Jalali was quoted as saying by the Javan daily.

The head of Iran's Food and Drug Organisation, Mohammad Reza Shanehsaz, told the Javan daily that the country could produce 10 million doses of the Russian vaccine in a year.

"We expect that the process of manufacturing the vaccine in Iran would begin very fast and after meeting domestic demands we would become the region's main vaccine provider," he said.

Iran's health minister, Saeed Namaki, went even further, saying that in two or three months, Iran would export the vaccine not only to Middle Eastern countries but to the world, the Khorasan daily reported.

According to Khorasan, two homegrown vaccines, COV Barkat and COV Pars, have entered human trials, and 12 Iranian companies have submitted their request to manufacture the vaccine.

In mid-January, health officials announced that Iran was collaborating with Cuba to produce a vaccine. However, no further information about the Iranian-Cuban vaccine was released.

Meanwhile, disappointed with their government’s handling of the pandemic, Iranians took to social media to mock the news about Iran's attempts to become the Middle East's leading vaccine manufacturer.

"Forty-two years after the revolution, they [the government] are still importing the surgical suture, but now they want to produce Covid-19 vaccine for other countries," an Iranian social media user wrote on Twitter.

Iranian politicians have signalled their readiness to accept Qatar's role in mediating between Iran and the United States in talks to return to the 2015 nuclear deal, which would include the lifting of US sanctions in return for Iran limiting its programme.

The move came one week after French President Emmanuel Macron announced he was ready to act as a mediator between Tehran and Washington. Officials in Tehran have not responded to Macron's offer. Why Iran is determined to develop its missile programme
Read More »

In an opinion piece for the Iran daily, Sabah Zanganeh, an Iranian foreign policy analyst, wrote that Thani's visit to Tehran was not only limited to the Tehran-Washington negotiations, but also included discussions on the political stalemate in Lebanon and the ongoing civil war in Yemen.

"Doha would gain a high regional prestige if it succeeds in mediating [between the US and Iran]," Zanganeh wrote.

"That would be a task that the European Union did not manage to fulfil. Moreover, such a success would be a major blow to Saudi Arabia."

Meanwhile, the Javan daily, affiliated with Iran's Islamic Revolutionary Guard Corps (IRGC), wrote that despite Tehran's positive approach to a Qatari mediation role, Doha could not do much unless the US returned to the nuclear deal first.

"It is unlikely that in return for a drip-by-drip reduction of the US sanctions, Iran would change its policy about fully implementing the agreement," the Javan wrote, referring to Tehran's demand that the US returns to the deal first.

In recent weeks, the international community has raised concerns over Iran's decision to end "voluntary transparency measures", based on which the UN nuclear watchdog has access to its nuclear sites.

Iran said on Monday it will ban UN inspectors from accessing Iranian sites as of 21 February if the other parties to the deal do not uphold their commitments, based on a law Iran's parliament passed following the assassination of Iran's top nuclear scientist, Mohsen Fakhrizadeh, reportedly carried out by Israel.

Iran's minister of cooperatives, labour and social welfare, Mohammad Shariatmadari, has revealed that over seven million labourers work in the unofficial labour market, with no contracts, insurance, benefit or pension.

"The number of unofficial labourers has been on the rise [in recent years], and the pandemic has amplified the number of these workers employed without a contract," Mehr news agency quoted Shariatmadari as saying.

Informal workers are paid much less than the country's minimum monthly wage of 26m Iranian rials (about $110 on the open market).

According to Tofighi, the current minimum wage is hardly enough for the food budget for workers who have a family with three members.

Every year, Iranian workers' representatives negotiate with the Ministry of Cooperatives, Labour and Social Welfare over the minimum wage. However, the country's rocketing inflation has left millions of workers in a desperate situation.

Tofighi told Tasnim news agency that food prices have doubled since last year’s negotiations between the labourers and the government. Still, the minimum wage has remained unchanged during this time.

Meanwhile, the Ettemad daily wrote that about 1.5 million official workers have lost their job since the beginning of the pandemic in Iran in February 2020. 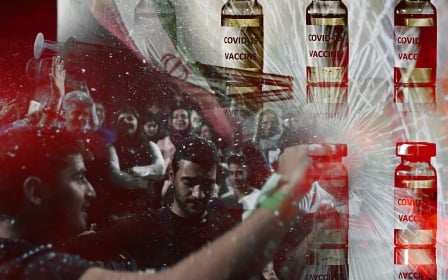