As Israelis tout record numbers of jabs, the occupied territories are still scrambling to obtain the coronavirus vaccine A Palestinian youth wearing a face mask rides his bicycle past a mural painting of a nurse injecting a vaccine to a COVID-19 virus in Gaza City, on 31 December 2020 (AFP)
By
Adam Khalil
in
Gaza City, besieged Gaza Strip

Israel has boasted that it is surpassing other nations with its vaccination campaign against the Covid-19 virus, with more than 12 percent of its population receiving the first of two jabs since December.

The country is seeking to be the first in the world to succeed in getting rid of Covid-19, paying a much higher price to gain priority access to the vaccine - as reports have indicated that Israel paid $62 per dose, while its cost in the United States does not exceed $20. Israeli Prime Minister Benjamin Netanyahu has touted the "achievement", attributing it to his privileged relationship with vaccine manufacturer Pfizer.

But the virus continues to claim high numbers of infections in the occupied West Bank and besieged Gaza Strip. As of Wednesday, the World Health Organisation (WHO) recorded a total of over 162,000 cases in the occupied territories, including 1,663 deaths.

Israel has been criticised by human rights organisations for shirking its responsibilities as an occupying power - as defined under international law - by not only failing to deliver vaccines to the five million Palestinians living in the occupied territories, but also ignoring the risks to the lives of Palestinian prisoners.

For Palestinians, the much advertised “success” of Israel’s vaccination campaign has become another stinging reminder of the vast gap between Israelis and Palestinians under occupation.

Struggling to get a hold of the vaccine

Nader Abu Sharkh, a Gaza history teacher, had initially underestimated the severity of the pandemic, until his 60-year-old mother was diagnosed with Covid-19 a month ago.

Since then, Abu Sharkh has been closely following the development of vaccines around the world, and "the odds of it reaching us Palestinians".

"Israel is proud of vaccinating its citizens, and we are overwhelmed by our worries and division," he told Middle East Eye. "The countries of the world and Israel clearly announce vaccinations, vaccination rates, and everything related to ways to confront the virus, but poor us, we do not know anything."

Palestinian Authority (PA) Minister of Health Mai Kaileh announced a few days ago to Voice of Palestine radio that she had signed a contract with a vaccine manufacturer, but that it was awaiting approval by the government.

Kaileh said she expected that the vaccine would be available before February, and that priority would be given to medical staff, especially those working in intensive care units, laboratories and coronavirus triage centres.

But a source in the Ministry of Health has stated that the company the PA contracted around two million doses of vaccine from had not yet been approved by the WHO, leading the source to rule out its deployment by the date set by the minister.

The PA had initially bet on buying the Russian jab, but Moscow has bowed out of selling the vaccine abroad, saying it lacks sufficient quantities for exportation.

The head of the WHO office in Gaza, Abdel Nasser Subuh, told MEE that the first doses to reach the Palestinian territories would likely come through his organisation’s Covax programme, which provides vaccines for areas that cannot afford them.

The Covax programme is due to start after mid-February, with no specific timeline for it to be distributed in the occupied territories.

While Subuh said priority would be given to the elderly and those suffering from chronic diseases, people over the age of 65 are estimated to amount to only around 3 percent of Palestinians in Gaza and the West Bank. This has led some to fear that only small batches of vaccines will be sent.

Legal obligations of an occupying power

The gap in vaccinations between Israel and the occupied territories has once again sparked criticism.

“While Israel celebrates a record-setting vaccination drive, millions of Palestinians living under Israeli control in the West Bank and the Gaza Strip will receive no vaccine or have to wait much longer - there could hardly be a better illustration of how Israeli lives are valued above Palestinian ones.”

Israeli news outlets have rejected accusations that the country is engaging in “medical apartheid”, saying such criticism amounts to antisemitism, and claiming that with the PA not officially requesting assistance to obtain the vaccine, Israel bears no responsibility for providing medical support to Palestinians under the 1993 Oslo Accords that led to the creation of the PA.

But the Fourth Geneva Convention states that occupying powers have a responsibility to maintain “medical and hospital establishments and services, public health and hygiene in the occupied territory, with particular reference to the adoption and application of the prophylactic and preventive measures necessary to combat the spread of contagious diseases and epidemics".

While Israel often points to the existence of the PA as freeing it of its obligations to provide for Palestinians in the occupied territories, in effect the Palestinian administration has very limited authority in only some areas of the West Bank, and remains dependent on coordination with Israel for many of its most basic functions.

But several Palestinian and Israeli human rights organisations - including the Al Mezan Centre for Human Rights, Adalah, and Gisha - have countered that that Israel cannot evade its responsibilities as defined by the Geneva Conventions.

"Israel is obligated as an occupying power under international law to provide Palestinians with vaccine doses of the same quality that it gives to its citizens," Al Mezan's deputy director Samir Zaqout told MEE.

The fate of Palestinians detained by Israel has been a particular source of concern as cases have risen, while Israeli media reported last month that Israel's public security minister Amir Ohana told the country's prison service not to inoculate Palestinian prisoners. On 24 December, Ohana instructed to begin providing vaccinations to workers in the prison service - but not to prisoners themselves.

"There is a state of fear and anxiety for the lives of prisoners, in light of the rapid spread of coronavirus inside prisons," Ahmed al-Mudallal, a spokesman for the Palestinian Prisoners Committee, told MEE. "This spread comes as a result of the lack of preventive means and treatment supplies, in addition to preventing the entry of doctors and specialists, and not allowing vaccination inside the prisons."

According to the Palestinian Prisoners' Society (PPS), the number of incarcerated Palestinians infected with coronavirus in Israeli prisons is around 200, among an estimated 4,400 Palestinians currently detained.

Zaqout accused Israel of practicing "racial discrimination" against the Palestinians - with Gaza being particularly vulnerable.

"Israel's responsibility is growing in Gaza in particular, as it has been subjected to a stifling blockade for 14 years,” Zaqout told MEE. “This imposes on Israel obligations under international and Israeli law, and it bears responsibility for preserving the health and safety of two million Palestinians."

Medical facilities in the Palestinian enclave were already severely strained prior to the pandemic, and the outbreak of the virus has only worsened the situation. Although the virus hit Gaza late, it spread widely in late August.

The Hamas movement, which has been ruling in Gaza since 2007, is dependent on decisions taken by the West Bank-based PA in order to receive the vaccine. Meanwhile, all goods entering Gaza through crossings on the Israeli side require Israeli approval.

The deputy director of primary care for Gaza’s health ministry, Majdi Duhair, said that there was coordination with the PA and the WHO, stressing to Gaza-based Al-Quds radio that officials in Gaza were working with several parties to accelerate the arrival of the vaccine in the enclave by February.

Zaqout told MEE that the restrictions imposed by Israel on Gaza “affect the health system and infrastructure, with medical equipment and spare parts for medical devices classified among the items that Israel defines as being dual-use, hence preventing their entry into the besieged Gaza Strip”.

Amid such a dire preexisting context prior to the global pandemic, rights groups continue to call on Israel to act.

“Over half a century of occupation and enforcement of a system of institutionalised discrimination in the (occupied Palestinian territories), including East Jerusalem, Israel has deprived Palestinians of their basic rights and committed mass human rights violations,” Amnesty International wrote on Wednesday.

“The Covid-19 pandemic and lack of fair access to vaccines have only magnified the discrimination and inequality faced by the Palestinian population.” 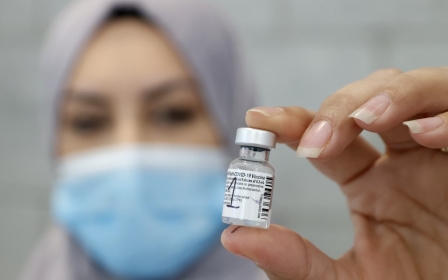