Delusional, misinformed and creepy: A night out with Trump supporters

Thousands gathered to see Trump in New Jersey, but few could explain why he was so great 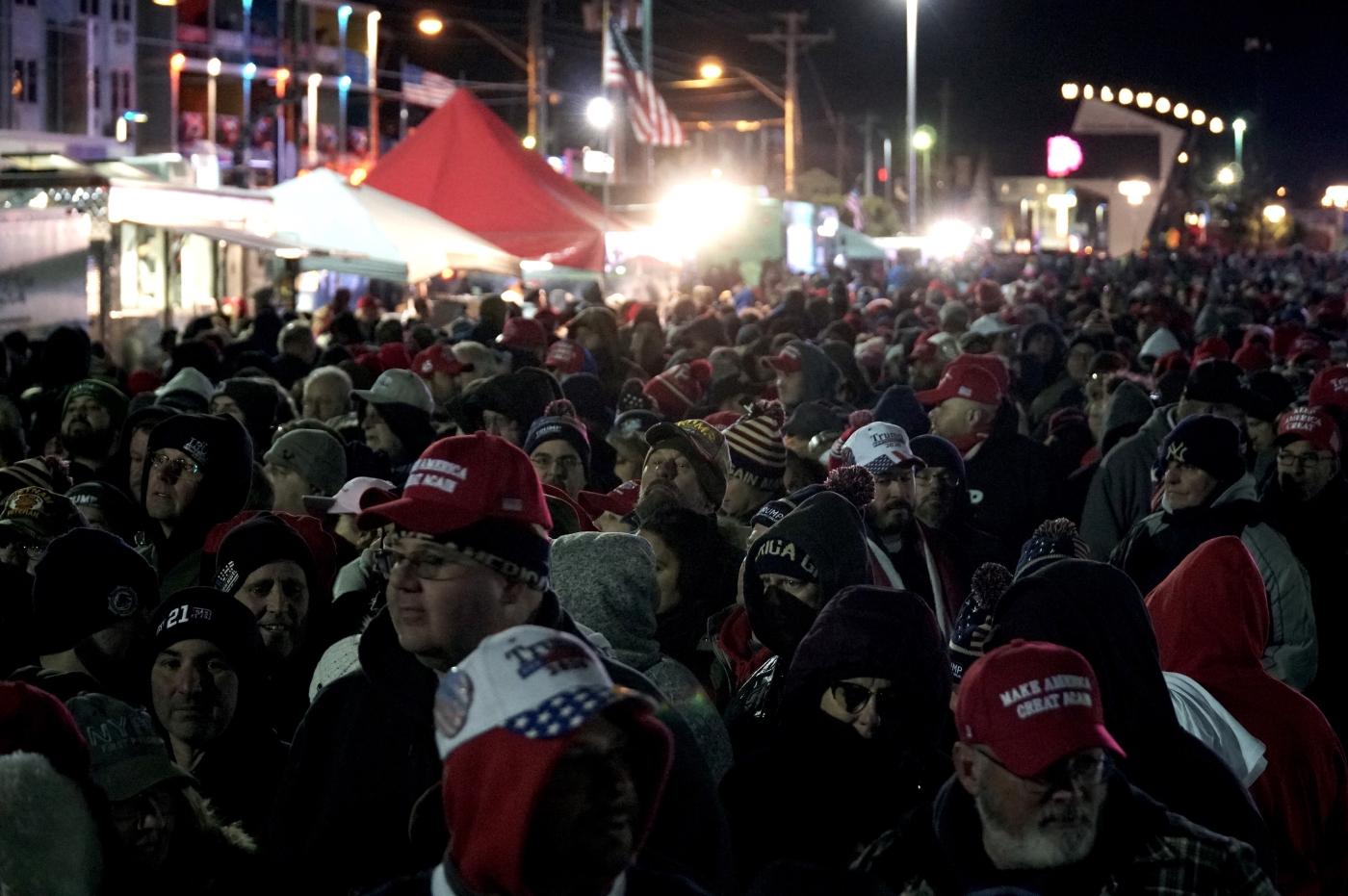 Wildwood is a ghost town in the winter.

As one of several resort towns that make up the southern New Jersey coast, Wildwood is quiet, and dead between December-February. Hotels, resorts, even bars shut down as the bitter winter takes over the Garden State.

But over the past few days, this town of little more than 5,000 inhabitants arose from its slumber as thousands of Trump supporters arrived for the US President's "Keep America Great" election rally on Tuesday night.

'I know he [Trump] is an asshole... but that's okay. He is a businessman, he gets things done'

According to residents, some shops opened up just to handle the incoming armada of Trump supporters from across the state of New Jersey and neighbouring Pennsylvania.

"I came at 6:20am this morning," one man told Middle East Eye. "I still didn't get in; I missed out only by a couple hundred yards," he added.

On Tuesday night, Trump repeated the same array of achievements under his presidency. He flaunted the strength of the stock exchange, the killing of Abu Bakr al-Baghdadi and the dismantling of the Islamic State group, and the assassination of Qassim Soleimani.

He castigated the opposition party and made a mockery of the media. Inside the stadium, a reported 7,400 supporters chanted "Four more years" and "USA, USA."

Trump said that more than 100,000 people had registered for the rally, a number no one has been able to verify, and that "tens of thousands" were outside trying to get in.

There were around 1000 standing or seated on deck chairs wrapped in blankets by the time his address started on the big screen, with others headed for the nearest diner or bar to escape the chill. NJ.com reported that several thousand were watching it on a large screen at a separate park.

Prior to Trump's address, the scene outside the convention centre had the feel of a carnival.

Food trucks sold overpriced hotdogs, fries and cupcakes. Other proprietors gave out free donuts and coffee to strangers in the spirit of the moment. Two men with fake tans and orange hair walked around and performed impersonations.

In the areas closed off to vehicles, officials belonging to local law enforcement including dozens of Secret Service agents and riot police paced the vicinity.

Mark Keith from South Carolina told MEE that he had traveled to 38 states selling merchandise. He said this rally wasn't much of a success because there were too many vendors around.

"I like him and support him, because what you see is what you get. He is honest.

"Look, I know he is an asshole, too, but that's okay. He is a businessman, he gets things done." Keith, one of the few African-Americans at the event venue, said.

Making excuses for the president is a recurrent theme here. Trump is only trying to get things done; he is under attack from the establishment because he exposes their corrupt ways.

His temperament, dangerous decision making, hateful policies towards immigrants or Muslims or problematic plans in the Middle East are of little consequence to those here. They are necessary for the redeeming of the American dream. Nothing is personal. For his part, Trump sticks to the key messaging: family values and the economy.

His purported protection of their fundamentals makes him their protector. His victimhood is theirs. His denials are theirs, too.

One man, commenting to another holding a Trump flag, complained about the ongoing impeachment trial against the president.

"This morning, this waitress at the motel asked me how I could ignore the impeachment trial.

"I asked her: "What impeachment? There is no such thing. I suppose you believe in flu shots, too," he said to a chuckle from the accompanying stranger.

"The key is to not watch the news or read the papers," he added.

Resentment towards the media remains a huge theme among Trump supporters. And so, too, are alternate facts and serial allusions to violence.

Throughout the evening, a man named Larry carried a poster of a dartboard and a bag full of T-shirts with the names of the major mainstream media as targets. Though Larry insisted his T-shirts were made in the US, the label said "Made in Pakistan".

"This is not calling for real violence against the media," he said to a question from MEE.

"It's more like inflicting a mental violence," he tried to explain, before adding: "Here, take my card, I am also a lawyer. I can help if you're facing deportation or something."

As the long line snaked on, with no obvious end in sight, a brawl broke out. But it was not in connection with any protest. "This man pushed my mother," a man said before mediators intervened to calm the rift. It was one of a number of brief punch-ups as the crowd grew impatient and tired. There was garbage strewn all over the area; the portable toilet cabins were overflowing with rubbish thrown in them over 48 hours.

In the background, Queen's We Will Rock You and Gnarls Barkley's Crazy played on repeat between announcements over the convention's PA system.

Announcements were routinely made about the prospects of anti-Trump protests at the venue, urging people to let the police handle them. but there were few protesters present. Three people called for environmental justice and for "making America green again." They bothered no one.

Despite a perception that Trump supporters are mostly old and white, the rally had a sizable number of young people, who said that although they came on account of their parents’ support for Trump, they, too, also felt a kinship with his vision for the nation. "This is Trump country," was an often-heard slogan throughout the night.

Sixteen-year-old Antonia from northern New Jersey told MEE that she had done her "own research before coming here".

"Drudgereport," she said referring to the conservative news aggregator.

"But I try to read all sides before making a decision. I like what he brings to the table," she said without elaborating.

On Trump's misogyny or his historical lecherous behaviour, Antonia said she saw him as the president, not as some personality she had to like. Another 14-year-old asked his mother to take a photo of him holding a Trump flag. "I am warning you, do not post it on social media," the mother said.

Antonia explained that it was not easy to talk positively about Trump at school, reinforcing the perception that Trump promotes about himself as a martyr raging against the machine.

"The teachers are always criticising him. It's like a more liberal space," she said.

This is Wildwood, NJ after thousands of MAGAs spent the evening at Trump’s rally😳

This is love of country? Smh

Likewise, Brett Piper, who drove close to two hours to get to Wildwood, he said that he had come to the rally because he saw the event "as a once in a lifetime opportunity".

The 18-year-old told MEE that the anti-Trump brigade "were trying to narrow people's thoughts and ideas," in reference to conservative arguments that Democrats are undermining free speech because of political correctness.

"Once I complete school, l will join the military and hopefully into an elite police force someday. My entire family is part of the military. I want to protect and serve my country," he added.

Trump spoke for a full hour, enthralling supporters with his trademark attacks on the media, and the Democrats.

Outside, the crowd began to disperse, leaving others to begin the long and arduous clean-up operation. 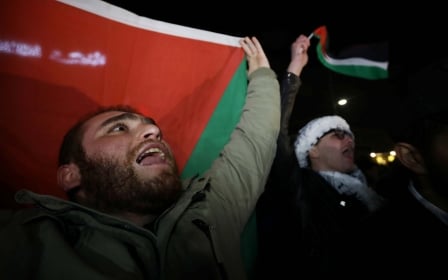 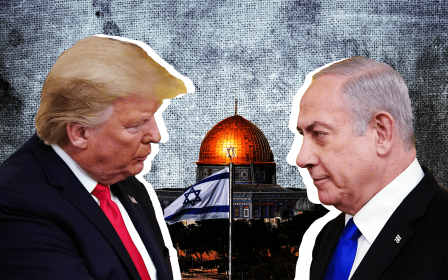 Occupation
What is Trump's plan for the Middle East?