In a national address on Wednesday after returning from Riyadh, Khan said Pakistan was in a "better position" because of Saudi help.

Pakistan announced on Tuesday it would receive $3bn in foreign currency support from Saudi Arabia and another $3bn in loans.

"We were facing really hard times. We were highly pressurised into paying heavy debts. But thanks to Saudi Arabia’s extension of assistance, we are out of the pressure," Khan said.

Saudi Arabia's high-profile Future Investment Initiative - nicknamed "Davos in the Desert" - saw partners and international allies withdraw after it emerged that Khashoggi, who had been critical of Saudi Crown Prince Mohammed bin Salman, was killed inside the Saudi embassy in Istanbul on 2 October.

Khan has condemned the murder but told MEE before the conference he could not afford to skip the event because of the record debt Pakistan was buried under.

"We’re desperate at the moment," he said in an interview in Islamabad.

“The reason I feel I have to avail myself of this opportunity [to speak to the Saudi leadership] is because in a country of 210 million people right now we have the worst debt crisis in our history," he said.

A Pakistan finance ministry spokesman confirmed to Reuters that Pakistan would also be seeking a loan from the International Monetary Fund, despite the funding from Saudi Arabia.

Finance ministry spokesman Noor Ahmed said the loans will strengthen Pakistan's negotiating hand in talks with the IMF, which is likely to push Pakistan to implement painful structural reforms linked to the currency, the energy sector and other areas where Pakistan's global competitiveness has lagged. 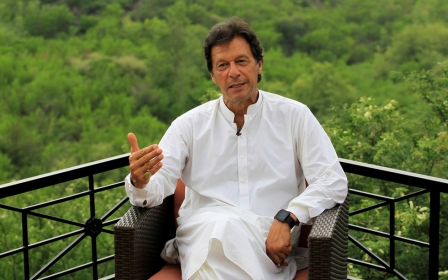