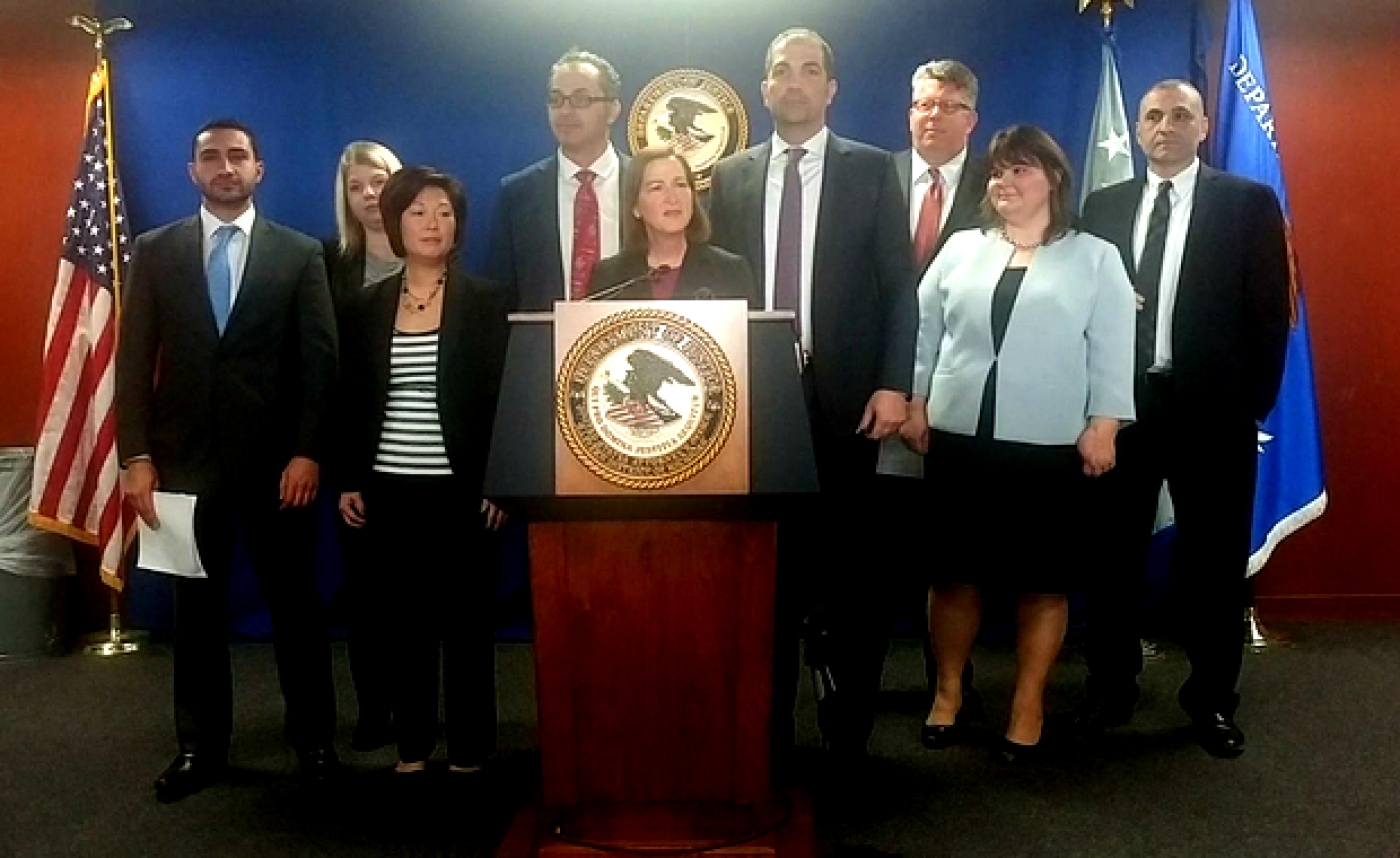 Barbara McQuade, US attorney for Eastern District of Michigan, said she is 'proud' of settlement (MEE/ Ali Harb)
By
Ali Harb

The mayor of a Detroit suburb was called a terrorist on Tuesday for saying that a proposed mosque in the city will not cause traffic problems in a row that has seen anti-Muslim protests led by Christians who fled violence in Iraq.

Islamophobia raged at a city council meeting in Sterling Heights that approved a legal settlement resolving a civil lawsuit and a Department of Justice complaint against the city’s planning commission for denying a mosque proposal in 2015.

"Oh no, the First Amendment doesn't apply to political ideologies... if there's a religious aspect of Islam, it's a religion of hatred."

Although demonstrators had residential grievances, including parking and noise, anti-Muslim bias was conspicuous as opponents of the mosque referred to Muslims as killers, terrorists and freeloaders.

The American Islamic Community Center (AICC) sued the city last year, alleging that the mosque project met all legal requirements. The Department of Justice followed with its own lawsuit, accusing Sterling Heights of violating Religious Land Use and Institutionalized Persons Act of 2000 (RLUIPA).

Sterling Heights is a northern Detroit suburb with a population of more than 130,000. It is home to a large concentration of Chaldeans, an ethno-religious Catholic community native to northern Iraq, where Christian churches and villages have been targeted by the Islamic State (IS) group and other militants since the 2003 US-led invasion.

Both lawsuits compared the proposed size of the mosque with other houses of worship in the city and cited Islamophobic statements by protesters and a member of the planning commission.

Sterling Heights agreed to settle the cases, allowing the mosque to be built at its originally proposed size, but with the height of its minarets slightly scaled down. The AICC will be compensated at least $350,000, with an additional confidential amount negotiated between the Muslim group and the city’s insurance company.

On Tuesday night, more than 200 people flocked to the Sterling Heights city hall to urge officials not to ratify the settlement. There was an orchestrated media blackout among anti-mosque protesters before the hearing began.

A man stood outside the building asking protesters in Arabic and English not to speak to news outlets.

Janice Daniels, the former mayor of neighbouring Troy, a city of more than 80,000 people, scolded the Sterling Heights city council for spending money on playground equipment but lacking the funds to push back against Islam, whose ideology, she said, is "death to America".

Michael Taylor, mayor of Sterling Heights, cut off Daniels for being out of order. She was one of many speakers interrupted by the mayor for bashing Muslims rather than addressing the mosque settlement. But in spite of the mayor's efforts, residents kept circling back to criticism of Islam itself.

Daniels told Middle East Eye that Muslims should not be guaranteed religious freedoms under the US Constitution.

"Oh no, the First Amendment doesn't apply to political ideologies," she said. "This is hardly - if there's a religious aspect of Islam, it's a religion of hatred."

The former Troy mayor’s blatant bigotry was representative of most of the crowd.

The Donald Trump administration was an almost constant theme among anti-Muslim protesters who argued that the new Justice Department, headed by right-wing Attorney General Jeff Sessions, may withdraw its support for the case.

An Iraqi immigrant told the council that Muslims want to destroy the American Constitution. Another speaker, also from Iraq, claimed to have discovered ties between the AICC and terrorist groups.

The hearing was halted several times, as Taylor was faced with boos for censoring Islamophobic comments.

"You work with these terrorists. You are one of them," a member of the audience yelled at Taylor at one point, although the mayor originally opposed the mosque.

"You work with these terrorists. You are one of them," a member of the audience yelled at Mayor Taylor at one point

Nahren Anweya, a resident, said building the mosque would be insensitive to Iraqi Christians who are undergoing a "genocide" at the hands of Muslims in Iraq.

Attendees were overheard alleging that city officials were bribed by Saudi Arabia and Iran to accept the settlement.

"We voted him in, we'll vote his ass out," one Christian Iraqi-American resident said of the mayor after he called a recess. "I want to know how much Saudi Arabia paid for that lawyer." Another protester, referring to the city's attorney, asked who negotiated the settlement. Others vowed to sell their homes and leave the city if the mosque is built.

Anne McClorey McLaughlin, the lawyer who represented Sterling Heights in the lawsuit, had urged the council to approve the legal agreement, arguing that the costs would be much greater if the case went to trial - and the mosque would be built anyway.

The mayor eventually moved to evacuate the meeting chamber of residents after repeated outbursts during his conciliatory remarks, when he said that Muslims are a part of the Sterling Heights community. The council unanimously approved the settlement.

Taylor argued that the planning commission made the right decision in 2015, and if the accommodations stipulated by the lawsuit had been included in the original mosque proposal, the building would have been approved.

However, AICC attorney Mohammed Abdrabboh dismissed Taylor’s argument that amendments to the mosque's plan would have earned the approval of the planning commission.

"The planning commission’s decision to deny the mosque is 110 percent because it’s a house of worship for Muslims."

He said the Muslim group was in constant communication with the commission in the 11 months between the time the mosque was denied and the lawsuit was filed, to no avail.

The settlement does not include an admission of guilt by the city. But Abdrabboh says his argument about discrimination still stands.

"The planning commission’s decision to deny the mosque is 110 percent because it’s a house of worship for Muslims," he told MEE. "I give no room for any other reason."

Barbara McQuade, the top federal prosecutor in the Detroit area, said she is satisfied with the settlement. The Sterling Heights agreement follows a settlement with Pittsfield Township, which was sued by McQuade’s office for rejecting the building of an Islamic school.

She said the two cases demonstrate the power of the law in correcting wrongdoings.

"I grew up in Sterling Heights and I am very proud to announce this settlement," McQuade, flanked by the AICC lawyers, said at a news conference on Wednesday. "Inclusion cannot mean that some groups are welcome and others are not."

Azzam Elder, who was on the AICC’s legal team, said Sterling Heights’ Muslim community is "relieved" by the settlement.

"They feel really good; they feel victorious," he told reporters. Still, Elder said the public display of bigotry at the city council meeting on Tuesday was cause for concern.

But McQuade played down the hateful comments, saying they are not reflective of all Sterling Heights residents.

One reporter asked why the Muslim group would not move the house of worship to a different location, since the community was publicly rejecting the Mosque.

"Why not leave? Because America says you get to be where you want to be," McQuade said. "If you own land, you don’t have to leave because your neighbors don’t want you there."

Elder said many AICC members have been in Sterling Heights a lot longer than those who were "spewing venom" at the city council meeting on Tuesday night.