'Do you only care how we die?' Syrians ask why gas is the only red line

Khan Sheikhun has been bombed, burned, and now gassed. Locals ask why Assad has been free to kill for so long 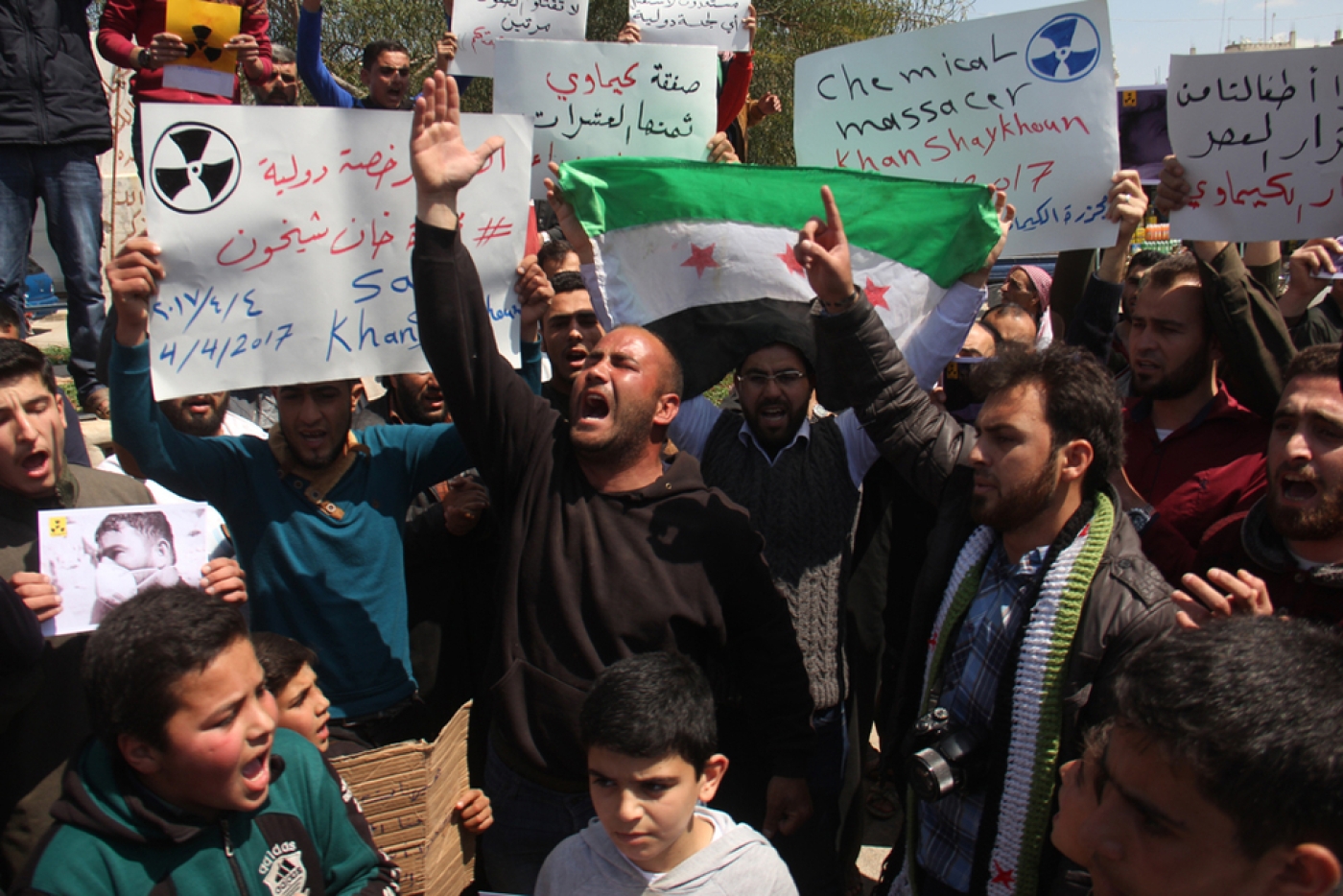 KHAN ShEIKHUN, Syria - As US cruise missiles struck a Syrian airbase in Homs on Friday, the government was going about its usual, deadly business: Syrian or Russian bombs were at the same time falling on the Idlib suburb of Baldat Heesh, destroying several homes, killing eight people including three children, and injuring 10 others.

Baldat Heesh is a short distance from Khan Sheikhun, where more than 70 people were killed in a chemical attack on Tuesday. And while the focus remains on that attack, and the US response, the people of Idlib cower in their homes as barrel bombs continue to fall.

In the end, the result for us is the same. We die. We continue to die

Many spoken to by Middle East Eye were frustrated it took a chemical attack to force the hand of the US: gas, bombs, starvation, sieges - they all have the same result in Syria.

And such is the twisted reality after six years of war, some rationalise and decide they would rather be gassed to death than eviscerated by high explosives.

Um Ahmad, a mother from Khan Sheikhun whose three-year-old nephew was gassed to death, told MEE: "The world is shocked by the chemical attack and yet they do not understand.

"To us who have lived through six years of siege, forced starvation and incessant attacks by both Russia and the Syrian regime, this is simply another other way to die, no more and no less," she said.

"It does not matter that it is forbidden internationally or how it kills, in the end, the result is the same. We die. And we continue to die. Do you only care how we die or that we are dying?

And in a chilling reflection on the reality of war, Ahmad said: "We prefer death this way. We can bury our children in one piece and not have to search for their parts among the rubble and shrapnel."

'How many more ways to die?'

Moaz al-Shami, a citizen journalist, echoed Ahmad's feelings in the the aftermath of the Khan Sheikhun attack: "Why has the world abandoned us and doesn't even look at us?" he said in a broadcast.

"There is no type of death that we have not experienced! Death by chemical weapons, death by drowning, death by phosphorous, death by rockets, death by air strikes, buried under rubble, death by suffocation.

"Please answer me, what type of death have we not tasted yet? How many more ways to die are still left for us to face?"

Mahmoud Othman, also of Khan Sheikhun, told MEE: "There are crimes you can see and other war crimes we face that are invisible to the eye.

"Both my brothers have been imprisoned by the government since 2013, we were told they died under torture, others say they may still be alive, we don't know.

"The world cannot see them but we know that this government is killing us in more ways than the world can see."

Othman said the US strike in Homs gave the Syrian president, Bashar al-Assad, a red line, but it did not deter him from killing by other means.

"The US strike only provides a red line to the Assad regime to not use chemical weapons.

"The message to us is that the US wants the Assad government to continue to kill us just not with forbidden weapons."

Civil defence volunteers were among the first to arrive after the chemical attack in Khan Sheikhun. They have seen much in the years of war, but nothing as profoundly shocking.

Hamid Kutini, a White Helmets volunteer in the town, recalled the horror he witnessed on that day.

"The first rescue team to arrive at the scene called and told us that they were starting to lose consciousness - they asked for back-up, but warned us to be careful as we may be affected by the gas.

"When I arrived people were everywhere, many had lost consciousness, many were foaming at the mouth. It was terrifying - you could see the souls leaving the people's bodies.

"My mind could no longer tolerate it. I started to feel the gas had affected me and I was afraid it would make me lose consciousness too."

Kutini put the numbers of dead and poisoned in the hundreds.

"We treated 300. The children and the elderly were harder to save, their bodies were weaker and could not tolerate it."

"As I began to take the children's bodies inside our office was targeted by about 10 air strikes.

"I cannot describe to you the second attack because what I had seen earlier turned my mind blank.

Local sources told MEE that Khan Sheikhun was still facing air strikes and that many of the locals have fled the area fearing another chemical attack.

"This was the worst attack I have experienced because it took the largest number of lives.

"But this time we didn't have to search for the scattered parts of the victims bodies among the shrapnel and rubble as we do with barrel bombs.

"No one has ever tried to stop the holocaust inflicted on us."