Egypt and the IMF: Success or failure?

As the IMF's last loan payment is made, economists say the three-year programme has benefited investors, but many Egyptians are worse off 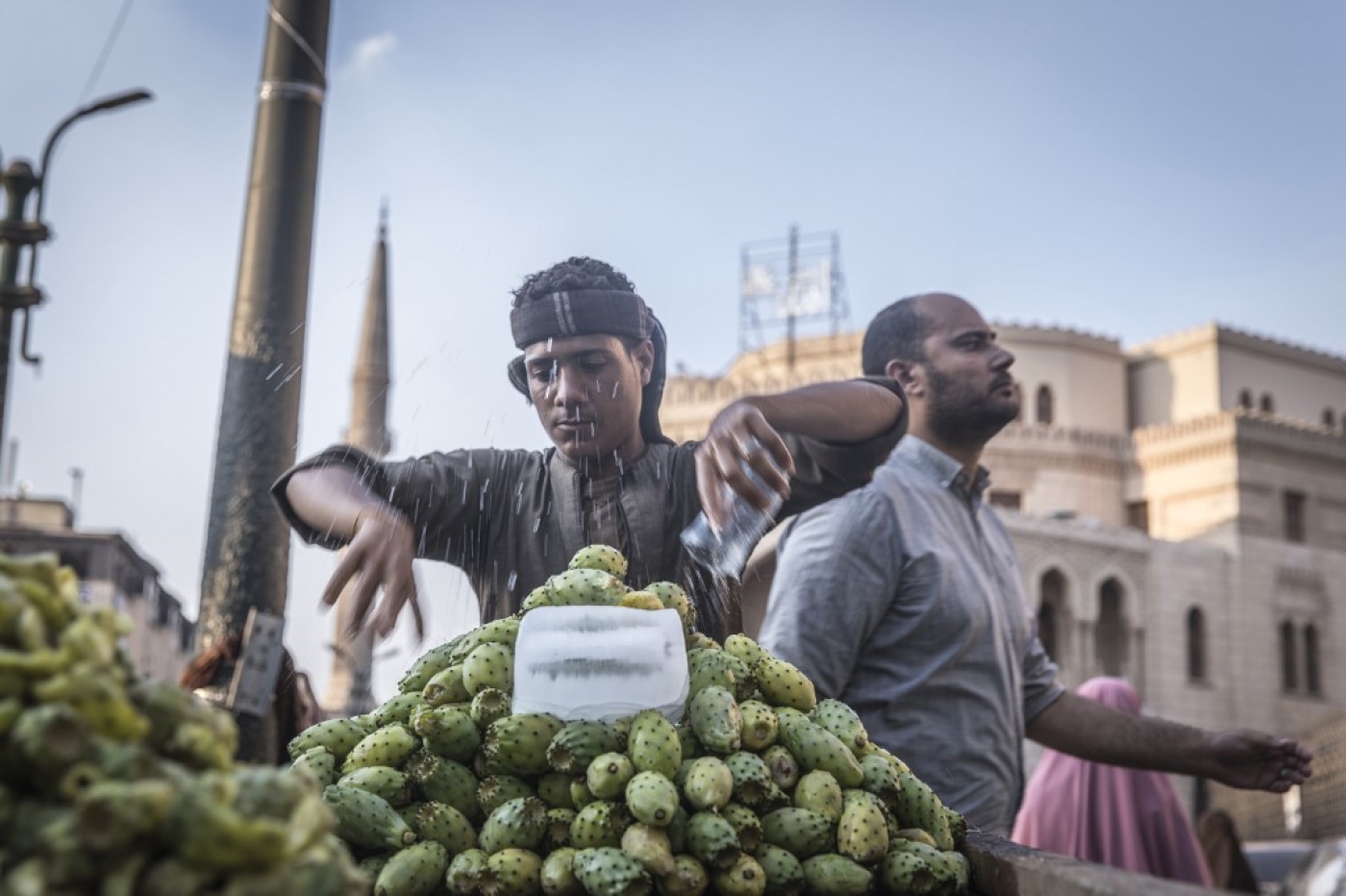 A street seller sells prickly pear fruit in Cairo. Half of the country's population now lives in or near poverty (AFP)
By
Tom Stevenson

In July, the International Monetary Fund approved the final tranche of Egypt’s $12bn rescue loan, marking the end of a programme aimed at pulling the country out of a protracted economic crisis brought on by years of political upheaval.

But three years on, the effects of the IMF deal with Egypt have been mixed.

In its final review of the programme, the IMF praised the Egyptian government for executing a package of fiscal austerity measures - including spending and subsidy cuts, privatisations, and a currency devaluation - designed to make Egypt more attractive to international capital.

The Egyptian government has for the most part followed the IMF’s strictures, and while the Fund will not continue to provide budgetary support, the Ministry of Finance is planning to request continued technical assistance from the IMF.

Yet while its macroeconomic indicators, including GDP growth, have improved there are several worrying trends for the country’s economy and financial health.

Over the past three years, Egypt's external debts have skyrocketed. The devaluation of the Egyptian pound has meant substantial profits for international currency traders, but living conditions for most of the population have deteriorated.

The IMF had hoped that its austerity programme, and especially the 2016 devaluation, would lead to rapid growth in exports. However, the only substantial export growth has come from the gas industry, which creates few jobs.

While Egypt's finances may have improved in some areas, in the longer term the country is still at risk. During the first three months of 2019, the current account deficit almost doubled.

According to Jason Tuvey, senior emerging markets economist at Capital Economics, there are good reasons to be pessimistic about the longer term outlook for Egypt’s economy.

“Many of the structural constraints facing the economy remain in place and will be extremely difficult to overcome,” he said, citing the sluggish productivity of the Egyptian economy as an example.

There have been some successes. Inflation, which peaked at over 30 percent in 2017, has been brought down to 9.4 percent. Unemployment has also fallen from a high of around 12 percent to 8.1 percent.

However, labour participation - the percentage of the population counted as part of the labour force - has fallen, suggesting an increase in long-term unemployment.

In July, the World Bank published an assessment of Egypt’s trajectory. It noted that the devaluation had not led to the growth of non-oil exports, and that Egypt will need to achieve GDP growth well above the current projected rate of 5.5 percent to provide jobs for a growing population.

The bank’s analysis showed that as the government has cut overall public spending, it has reduced spending on the health and education sectors to 1.6 percent and 2.2 percent of GDP, below the levels required by Egypt’s constitution.

“The government doesn’t appear to be committed to the structural reforms that are needed to significantly improve Egypt’s long-term prospects, such as increasing overall investment in the economy,” said Tuvey.

While traders have made a pretty penny off the devaluation of the pound, most Egyptians have seen a marked decline in their standards of living as a result of the IMF-induced measures.

Around half of Egypt's population now live in or near poverty

Around half of the population - a little under 50 million people - now lives in or near poverty which the World Bank defines as living off of $1.90 a day. Since 2011, the percentage of Egyptians living below the poverty line has risen from 25.2 percent to 32.5 percent.

Overall, most Egyptians have seen their real incomes fall, leaving them with less purchasing power.

This is in large part a result of IMF reforms, which saw the Egyptian government hike prices on cooking gas and oil, electricity and basic food stuffs such as bread, milk, and lentils.

On 5 July, another set of fuel subsidies was lifted, raising fuel prices for a fourth time since 2016. 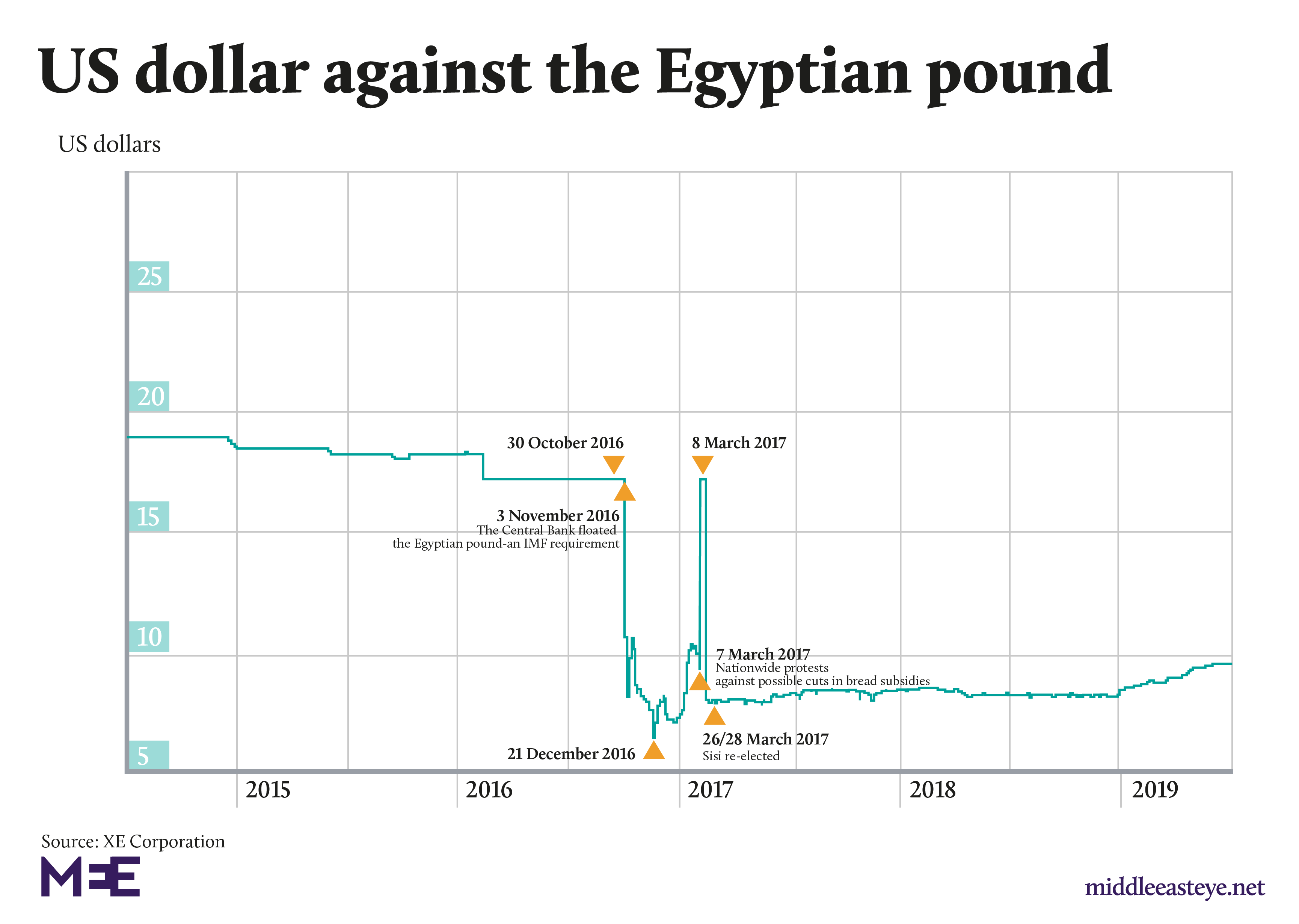 Meanwhile, carry traders who borrow at low interest rates in dollars and then convert into local currencies to buy bonds with high interest rates have flocked to Egypt’s market.

According to Bloomberg data, Egypt’s carry trade has been the most profitable in the world this year.

The IMF programme has also led to privatisations of state-owned companies to raise money for the state and attract foreign capital.

One of those is Eastern Company SAE, a tobacco company owned by the Egyptian state through a holding company, the Chemical Industries Holding Company, with a retired army general and former minister for military production on its board. In March, the company launched an initial public offering. Egypt and the cactus pear: My trip home
Read More »

Part-privatisations are also planned for the state-owned Banque du Caire and United Bank.

The government has begun to sell off state-owned companies in private share offerings to large international investors and Arab Gulf financial institutions, in addition to small public offerings on the Egyptian stock exchange.

However, companies owned by the Egyptian army, which make up a large portion of the economy, have not been included in privatisation plans. Under President Abdel Fattah el-Sisi, their revenues and profits have risen.

Businesses owned by the military have also been granted an exemption from a value-added tax levied on consumer goods introduced under the IMF programme.

Foreign direct investment in Egypt has declined this year as a percentage of GDP. At the same time, Egypt has racked up large international debts in foreign currencies by borrowing from international institutions and on international markets.

While Egypt’s borrowing from the IMF and other international financial institutions comes at low interest rates, its debts to international capital markets are not so soft.

In April, Egypt issued 750 million euros of debt in international bond markets at an interest rate of 4.75 percent. On 19 February, the government borrowed $4bn on the bond markets for between five and thirty years at around 7 percent interest.

Egypt’s dramatic increase in international borrowing since 2016 comes with risks. Should conditions in international markets change, the economy - which now has foreign debts equal to around 40 percent of GDP - may be vulnerable.

According to Pascal Devaux, senior economist for the Middle East and North Africa at BNP Paribas, Egypt may not be at risk of a balance of payments crisis - when it would be unable to pay for essential imports or service its debts - in the short term so long as the central bank maintains its dollar reserves.

“In the medium term, there may be vulnerability to a shift in foreign investor confidence, a deterioration of the energy balance, or a fall in tourism revenues,” Devaux said.

Interest payments on debts have become the largest single component in the government budget, representing 36 percent of total government spending. The level of debt to total exports has surged.

Around 70 percent of taxes paid by Egyptian citizens now go towards debt servicing, rather than funding development and public services.

Egypt’s Net International Investment Position – the balance of its assets and liabilities with the rest of the world – is now around negative 64 percent of GDP, well below the European Commission’s estimated prudential threshold for the country.

On 5 May, in recognition of the problem, the Ministry of Finance released a debt management strategy. The ministry aims to reduce reliance on short-term debt and borrow more from East Asia, in search of more favourable rates. However much of the plan appears recycled from a 2015 equivalent.

A modest recovery in the tourism sector, which is the country’s main source of foreign currency revenue ahead of Suez canal payments and hydrocarbon sales, has contributed to Egypt’s foreign currency reserves and boosted the economy.

However, the six-day suspension issued on 20 July by British Airways of flights to Cairo underlines that the recovery in the tourism sector is also vulnerable to shocks.

'Countries that devalue their currency usually see exports doubling or tripling, and that has not happened'

“I would not expect much additional growth from tourism in the coming years,” said Alia Mamdouh, director of macro and strategy at Beltone Financial, a brokerage company based in Cairo.

“There are a lot of structural issues in the tourism sector from years of lay-offs and shutdowns – the sector needs a lot of investment,” Mamdouh said.

The IMF had planned for the devaluation of the Egyptian pound to lead to growth in Egypt’s exports, which would support the national accounts and counter the risk of mounting debts.

But aside from the oil and gas sector, little growth in exports has materialised. “Countries that devalue their currency usually see exports doubling or tripling, and that has not happened,” Mamdouh told Middle East Eye.

In April, Egypt officially became a net exporter of natural gas. The Italian hydrocarbon major ENI announced in July the beginning of oil production from the West Meleiha concession, which ENI jointly owns with the state-owned Egyptian General Petroleum Corporation.

ENI has also made oil and gas discoveries at the Abu Rudeis and Al Qar’a concessions.

One step removed from risk

With the end of the IMF programme, Egypt’s economy still faces a range of risks to its long-term health.

A pull back from global financial institutions or an increase in funding costs for Egypt’s external debts could put the economy at serious risk. A further depreciation of the Egyptian pound or a decline in gas revenues are also risks.

Jason Tuvey, of Capital Economics, is sceptical that will happen. “We think that vested interests, including from within the regime, will be difficult to overcome and will continue to stifle structural reforms,” he said. Inside Jordan
Hundreds of Jordanians protest against IMF-backed tax bill