Egypt and the cactus pear: My trip home

Amr Khalifa
I spent 18 days in Egypt this summer, talking to everyone - the poor and the rich, those against Sisi and those praising him. But it was the cactus pear merchant who showed me what I really needed to see 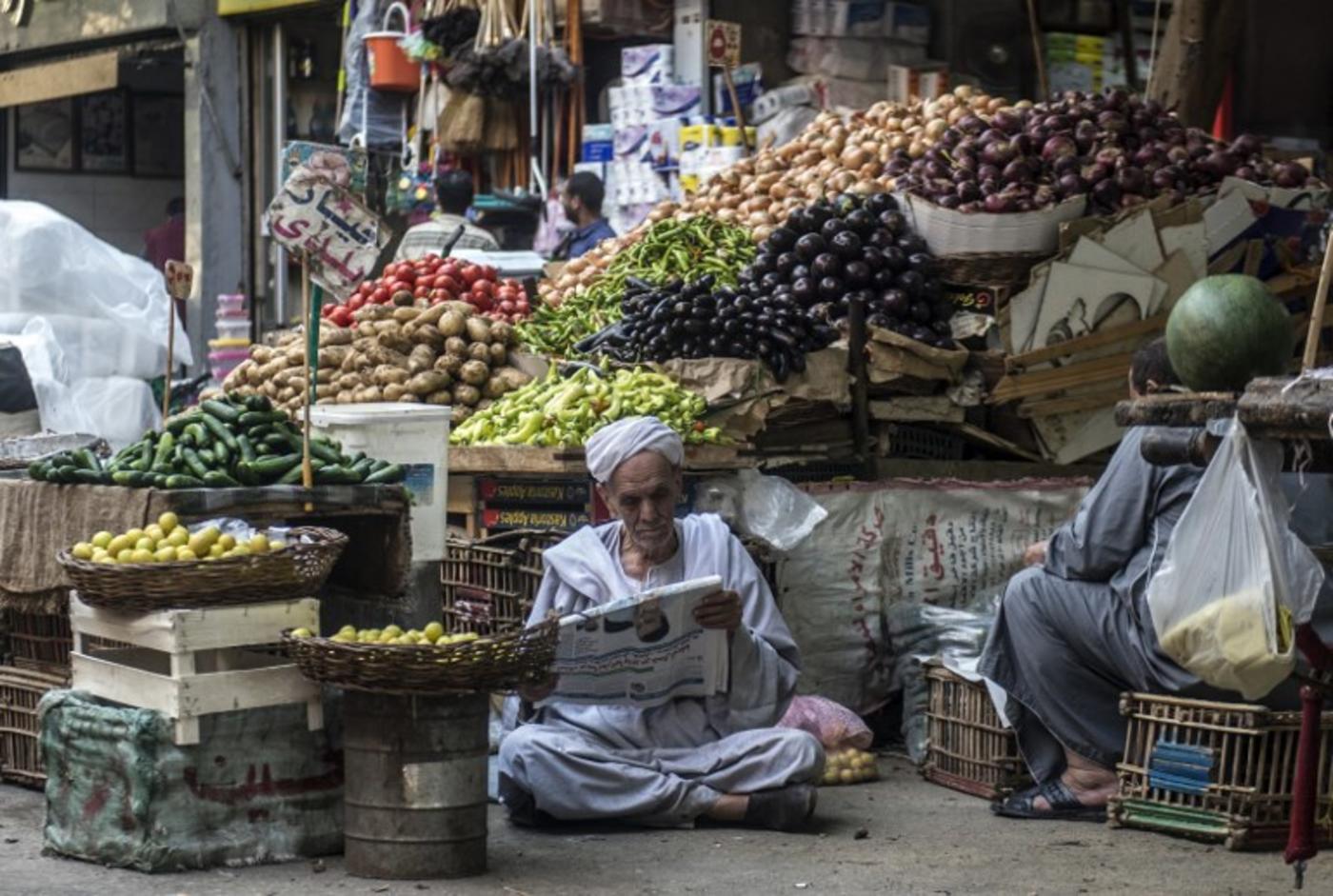 CAIRO - In the carefree days of my teenage years, each time the plane approached the Egyptian coast, my heart would dance.

But as an increasingly grey-haired analyst, trying to decipher the algorithms of authoritarian rule in Egypt, I have joined the ranks of those who fear sleep. You can read the latest Human Rights Watch report about pervasive torture in Egypt to know the source of our nightmares.

So when I peered out the window and caught my first glimpse of northern Egypt several weeks ago, panic stopped my heart from beating. Would I be let in?

In or out, it’s not a personal issue for those who rule: you undercut our narrative and we will, one way or another, look to undercut your existence as you know it. But somehow, I made it into the capital safely.

Touching down on Egyptian soil, after all these years abroad and no matter the stress, still gives the soul the chills. Who could have imagined – I certainly couldn’t - that a fruit, the cactus pear no less, would afford one a deep dive into Egypt’s underbelly.

Billy Joel could not have known when writing Pressure in 1982 that it would best describe the tenor of meals and conversations shared with fellow Egyptians this past summer. Many, though not all, feel it regardless of class, political leanings and academic degrees.

The IMF deal which so many deemed was necessary has put the economy, once simply at home with the flu, on a ventilator. In most of my conversations, it lingered around like an invisible companion.

Though most people I talked with couldn’t differentiate between gross domestic product (GDP), trade balance or core inflation (let alone one soaring over 30 percent for months on end), they knew one thing: prices had yet to stop a seemingly endless climb and they are suffering.

As far as the IMF is concerned now that the Egyptian pound has been devalued, it is at “genuine equilibrium”. But that “equilibrium” has seen the exchange rate double down from $1=8.88 EGP to a deadly $1=17.67 EGP, pulverising purchasing power, while dropping each class a rung lower.

With Egyptian wages remaining largely stagnant, an average family is bringing in just around $128 each month, according to August 2017 statistics. At nine EGP ($0.50), a single stuffed falafel at Felfela, a favourite Cairo spot, is a financial burden few can now afford.

The problem is that falafel and foul (stewed fava beans) are a staple of the Egyptian diet and all that stands between millions of Egyptians and the abyss of the poverty line.

In a perverse way, if everyone was poor and feeling equal pressure, a warped egalitarianism would at least buttress the fall towards the bottom. Instead, it is the brutal contrast between the haves and have nots that has plunged Egypt into the danger zone.

My first night back in Cairo was a study in this polarity. A powerful dollar made a five-star hotel overlooking the Nile feasible. For a few days, the hotel, built with the 1 percent in mind, made for an atypical home.

Imagine a 16X7-ft window overlooking a river so glorious that lights from passing falookas (small local boats) appear to offer an invisible bridge to the window in a room so pristine, dust is embarrassed to enter.

A 15-minute cab ride away, El Saida Zeinab square is as authentic a plot of land and humanity as you are likely to find in Cairo. If poverty had a voice, it would be screaming here.

Among the rich aromas of kofta and kebab in this impoverished locale were faces, alternately exhausted, stressed and, in some cases, ready to pounce.

Not all were zombified from the rigour of everyday Cairo life. The tiny down-home restaurant serving steaming meat dishes had smiling employees, probably thankful that they still had customers.

We had just finished a dinner so delicious that there was no room for anything else. But on the side of the street stood a man and a tiny wooden cart full of cactus pear, a summer port of call for Egyptians of all classes. The merchants peel away its prickly exterior to leave you with a soft, juicy fruit.

At first glance, there was nothing special about the cactus pear seller. But when I got closer, his ancient eyes told the definitive story, the sort that the government never searches for and wouldn’t know how to comprehend even if it found it.

I saw a man resigned to his fate, fatigued by daily travails and punch drunk because of a visibly failing business. In an instant, as he struggled to provide change for 50 EGP, he embodied millions of struggling Egyptians. He nearly teared up when change was left.

The cactus pear was also instructive in painting a definable portrait of class structure in the city: in Saida Zeinab, it sold for 1 EGP (six cents), in the 5th settlement, a posh suburb, 2 EGP (12 cents) and in downtrodden Faisal Street, within earshot of the pyramids, 50 piasters (three cents). It is not a nation united, but divided by teyn shoki (cactus pear).

Broken is not the only template found in Cairo right now. Anger and bewilderment, and in surprising places at that, were also in supply.

On a surprisingly chilly late evening, a couple in an upper-middle-class home explained that things had gotten very tight. Inside the compound where they live, they were insulated physically from the dusty nightmare of the masses, but not from economic stresses.

As he struggled to provide change for 50 EGP, he embodied millions of struggling Egyptians. He nearly teared up when change was left

While there was enough to eat and dress well, the private schools that had been affordable before the November 2016 devaluation were a stress point and long-term plans once clear had become foggy.

Four years ago, they showered Sisi with praise. Now with reality hitting where it hurts, they have intentionally tuned politics out.

While neither the cactus pear salesman, nor the well-off couple are a threat to the regime, they speak to Egyptians who once supported it – perhaps simply happy to see the Brotherhood defeated – fallen by the wayside of a rudderless leadership and more interested in perpetual governance than the people they govern.

Upper class Egyptians speak of an entirely different country. In conversations no less impassioned than their revolutionary counterparts, they talk of improved roads, on which I personally travelled, built by a disciplined army, the single force Sisi trusts.

They also highlight the growing tourism industry which has, indeed, improved over the past year, recording a $4.4bn in revenue, a 16 percent rise over 2016.

How difficult would it be for a terrorist to repeat the Russian airliner disaster by gaining access to a plane by bribing a deeply impoverished baggage handler?

But optimists I met neglect three crucial details: these figures are less than 40 percent of the 2010 total of $11.6bn, the increase in the past year is likely a result in tourists looking to pounce on advantageous euro and dollar exchange rates, and one major terrorist attack can reverse short-term gains.

Why the pessimism you ask? Having travelled twice during this trip through Cairo and Hurghada, the country’s hyper-important tourism hub on the Red Sea, I can tell you that the security measures that Egypt lauds are still lacking.

While checking into a Cairo to Hurghada flight, my lighter was confiscated after it showed up on a scanner. On my return, I had not one lighter, but three. Lighters and writer made it back to the capital without issue. The system would also fail to detect another lighter two weeks later.

So even in the security arena, Egypt’s failing economy rears its ugly head: with nearly everyone struggling financially, that longstanding tradition of baksheesh (tips) can make the best security vulnerable.

How difficult would it be for a terrorist to repeat the Russian airliner disaster by gaining access to a plane by bribing a deeply impoverished baggage handler? If tourism is one of the main lifelines for the nation, those operating it need to be paid the highest wages to reduce vulnerability.

Just this week, the Egyptian state-run press – the chief creators of the "Sisi as saviour" lie - claimed that during his speech at the UN General Assembly, Egypt’s president presented a roadmap for the world. To these journalists, a question must be posed: has the Sisi roadmap saved the Suez Canal, Egypt’s tourism or its economy - let alone the world?

Looking for hope? I found it in brilliant individual cases – a selfless doctor, a young pharmacist with an unparalleled devotion to the nation and an intellect to match and a rare teacher getting the job done in a failing educational system.

But such successes are the acts of single individuals who, unfortunately, can't change a broken system.

Two questions were asked repeatedly during the 18 days of my trip - an ironic overlap with the greatest 18 days in Egyptian history: where will change come from? Who is the alternative to the disease coursing through Egypt?

We will know change has come when instead of building new prisons to compliment the 504 sites where the regime has imprisoned 60,000 political prisoners, we start building hospitals, schools and factories. But this won’t happen without an eruption.

As for leaders, if they are the likes of the selfless doctor, that young man from housekeeping in that five-star hotel or the cactus pear seller’s son, there will be hope after the inevitable bloodshed.

But if it is an eruption led by the army against one of its own yet again, then we garner the worst of both worlds: more blood and more of the same. The army is, to use an Egyptian saying, a carpenter whose door is always broken. It should recognise its limits and stick to protecting the nation’s borders.

I wish I could say this trip provided answers. It did not. But it did shine a light through the fog of Egyptian politics and bring some needed clarity. But clarity, unfortunately, cannot shield you from the sadness of knowing the prickly reality, especially when you know how sweet the promise of fruit is that lies beneath.

Photo: An Egyptian vendor reads the newspaper outside his fruit and vegetable stand in Cairo in May 2017 as austerity measures fuelled decades-high inflation (AFP)