'Egypt with no slums': Authorities displace residents for mummies and modernity 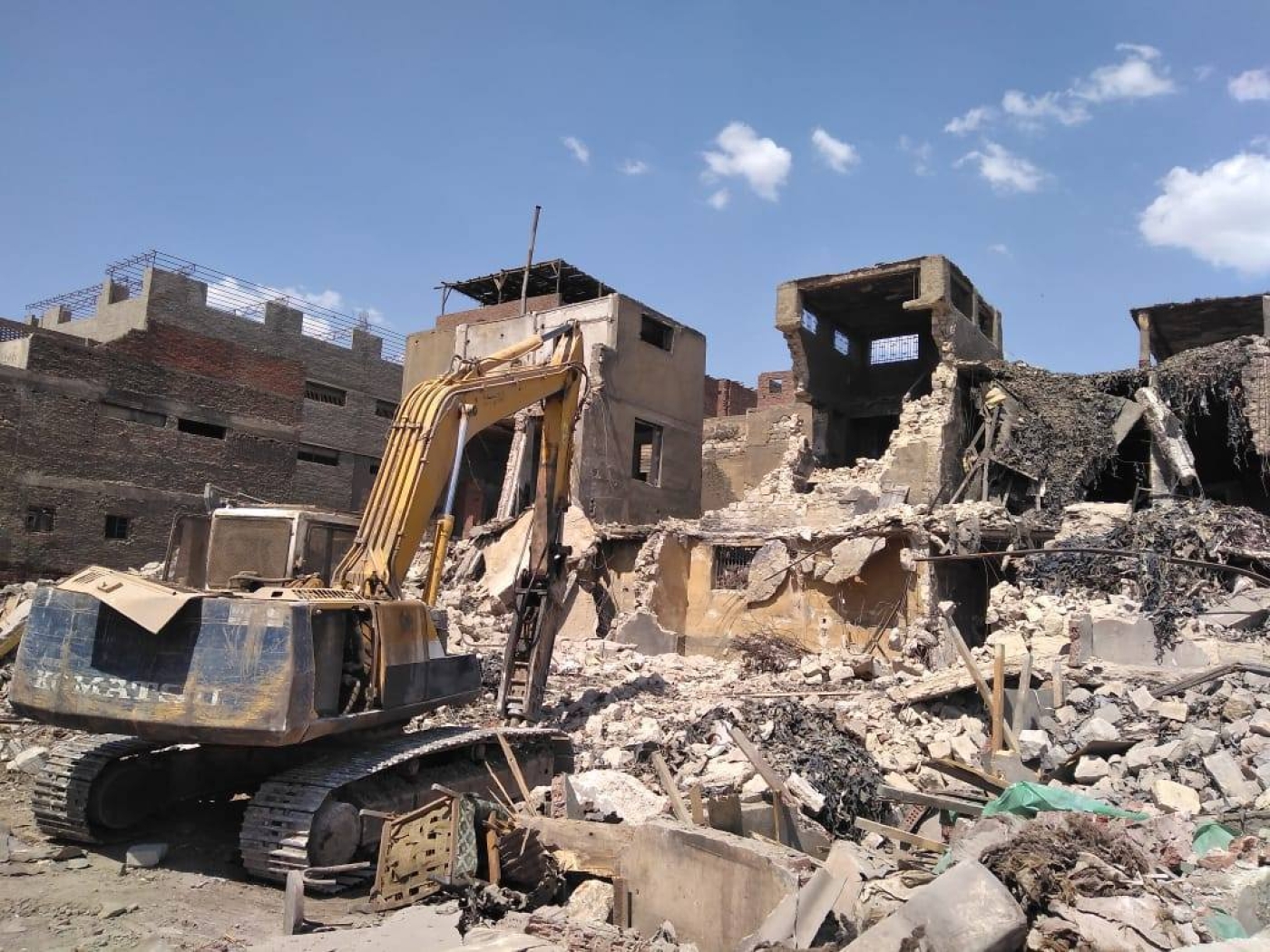 Demolition underway in Magra El Oyoun, just one of the areas affected by a new project to regenerate Old Cairo (Supplied)
By
MEE correspondent
in
Cairo

In a resplendent ceremony watched by hundreds of millions of people worldwide, Egypt transported 22 ancient mummies through Cairo to a new national museum on Sunday, in what was called the Golden Parade.

The 18 kings and four queens were moved from the Egyptian Museum in central Cairo, where they had been exhibited since the early 1900s, to a new museum six kilometres to the south, the National Museum of Egyptian Civilisation, a vast new facility located in Fustat, Islamic Egypt's first capital.

The royal procession of performers in traditional costumes and chariots played on nationalist sentiment and Egypt's historical importance, as those following the event watched the remains of kings and queens more than three millennia-old, slowly parade to their new home. But forgotten in the fanfare were the Egyptians whose lives have been turned upside down, the collateral damage of a vast and controversial regeneration project meant to renovate Egypt's Old Cairo.

As the 40-minute parade rolled south from Cairo's Tahrir Square to Fustat, it passed by the ruins of different residential demolished neighbourhoods.

The Egyptian government is bulldozing lower-class districts to establish several tourism complexes with 5-stars hotels, cafes, restaurants, and The National Museum of Egyptian Civilisation - where the mummies are now resting.

No official numbers have been released, but rough estimates suggest hundreds of families have been affected.

Middle East Eye talked to former residents in neighbourhoods demolished since 2019. While some were offered alternative housing options, others were forcefully kicked out of their houses, arrested, threatened and even ended up on the street.

Mostafa*, 36, a cafe worker who used to live in one of the residential areas of Magra El Oyoun, watched the convoy at work on TV. Some of his customers wanted to witness the spectacle as they drank coffee.

Magra El Oyoun is a long aqueduct in the historic Fustat area of Old Cairo, in the city's south, which extends to the 12-century Salah al-Din citadel. The area had been left unattended and ignored for years, leading to the construction of several illegal buildings and makeshift homes. Government demolitions in the area started in 2016.

Mostafa stood watching as his house was demolished this February. He had been living there with his family of six since 2001. They had to evacuate and are now living in Giza, on the western side of the Nile, in a rented flat that is much smaller.

He felt isolated by the patriotic euphoria the parade elicited, he told MEE, as no one knows how much his family has suffered.

"My heart was broken and I felt helpless," he added. "The police came and told the whole street in November [2020] that they have to evacuate and demolish the area by January."

Last March, Prime Minister Mostafa Madbouly said that 771 families in the area had been resettled after 1,076 facilities and 454 residential buildings were removed. Other families who didn't have the right documents had to find alternative housing on their own. Despite having contracts and official papers, Mostafa's family were among them.

Mostafa said that some of the evicted families are still homeless. "I know a family who sent their daughters to work as domestic help while the men work as construction workers earning a daily salary."

"My father decided we had to move and avoid any trouble, also because we had a mother, sisters, and wives who we didn't want to endanger," Mostafa said.

"What happened is a crime. They kick out the poor and cannot even lift a finger to hold the rich accountable."

'Egypt with no slums'

According to a source in the Ministry of Local Development, nine working-class areas, or "slums" as the government calls them, are in the way of the newly-rejuvenated Fustat, a new tourist destination in the middle of Old Cairo.

The source added that the demolitions would pave the way for a long sidewalk overlooking Fustat’s Ayn al-Sera lake, which will be extended to Fustat Park. A cable car will transport visitors from Fustat to Al-Azhar park, further north. The source showed MEE presentation slides of what the ministry thinks the new project, named Ayan al-Hayah (or source of life), will be like.

Egypt is desperate to attract foreign tourists and entertainment-based investments after the considerable political turmoil in 2013 and the downing of a Russian passenger jet in 2015.

But to implement their strategy, the lives of working-class residents have been deeply affected.

Sajda, 37, a geography teacher who used to live in Koum Ghorab, in Old Cairo, minutes away from the new National Museum of Egyptian Civilisation, was also evacuated from her house along with her sisters and parents.

The government said in March that the demolitions of Koum Ghorab were to "develop the path of the roads of the royal mummies parade".

'Egypt with no slums'

"The demolitions have taken place after granting new contracts and flats to the affected residents in the Asmarat social housing district," Jihan Abdel Monem, deputy of the Cairo governorate, told MEE, adding that "the demolitions will continue to remove all slums, following the new orders of the political leadership, under the slogan 'Egypt with no slums'."

"The new plan has since the beginning aimed to add a touch of civilisation and beauty to the area by getting rid of the slums," Monem said, adding: "This can only be done by moving residents to a more safe and livable area."

Sajda* and her family's apartment was among 42 homes that were demolished, beginning in November 2020 until January 2021. They were denied a new place as they were only renting their flat. The governorate offered to transfer the residents' furniture to wherever they wanted, but in trucks used to transport rubbish.

'I am an educated person and all my family is unlike how the government depicts us. We know the importance of monuments and tourism'

The unilateral decision to displace citizens has changed the lives of Sajda and her family. She and her father are the only breadwinners and their new location adds three hours to their daily commute.

The Egyptian government has repeatedly asserted that drug trafficking, violence and prostitution are common in these "slums", with many pro-government newspapers describing them as a “cancer”.

Sajda watched the parade along with her sisters. "I am an educated person and all my family is unlike how the government depicts us. We know the importance of monuments and tourism."

But the swell of celebrations and pride on social media left her feeling frustrated and alienated. "Why would I be happy for the people who kicked me out of my house and put me on the street?"

Sajda's neighbour Nifesa* was also displaced but was offered an unfurnished flat in the Al-Asmarat housing project in Cairo's Mokattam district.

She complains that the flat is much smaller than the one she had and that it is far away from her family's places of work.

On Sunday, in a meeting with Audrey Azoulay, the director general of Unesco, President Abdel Fattah el-Sisi affirmed that Egypt is taking steps "following the balanced path between development efforts and the preservation of the value and integrity of unique archaeological sites, including the development of all historic areas in Cairo," according to a presidential statement.

He added that the goal is to make the capital of Egypt "become an open museum that reflects the nobility of ancient and contemporary Egyptian civilisations".

As the nationalist furore around the parade and inauguration of the museum continues, hundreds of other families around Fustat await their evacuation orders.

"The people need to know that for this event to take place, hundreds of families are suffering,” Sajda told MEE. “I will be proud of my country when I am treated decently and humanely.”

* Resident's full names were not used because of safety concerns.

his article is available in French on Middle East Eye French edition.