Egypt restricts use of pseudonyms after article calls for Sinai ‘independence’ An Egyptian regulator has issued a decision banning writers from using pseudonyms without its consent, in a further setback for press freedom in the country.

On 12 May, Egypt’s Council for Media Regulation, an independent authority that monitors media operations, announced that print and online media outlets would be required to submit a request that clarifies the reason for using pseudonymous bylines, the duration of using them in addition to the writers’ real names.

The controversial decision has been added to the code of conduct of media outlets stipulated by the regulator last year.

The media regulator’s call is believed to have been triggered by a series of op-eds published in the daily Al-Masry Al-Youm newspaper under the pseudonym Newton.

In the articles, the writer - who was later identified as the newspaper’s founder and co-owner Salah Diab - suggested that the Sinai Peninsula be turned into an autonomous region with an independent ruler and be only affiliated with Egypt in matters related to border security and foreign policy.

'Ironically enough, pseudonyms have been mostly used by journalists working for state-owned newspapers who had no chance to speak their minds'

As the controversial op-eds drew widespread criticism, whether on social media or by Egyptian media outlets, the council investigated the incident, imposing a set of penalties against the newspaper.

Following the interrogation of Diab and the paper's chief editor Abdel-Latif El-Menawy on 22 April by the media council officials, the regulator described press freedom in the country as being “not ultimate".

Deputy head of the media regulator justified the decision by telling Egyptian daily El-Watan newspaper that the reason behind it was to “protect the intellectual property rights of writers”.

At the same time, he added, it helps hold accountable whoever violates the code of conduct, writing in a pen name.

“When an article is published, it becomes the responsibility of the newspaper not the writer’s,” he argued.

However, Banna said that the decision can still be contested before the state council, an independent judicial entity exclusively tasked with adjudicating administrative disputes, disciplinary cases and appeals.

In case a journalist errs, Banna explained, the newspaper is the entity legally held accountable for his or her wrongdoings. “The law and the constitution safeguard freedom of the press, which doesn’t entail an unfamiliar restriction, in this case, a journalist who doesn’t want to disclose [his or her] real name,” he explained.

“How can they control the practice in the local press? Perhaps the council can manage to detect writers using the names of famous figures; but what about those writing under ordinary names?” He wondered.

“Ironically enough, pseudonyms have been mostly used by journalists working for state-owned newspapers who had no chance to speak their minds,” he told MEE.

El-Balshy is the former head of the Egyptian press syndicate’s freedoms committee and the current editor-in-chief of Darb online newspaper, one of the few remaining free voices in the Egyptian press, recently blocked by authorities.

Over 500 news portals as well as official websites of local and international organisations, including Human Rights Watch and Reporters Without Borders, were blocked in Egypt shortly before the 2018 presidential polls.

Egypt was ranked number 163 out of 180 countries in press freedom, down two ranks from 2018 based on the World Press Freedom Index released by Reporters Without Borders in 2019.

Throughout the history of Egyptian media, several renowned journalists and writers wrote under pseudonyms, a common practice also adopted all over the world.

Among them was late prominent writer Anis Mansour who was commissioned by Rose al-Youssef weekly magazine to follow news about ousted King Farouk in Europe. Mansour wrote articles on the removed king under a woman’s name.

Another example is that of late 20th century journalist Mostafa Amin, the founder of Akhbar El-Youm institution, who wrote for several years a column under the humorous Arabic pseudonym “Mamsous”, criticising the subsequent regimes he had survived.

BBC journalist Emir Nader tweeted, expressing disappointment in the media council’s decision, saying that “pen names…can be necessary for telling a story or expressing an opinion that otherwise wouldn't be heard”.

"I hope that editors can still find a way to protect their contributors," he wrote.

“May God be with you, Roshdy Abaza, who may find himself obligated to quit writing after this resolution,” he wrote

Some of the pseudonyms El-Zelakny mentioned were used by late 20th century journalists, after famous Egyptian actors who lived during their times.

The government of president Abdel Fattah el-Sisi, in power since 2014, has been adopting a legal framework holding back media freedom in a country where about 60 journalists are behind bars, either detained without trials or serving time.

This restrictive media environment has prompted many journalists to write under pseudonyms to be able to express their views freely without being persecuted.

In some cases, journalists use pseudonyms when they work as staff writers for publications that do not allow them to write elsewhere.

Some use fictitious names of scientists or artists, while others just use ordinary names.

“I work for a state-owned newspaper where I don’t get to express my views freely,” one journalist told MEE.

“So I resort to writing stories under pseudonymous bylines in outspoken outlets, mostly abroad,” he added, on condition of anonymity.

Another who also declined to be named, said: “I have to work for more than one outlet at the same time under pen names to be able to provide a decent living for my family. Most of the reporters working for the local press don’t make much in Egypt.” 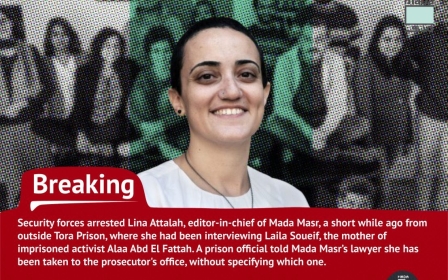