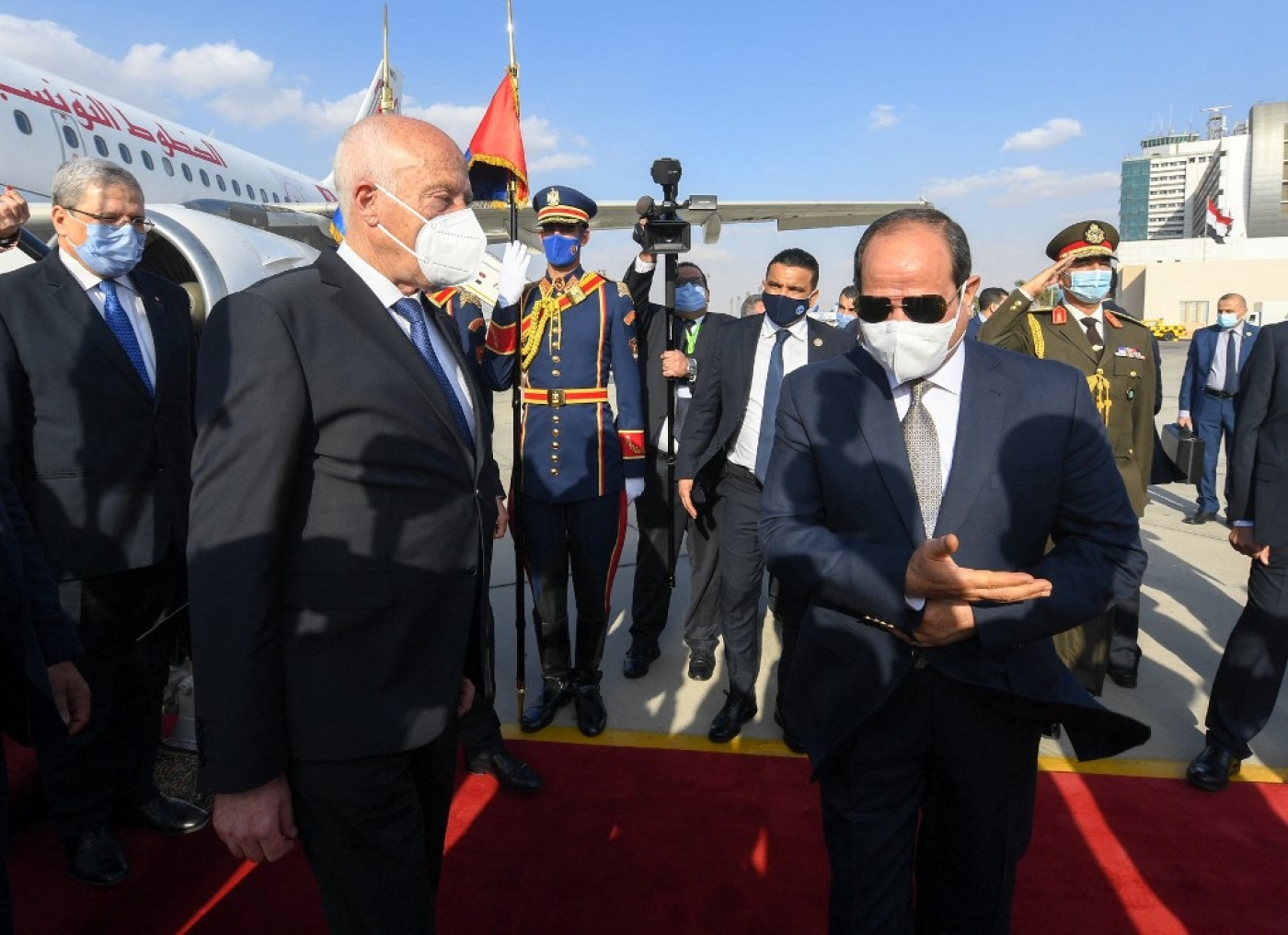 Egypt's foreign minister has said that his country is expressing "full support" to Tunisian President Kais Saied, whose power grab ten days ago has been denounced as a "constitutional coup" by his opponents.

"We affirm the full support of the Arab Republic of Egypt for the stability and the fulfilment of the will of the Tunisian people," Sameh Shoukry said after meeting Saied in Tunis on Tuesday.

Egypt's Ministry of Foreign Affairs statement said that Shoukry conveyed a message from President Abdel Fattah el-Sisi to Saied, which noted that Egypt is expressing "solidarity and support."

Tunisia: Why the surprise? Kais Saied has displayed his authoritarian streak from the start
Khalil al-Anani
Read More »

The statement added that Egypt backs Saied's efforts which are "aimed at responding to the legitimate aspirations" of Tunisians for stability and development "in a manner that preserves the national state institutions and protects the capabilities and free will of its people."

Saied has plunged the country into further political turmoil since his decision on 25 July to freeze parliament, oust the prime minister Hicham Mechichi and assume executive and judicial powers in Tunisia for a period of 30 days. He has so far not presented a roadmap for his plan, triggering fears of a return to authoritarian rule.

Middle East Eye (MEE) has revealed that Mehchichi was physically assaulted the night before he agreed to resign.

He was summoned to the presidential palace on 25 July where Saied sacked him. Once at the palace, Mechichi repeatedly refused to quit, according to MEE sources.

He was then beaten in the presence of non-Tunisians, which MEE understands were Egyptian security officials who have been advising Saied before the coup and directing operations as it was taking place. It is unclear what role they played in Mechichi's interrogation.

"Sisi offered to give Saied all the support he needed for the coup and Saied took it," one of the sources said.

The Maghreb Street newspaper reported Mechichi's denial that he was forced to resign but MEE stands by its report.

MEE understands that Mechichi sustained "significant" injuries after being assaulted.

Mechichi has not been seen in public since the resignation, amid online campaigns raising questions about his alleged "disappearance."

Egypt's Shoukry said on Tuesday that Tunisia is witnessing "a historic moment, undertaken by a person who attaches the highest importance to the values of democracy, the constitution, and institutions."

Saied's last visit to Cairo was in April 2021 where he met Sisi, a field marshal who came to power in June 2013 through a military coup, which ousted the democratically elected government headed by Mohamed Morsi, a leading member of the Muslim Brotherhood.

Saied justified his power grab by citing article 80 of the constitution, which allows the head of state to take unspecified exceptional measures in the event of an "imminent threat".

The purge of top officials has so far targeted at least 30 people.

Tunisia's transition to democracy is viewed as the sole success story of the 2011 Arab Spring uprisings, many of which were violently put down or became civil wars.

Saied insists that his power grab is not meant to derail Tunisia from its democratic path. But his moves were followed by a crackdown on critics, including a raid of Al Jazeera's offices in Tunis and the issuing of arrest warrants against several lawmakers and legal advocates.

Authorities have also opened probes against the country's two largest parties, Ennahda and Heart of Tunisia, based on allegations that they received foreign funds during the 2019 election campaign.

The United States urged Saied and Tunisian officials on Saturday to steer the country back to the "democratic path".

Since the 2011 popular uprising that overthrew former president Zine el-Abidine Ben Ali, Tunisians have seen 11 governments, including Saeid's in 2019.

The country is battling an economic crisis and the Covid-19 pandemic, which saw the death of 20,226 people.