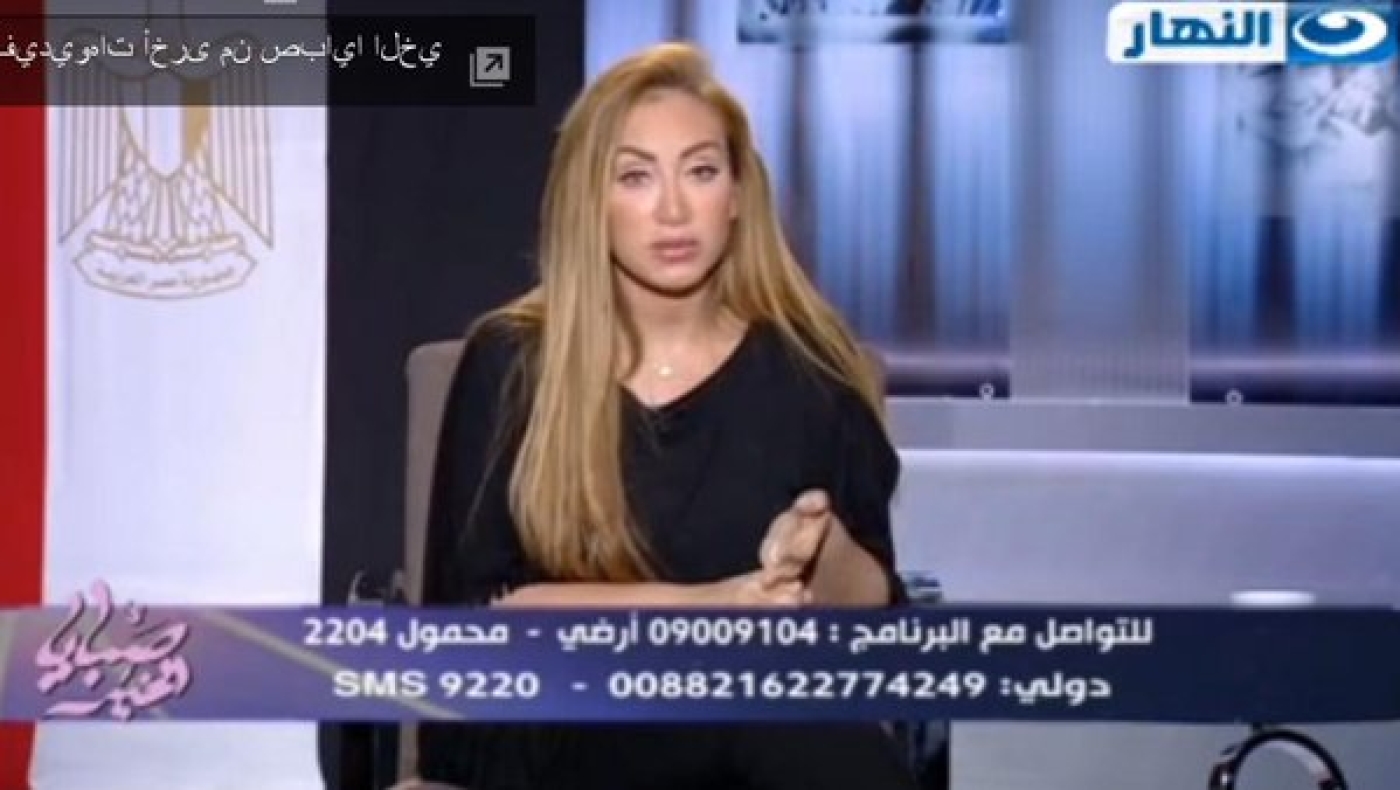 A photo shared on social media shows Riham Saeed presenting her show on Egyptian television (Twitter)
By
MEE and agencies
An Egyptian television station suspended a female presenter's programme on Friday following online outrage after she shamed and allegedly stole personal pictures from a sexual harassment victim on her show.
Stressing its "respect for all women and girls", the privately owned Al-Nahar channel said it had suspended Riham Saeed's programme and opened an internal investigation into the incident.
Verbal and physical sexual harassment is rampant in Egypt, where a 2013 UN survey found that more than 99 percent of women polled said they had received unwelcome sexual advances.
Women say they are harassed regardless of whether they wear conservative Islamic veils or Western-style clothing.
On Tuesday, Saeed's show aired CCTV footage from a Cairo shopping mall showing an argument between a young woman and a man, who is seen slapping her twice before security guards intervene.
In her show Saeed interviewed the woman, who said the man had verbally harassed her. When she threatened to call security, he hit her.
The presenter then began a monologue in which she blamed the victim herself.
She also broadcast photographs that she claimed "were sent to her" - showing the woman in a car with a bottle of alcohol and in a swimming costume on the beach being carried by a man.
"If I accept being carried like that in a bathing costume, I'm definitely going to accept anybody flirting with me," Saeed said.
"Girls whose behaviour encourages boys have to be held accountable," she said, referring to girls who "smile at them, look at them, speak to them and wear daring clothes".
The young woman later accused the show of stealing photos from her phone for the interview, an accusation the presenter denied.
Social media users expressed their outrage with Arabic-language hashtags including #boycott_Riham_Saeed urging a boycott of her show's sponsors.
In response, 17 companies on Thursday said they were withdrawing their advertising from the show.
On Wednesday, the student appeared in tears on another private television channel, saying "I should have just slapped myself" and kept quiet.
"I thought she would help me," the woman said of Saeed. "She destroyed my life."