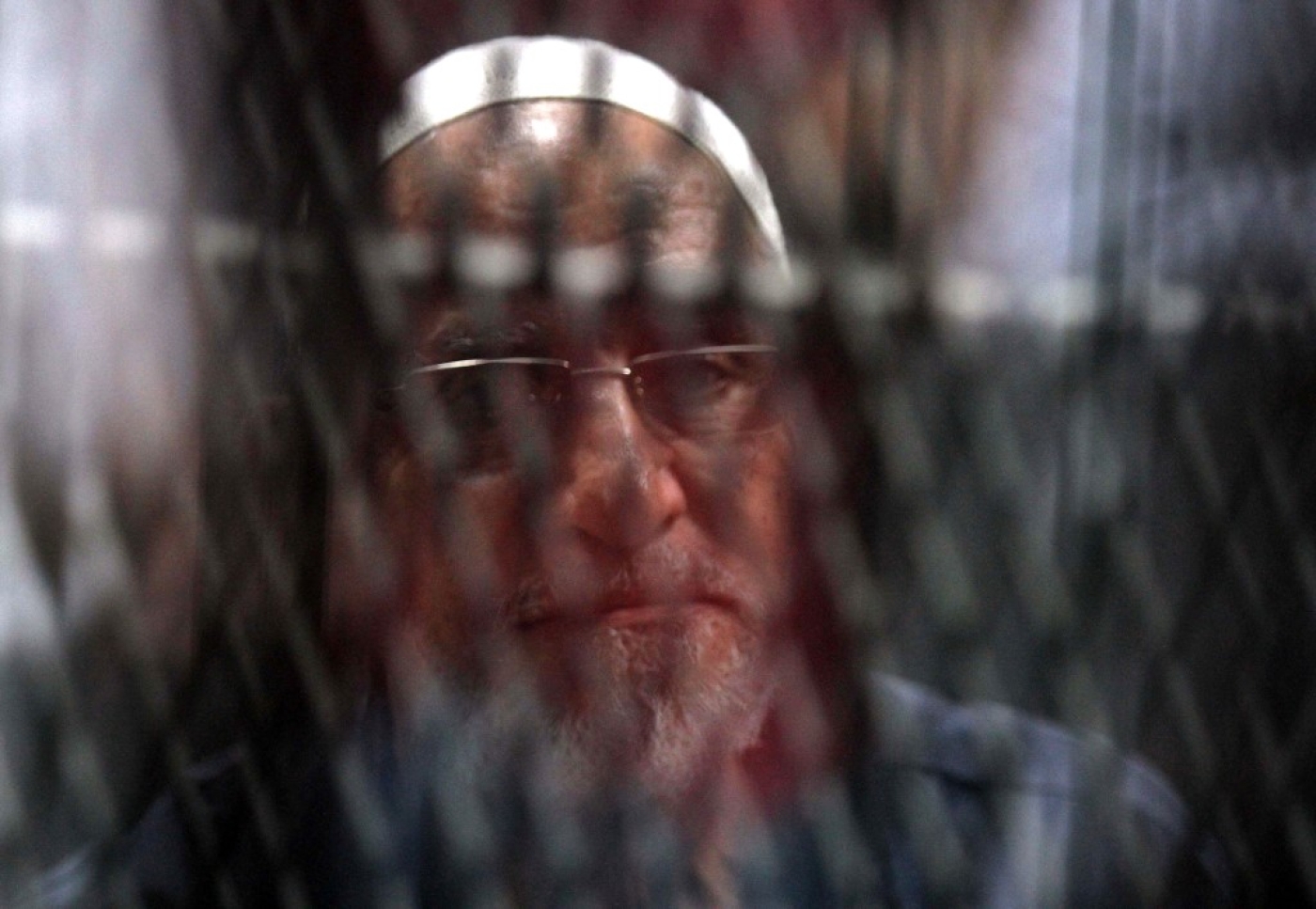 Mohamed Badie, the leader of the Muslim Brotherhood, was in the courtroom with other defendants for Wednesday's verdict (AFP)
By
MEE staff

An Egyptian court issued its final verdicts on Wednesday against top officials from the Muslim Brotherhood and the administration of late President Mohamed Morsi on charges of espionage.

The verdicts mark an end to a five-year trial of the highest-ranking officials of the Muslim Brotherhood and democratically elected Morsi government, which was ousted from power by a military coup in July 2013.

According to Judge Mohamed Sherin Fahmy, 11 officials, including Brotherhood leader Mohamed Badie and his deputy Mohamed Khairat el-Shater have been sentenced to 25 years in jail on charges of espionage for foreign powers.

Five others were sentenced to jail terms ranging from seven to 10 years, while six were aquitted, the AFP news agency cited a judicial source as saying.

Former national security advisor to the Morsi government, Essam El-Haddad, was sentenced to ten years, according to final verdict announced by the judge in a live broadcast on pro-government channels on Wednesday.

The trial, first started in 2014, has been condemned by Human Rights Watch as “politically motivated”, with convictions based solely on the testimony of security officials.

The defendants initially included 36 people, but Wednesday’s verdict excluded those who had been tried in absentia.

The first verdicts were issued on 16 May 2016, but were later reversed by the highest appeals court and a retrial has been ongoing since November that year.

The case accused the 36 defendants of orchestrating the 2011 revolution and conspiring to topple the Hosni Mubarak regime between 2005 and 2013 through acts of espionage with foreign powers, including the Palestinian group Hamas, the Lebanese Hezbollah movement and Iran, along with a number of western countries.

Morsi received a life sentence in 2016 in the same trial, but he collapsed in a courtroom during a hearing in the case on 17 June after requesting the right to speak to the judge and died soon after.

Morsi, a senior member of the Muslim Brotherhood, was elected in Egypt's first-ever democratic presidential election in 2012, after a popular uprising overthrew longtime leader Mubarak.

A year into his rule, Morsi was removed by the Egyptian military in a coup led by his own defence minister, Abdel Fattah el-Sisi, who would go on to become president.

Since then, Sisi has embarked on a massive crackdown on dissent and free speech. He has also banned the Muslim Brotherhood, blacklisting it as a terrorist group.