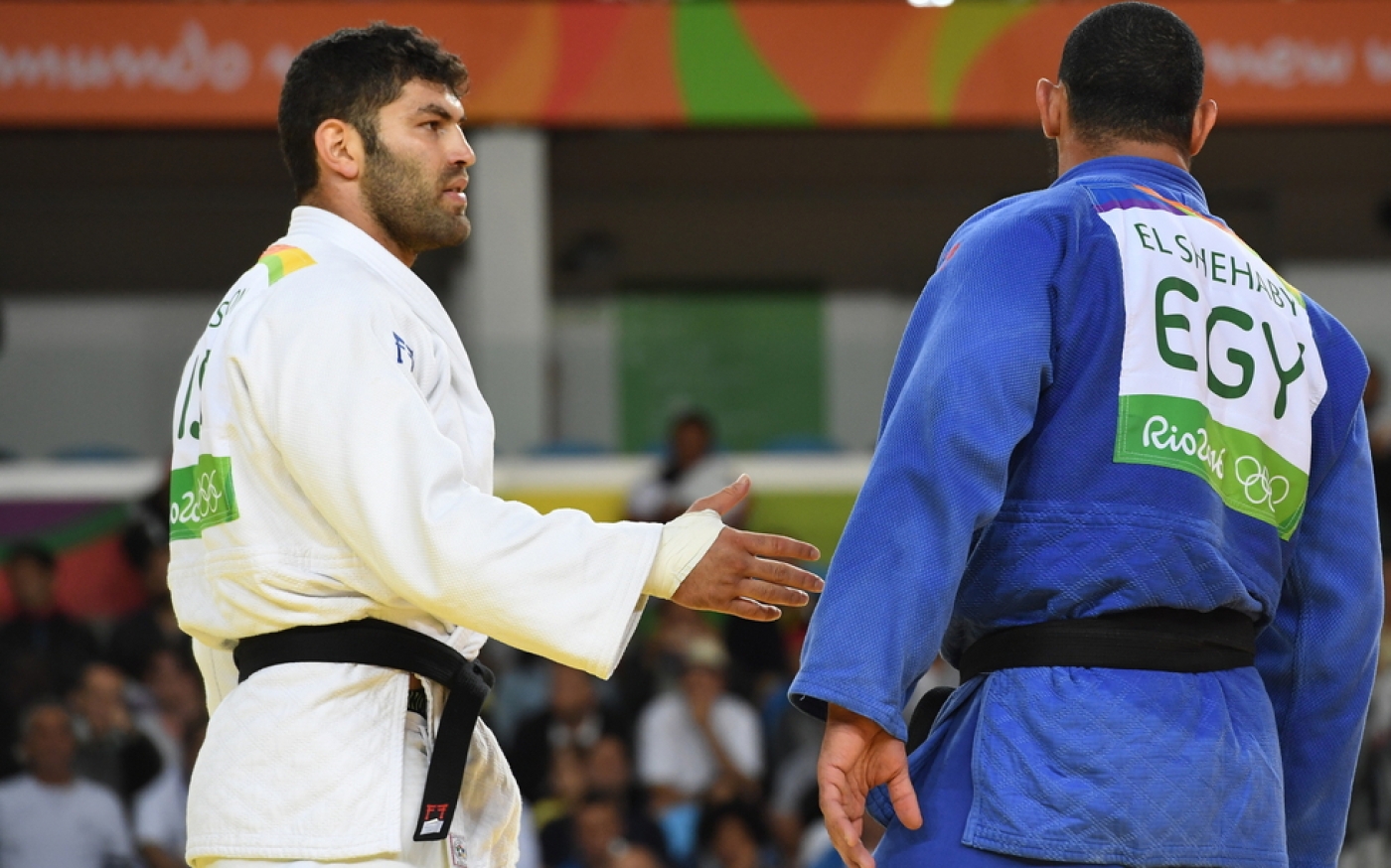 Egyptian judo competitor Islam El Shehaby refused to shake hands with Israel's Or Sasson after their match at the Rio Games on Friday, drawing boos from the crowd.

However, activists who support the Boycott, Divestment, Sanctions (BDS) movement, which calls for political and economic pressure to be exerted on Israel over its illegal occupation of Palestinian territory, hailed El Shehaby a "hero."

El Shehaby, 32, had been reportedly pressured by fans on social media not to show up for his scheduled fight with Sasson, but he decided not to withdraw from the match.

After Sasson defeated El Shehaby and the two retook their places in front of the referee, Sasson bowed and approached El Shehaby to shake his hand, but the Egyptian backed away.

Nicolas Messner, a spokesman for the International Judo Federation, said judokas are not obligated to shake hands under IJF rules, only to bow, which El Shehaby did after he was called back.

"Nevertheless, after the Games the situation will be studied and analysed to see if further action must be taken," Messner told Reuters.

While some pundits say boycotting fellow athletes because of their nationality goes against the spirit of the Olympic games, many supporters of the Palestinian cause consider the conduct an act of defiance against Israel.

They point to the fact that Israel has blocked the chief of the Palestinian Olympic team from leaving the besieged Gaza strip for the Rio games.

This is not the first time Arab Olympians in Rio have stirred controversy with their behaviour toward Israeli athletes.

Earlier in the tournament, the Lebanese Olympic team refused to share a bus with its Israeli counterpart.

"Because you do not normalise with apartheid regimes, you boycott them. Gold medal for Lebanon. #BDS #BoycottIsrael," Diab Abou Jahjah, the founder of the Arab European League, tweeted on Monday after the bus incident.

Saudi judoka Joud Fahmy reportedly forfeited her first match at the games to avoid facing an Israeli opponent in the next round.

But the Saudi Olympic delegation tweeted that Fahmy had suffered injuries in her hand during training and did not quit for political reasons.

Tweet reads: "Joud Fahmy suffered injuries in her hand and foot during training, and the medical committee recommended she not participate in the judo competition in the Rio Olympics today."

Even though some incidents at the Olympics have been fraught with antagonism, other happenings have highlighted the unified spirit of the Games.

On Thursday, a German entrepreneur in his 50s became the first person to represent Palestine in the equestrian competition in what he described as a gesture to make a political point about Germany's relationship with Israel and its responsibilities also to "push for peace" in the Middle East.

“We as Germans carry a special responsibility for the Jewish people and for Israel,” said Christian Zimmermann, a descendant of German composer Robert Schumann who holds dual German and Palestinian citizenship.

“But this responsibility also means that we must push for peace in the Middle East conflict, as difficult as that may be.

“On top of that you can be critical of the development of Israeli policy in recent years. So finally I decided to ride for Palestine, as a gesture towards the Palestinian people.

“If, by competing in the Olympics, I can contribute in some small way to giving the region and its inhabitants a bigger voice, I have been successful."

Zimmermann finished 57th out of 60 competitors.