No Hajj and no hugs: How will Eid al-Adha be different for British Muslims this year?

While coronavirus restrictions are less strict than during Eid al-Fitr in May, the pandemic continues to affect how Muslims are able to celebrate the holiday 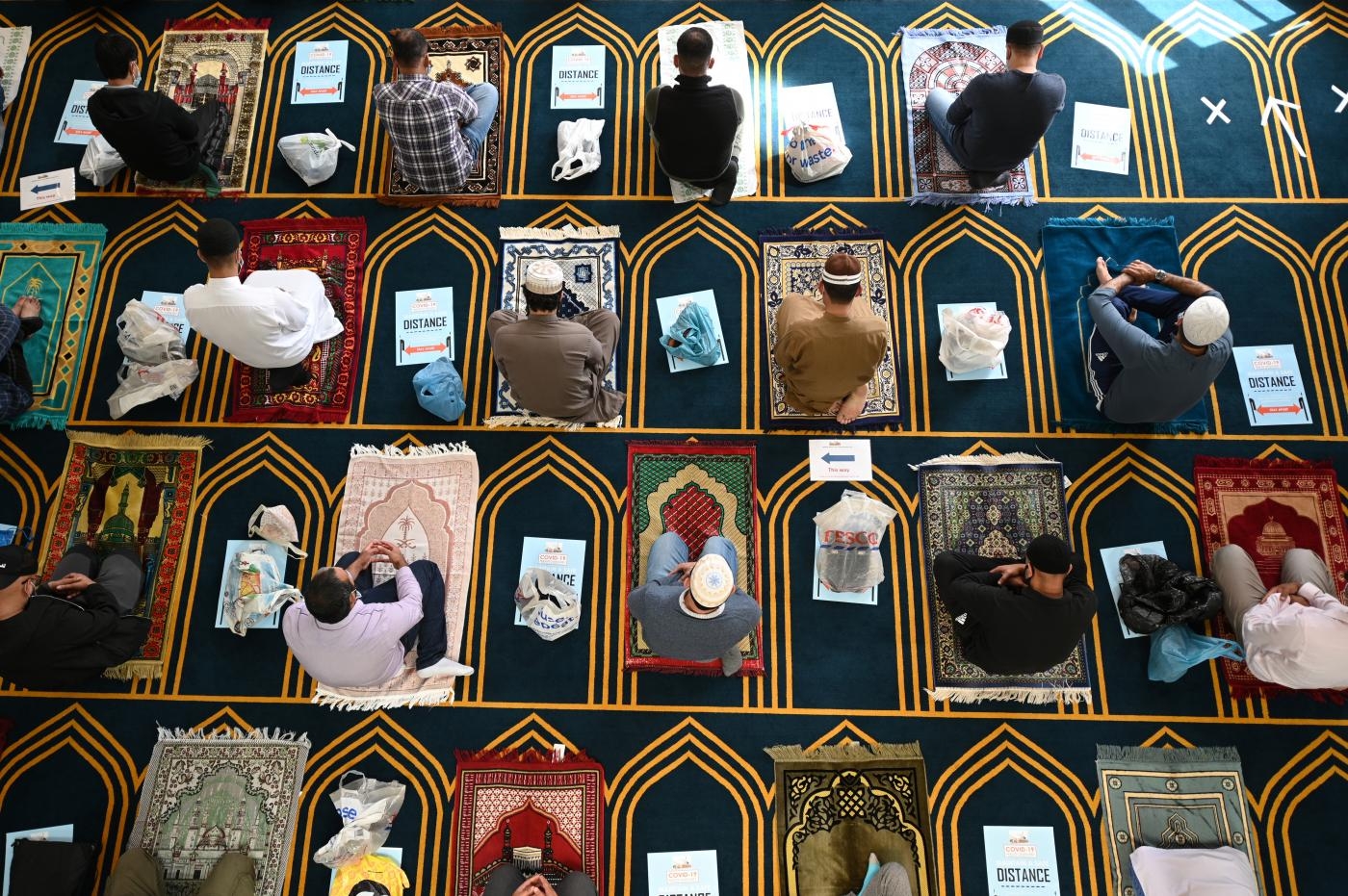 UK Muslims will be able to perform congregational Eid prayers, after places of worship were reopened by the government this month (AFP)
By
Rayhan Uddin
in
London

As Eid al-Adha approaches this Friday, British Muslims already know what it’s like to celebrate a religious festival during the coronavirus pandemic.

Eid al-Fitr, which marked the end of the month of Ramadan, fell on 24 May, when the UK was in full lockdown and the Covid-19 death rate fluctuated between 300 and 500 cases a day.

There were no congregational Eid prayers, and Muslims were encouraged to stay home by celebrities including Great British Bake Off winner Nadiya Hussain and ITV journalist Rageh Omaar. The UK government even took out paid adverts urging Muslims to remain indoors - leading to accusations of double standards after Victory in Europe (VE) Day celebrations marking the end of World War Two prompted street parties covered live by national media.

For the second Eid of 2020, British Muslims will not be under quite as many restrictions as two months ago.

However, this Friday’s festivities will still be very different to previous years.

The most noticeable change to this week's Eid will be the lack of British Muslims, or indeed any non-Saudi Muslims, performing the annual Hajj pilgrimage.

WATCH: A downsized Hajj begins in Mecca as pilgrims practice social distancing at the holiest site in Islam #Hajj2020 pic.twitter.com/DJuNDur8UY

Around two million worshippers go on Hajj each year, and its completion marks the beginning of three days of Eid al-Adha celebrations.

For Mustafa Ahmed, the director of a family-run Hajj tour company for British pilgrims, the weeks leading up to Eid are usually a very busy period.

“Normally around this time of year, in the lead up to Hajj, we’re preparing our clients. Taking them to the Saudi embassy to sort out visas, creating ID cards and itineraries for them, telling them what to pack, and liaising with hotels and transport in Saudi to make sure everything is sorted,” he told Middle East Eye.

"Of course, none of that is happening this year."

Instead, Ahmed has spent recent weeks trying to arrange refunds.

“We’re expecting refunds for flights with Saudi Airlines, but we’ve also given a lot of money to hotels and suppliers in Saudi and there’s not much hope of getting that back,” he said.

'The Saudi government did the right thing. However, communication has been poor'

In June, Saudi authorities confirmed that international pilgrims would not be allowed to attend Hajj this year due to the pandemic. Instead, fewer than 1,000 people inside the Gulf kingdom will perform the pilgrimage.

“The Saudi government did the right thing. However, communication has been poor and the timing of when they said it had been cancelled was poor,” Ahmed said. “I understand that Hajj is a big economic driver so they couldn’t cancel it really quickly but, realistically, they could surely see it coming.”

Ahmed’s father normally accompanies the tour groups every year, performing Hajj in the process each time.

“This will be the first year in as long as I can remember that my dad will be in the UK for Eid. He’s upset about it, the time he spends in Saudi every year gives him a sense of peace.”

Many other British Muslims have been left distraught after being forced to cancel their Hajj bookings.

"I was inconsolable when I read the announcement that Hajj was cancelled," Aksa Khan told Middle East Eye in June.

Khan explained that her family may have to wait several years to go again, as this would be the last Hajj for some time to take place during British school summer holidays.

"We had been preparing for this moment spiritually, psychologically and physically and thought 2020 would be our year," she said.

Feeding those impacted by pandemic

Eid al-Adha, which translates to the "festival of sacrifice", honours the prophet Ibrahim (Abraham), who Muslims believe was willing to sacrifice his son Ismael as an act of devotion to God. To commemorate this event, Muslims offer qurbani - the sacrificing of an animal and the sharing of its meat with family, friends and poorer communities.

'I urge you to look around the world to our brothers and sisters who are suffering the most, and give them a lifeline'

“In order to keep our beneficiaries, our staff, our volunteers and our partners safe, social distancing, the use of PPE and good hand hygiene is being utilised.”

The Food Standards Agency produced guidance last month approving the supply of qurbani meat in the UK during Eid, as long as the current Covid-19 guidelines were followed.

Many, however, have opted to donate this year’s qurbani to communities outside of the UK who have struggled to cope with the impact of the pandemic.

“Here in the UK, Eid will be celebrated differently because of the pandemic. We are fortunate that for most of us here this represents only an inconvenience, but the same cannot be said for those who are in refugee camps in Lebanon and Syria, in war-torn areas in Yemen, conflict zones in Palestine, or where poverty runs rife in parts of Pakistan,” Mohamed Ashmawey, the CEO of development charity Human Appeal, told Middle East Eye.

Ashmawey said that it was vital for British Muslims to support the world’s most vulnerable people celebrating Eid amid poverty and conflict, particularly given the added threat of the pandemic.

“If you are still deciding where and how to give your qurbani, I urge you to look around the world to our brothers and sisters who are suffering the most, and give them a lifeline… to feed themselves and their families this Eid.”

Unlike during Eid al-Fitr, Muslims will be able to perform congregational prayers after the UK government announced the reopening of places of worship earlier this month.

“Mosques must not feel rushed into reopening, but should only take this step when they feel it is safe to do so within their individual context,” Harun Khan, secretary general of the Muslim Council of Britain (MCB), said following the decision.

The MCB, along with the British Islamic Medical Association, have published guidance on how Eid can be celebrated in accordance with public health advice in England.

A poster guidance has been issued on how to celebrate Eid Al Adha safely in England, in line with latest @PHE_uk regulations.

It recommended that family gatherings should be kept to a minimum, and shaking hands and hugging should be avoided. Muslims customarily embrace friends and family shortly after the end of Eid prayers.

The guidance also suggested that prayers should take place outdoors, and sermons should be kept short. Where outdoor prayers were not possible, mosques were advised to hold multiple congregations to help maintain social distancing.

In many mosques around the UK, including in North London, Cambridge and Birmingham, Muslims will only be able to perform Eid prayers if they book tickets in advance. Worshippers have also been instructed to bring their own prayer mats and wear face masks at all times.

People over the age of 70 and those with underlying health conditions have been strongly urged not to attend prayers.

Muslims in the UK are thought to have been disproportionately impacted by the coronavirus.

A government inquiry found that people of Black and Asian origin had higher Covid-19 death rates than other ethnic groups. Those of Bangladeshi background, of which the vast majority are Muslim, were twice as likely to die than those who were white British.

Five Muslim doctors and a Muslim nurse were among the first frontline health workers to die from the virus in the UK. 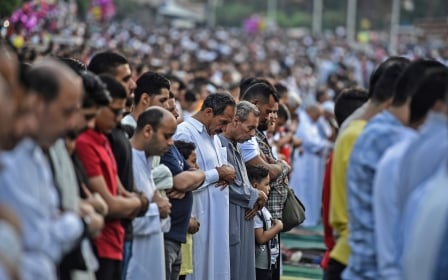