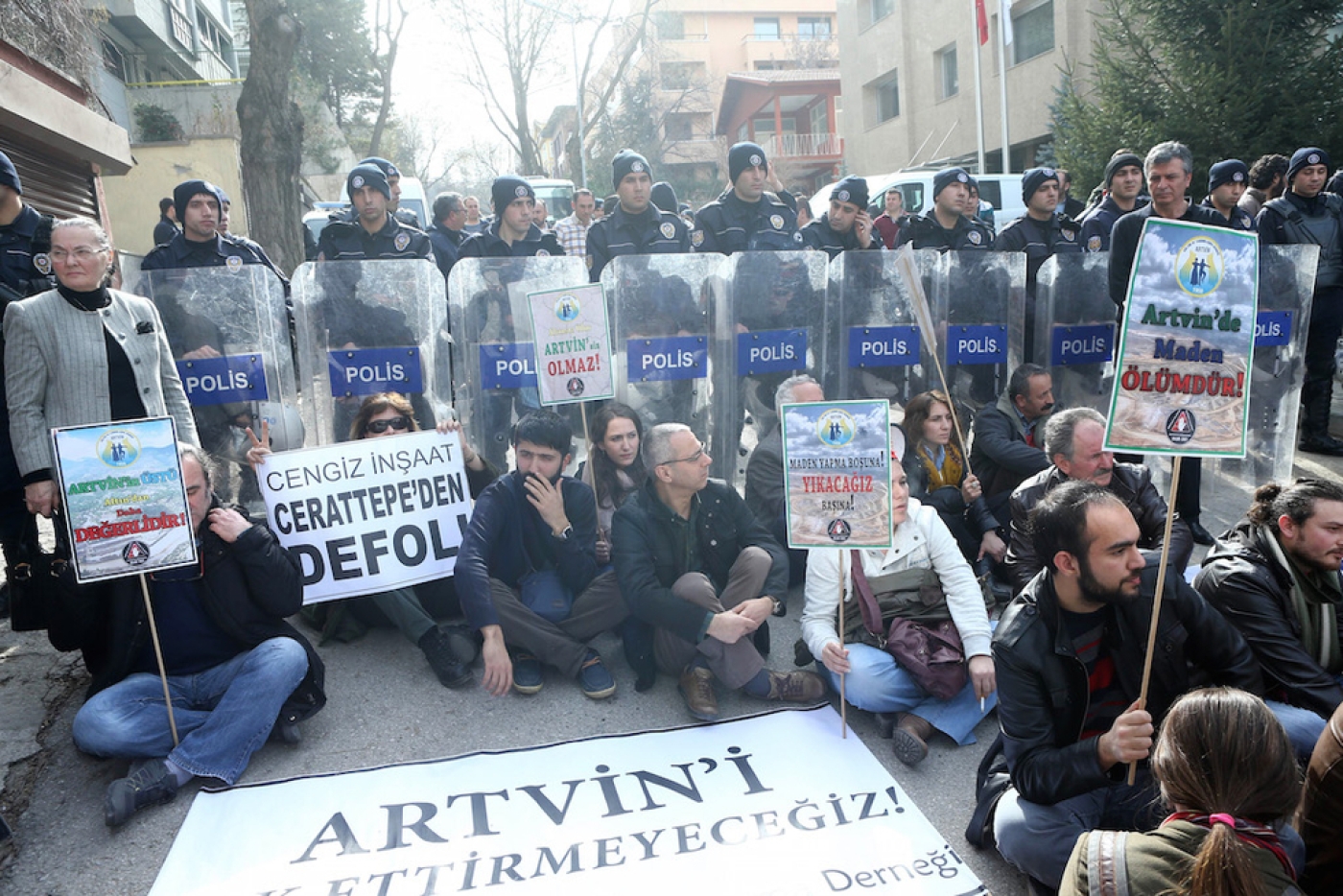 The Cerattepe hill overlooking the city of Artvin in Turkey's northeast is one of the country's most idyllic areas of natural beauty. The area is one of the most biodiverse in Turkey, home to more than 600 plant species, 26 of which are distinct to the area, and hundreds of animal types including roe deer, wild boar and grey wolves.

Mining companies have long coveted Cerattepe, which is home to huge reserves of copper, gold, silver and mercury. For more than two decades, locals in Artvin have campaigned to prevent the destruction of Cerattepe and Artvin's ecosystem - often with great success - against a number of Turkish administrations.

However, in the last year their struggle has entered a new phase as local authorities have used powers given to them by the state of emergency law imposed following the failed 15 July coup attempt to suppress protests and arrest activists.

Sercan Dede is one of the latest generation of campaigners determined to prevent what he calls an "environmental massacre" in his home city.

"I am nearly as old as the struggle for Cerattepe. I have grown up in a resistance atmosphere since my childhood," he told Middle East Eye.

"Before the mine, our villages disappeared due to dams built in our city. They demolished a world-famous river, Coruh. Then, hydroelectric power plants were constructed on our small streams.

"Cerattepe is the last thing we have. We protect Cerattepe so that our city survives."

Reportedly, 202,800 tonnes of pure copper metal can be extracted from the deposits in Cerateppe, as well as 37 tonnes of gold and at least 1,200 tonnes of silver.

The first drilling in the area took place in 1992. In response to an increase in animal deaths allegedly as a result of pollution caused by drilling, locals formed the Green Artvin Association in 1995, which has been at the forefront of opposition to drilling.

Over many years, the organisation has managed to block a number of attempts to drill the hill. In 2009, with help from the Artvin Bar, they took INMET mining, a Canadian company that had been handed the license to mine the area, to court and succeeded in having its license cancelled.

Now their main adversary is Cengiz Holding, in partnership with Ozaltin Holding, which acquired the license for drilling in 2012,

The company filed an Environmental Impact Assessment (EIA), which came back positively but was then overturned by an administrative court in Rize. Not long after, Cengiz Holding received another EIA which was also positive. A complaint was filed by 61 lawyers with 751 signatures in July 2015, seeking again to overturn the EIA.

As the case progressed, protests became more frequent, with thousands of people demonstrating in Artvin and across Turkey, with barricades set up and bins set on fire in an attempt to prevent construction from progressing. Protests saw 20,000 people demonstrating out a total population of 25,000 in Artvin.

The state of emergency implemented in July allowed the Artvin governor to impose restrictions in September on "all rallies, press releases, meetings, sit-in protests, distributing notices and similar activities ... due to violent activities that can emerge before, during or after them".

Despite the outcry and protests, and despite the issue becoming a major political rallying point for opponents of the governmnet and environmental activists across Turkey, eventually the court ruled in favour of the government in October.

But the fight is not over.

"After Rize administrative court decided that the mining can be done, our lawyers took it to the council of state," said Dede. "We are waiting for their decision right now."

Increasingly, the language used against the environmental protesters has framed them as a threat against the state and in league with illegal militant groups.

The pro-government newspaper Sabah reported that the activsts had links to the outlawed Kurdistan Workers' Party (PKK), while another pro-government paper reported last August that the "fake environmentalists" were under the control of Germany.

Police have become increasingly heavy handed with the activists, deploying tear gas and firing plastic bullets against the crowds. Dede has been has been taken into custody repeatedly and while he has not been formally arrested, others have been subjected to lawsuits.

In January, 48 people stood trial for violating a ban on demonstrations and “resisting police officers” during last February's protests. More than 200 overall are facing trial for their involvement in anti-mining activism.

"Actions against mining are prevented. All kinds of demonstration are forbidden," said Dede. "Recently, we, four young people from Artvin, were taken into custody, because we wanted to post posters against mining. As a result, we were served with a considerable fine."

In addition to the police, the activists have faced threats from ultra-nationalists.

In September, a far-right group calling themselves the Patriotic Youth of Rize warned that they were "not going to allow" any disruption to be caused by environmental activists.

The group warned that "foreign forces which carry out all sorts of evil acts in order for our country to get into chaos and get separated have now used 'Cerattepe' as an excuse".

"They are trying to provoke the pure and naive people of Artvin in order to create a second Gezi Park atmosphere," it said, referring to the 2013 demonstrations against the government which were initially sparked by environmental protesters in Istanbul.

President Recep Tayyip Erdogan himself has referred to the protestors as a "junior Gezi".

Their statement ominously added that "in case of furor[e] and attacks that these people could carry out, we are going to bring along with us our ‘support tools’ as a necessary precaution".

All this has hardened the activists and forced them to plan for the new challenges. Along with other youth activists, Dede formed the Artvin Youth Organisation for the purpose of opposing the mining plans "strongly and militantly".

Figuring prominently in the Cerattepe dispute is Mehmet Cengiz, a businessman known to be close to Erdogan.

According to Bloomberg, Cengiz sits with Erdogan's son on the board of a charity at a university named after Erdogan and is originally from Erdogan's hometown.

In 2013, he figured prominently in the corruption scandal that rocked Erdogan’s government.

Cengiz gained notoriety shortly after thanks to a wiretap in which was heard to vow to "f*** this nation’s mother".

His company has won the largest number of public tenders in the last 15 years, including projects for dams, bridges and Istanbul’s third airport.

"It would be not possible for Cengiz Holding to grow fast and have several other mines in the northern region in Turkey if it was not supported by the Erdogan family," said Defne Gonenc, a PhD candidate in political science & international relations at the Graduate Institute of International and Development Studies in Geneva.

According to Cumhuriyet newspaper, Cengiz has six offshore companies managed by Seref Dogan Erbek, a man currently wanted by US authorities for financial manipulation and fraud.

After the story was reported by Cumhuriyet, Cengiz allegedly rang the paper and accused them of being "sons of bitches".

New business projects, however, are likely to seem highly attractive to the Turkish government at the moment, coming at a time when the country's economy has been hit by terror attacks and instability and the resulting flight of tourists and investors.

"The region has a huge potential for eco-tourism," Defne Gonenc told MEE.

"It shows that (both foreign and domestic) capital prefers short-term gains to long-term sustainable investment. The region is extremely suitable for winter sports and eco-tourism. It is as beautiful as Swiss Alps. But international capital prefers to obtain immediate but short-term profits, especially in the developing countries.

"Can you imagine a gold mining being opened right next to a Swiss skiing resort in the Alps? The developing world is becoming the short-term profit pool to plunder for the Northern capitalists."

MEE contacted the Artvin governor's office for comment, but at time of publication had not received a response.

The Cerattepe case is currently with the Council of State, Turkey's highest administrative court, where the Artvin protesters hope to see the mining claim kicked down the road again.

However, the situation in Turkey is changing rapidly. The large-scale reassignment of judges across the country following the coup has left the independence of the judiciary in question, and Gonenc suggests that litigation will soon no longer be enough to prevent the advancement of the mining project.

"If the presidency referendum allows Erdogan to obtain more powers in April, Artvin people will really need to carry on with their struggle trough stronger mass political opposition," she told MEE.

"They are in need of urgent international support. Greenpeace needs to change its policy against not getting involved in gold-mining cases too.

"Most importantly, in the long term, if the region's eco-tourism potential is used, both the likelihood of mining operations will decrease and more people will benefit from the beauty of the region. Of course, it will also provide better income to the local people."

Turkey has many long-running causes which have generation after generation of activists have taken up and continue to support after their parents and grandparents drop the torch.

The people of Artvin look set to continue campaigning to prevent mining in their city and, despite the setbacks, their drive appears undaunted.

"We will annoy the people who support mining in our city," said Dede.

"We will struggle for ending the state of emergency in our city. We will create public pressure required for this.

"Everybody can be sure that we will do everything that is required to save our city."