Unbothered by growing tensions with Cairo, Ethiopians eager to proceed with filling of Nile River dam, deal or no deal 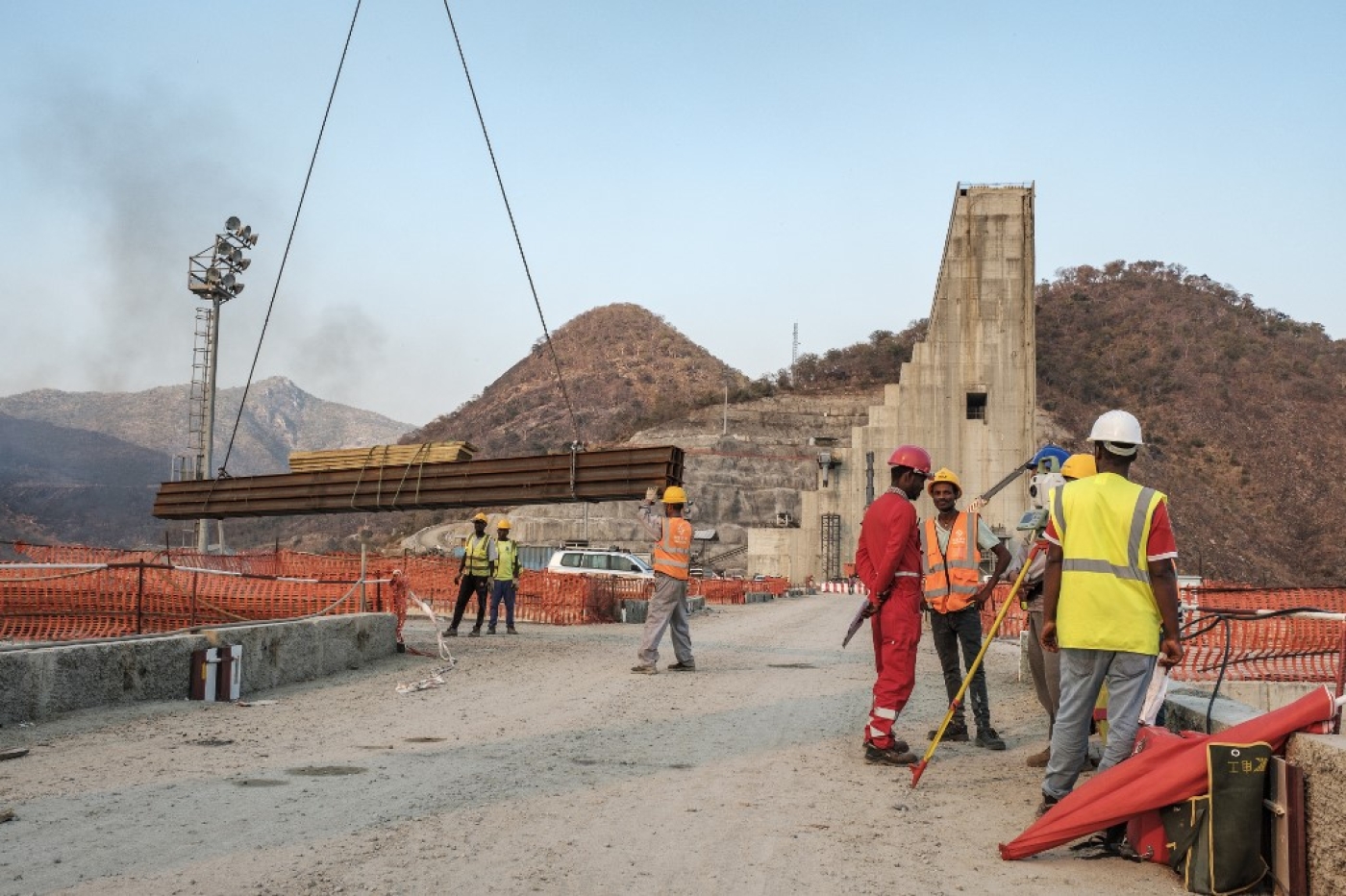 A general view of the construction works at the Grand Ethiopian Renaissance Dam, near Guba in Ethiopia, December 2019 (AFP)
By
Zecharias Zelalem
in
Addis Ababa, Ethiopia

Ethiopians remain undeterred by signs of a looming fallout between Cairo and Addis Ababa over the latter's plans to commence the filling of what will soon be Africa’s largest hydroelectric power dam on the Nile River in the coming weeks.

The Grand Ethiopian Renaissance Dam (GERD) has been a sticking point between the two states for years.

With a recent last-ditch mediation effort by Sudan proving fruitless, chances of an amicable solution diminish by the day.

Ethiopia remains adamant that the dam is the country’s solution to dealing with chronic power outages and poverty. Egypt contends that the dam will significantly reduce its supply of Nile River water and endanger its people.

'There is no power in our village. Because of that, there are no schools here either. My children hike across meadows and mountains everyday to get to the nearest school,'

The inability to reach an agreement on technical aspects of Ethiopia’s planned filling of the dam reservoir has seen Egypt call for the United Nations Security Council’s intervention.

“[Egypt] can attempt to besmirch our country or threaten us as they’ve done in the past,” Ethiopia’s Foreign Minister Gedu Andargachew told assembled local press in Addis Ababa last week. “It won’t stop us from utilising resources in our own land.”

A US mediation effort failed to resolve the dispute, despite US President Donald Trump repeatedly expressing confidence that a deal was on the horizon.

Ethiopia failed to show up at a final round of tripartite talks in February, later accusing the Trump administration of attempting to coerce Ethiopia into making concessions in Egypt’s favour.

A recent tweet by the White House’s National Security Council urging Ethiopia to sign a deal before filling the reservoir provoked an uproar among thousands of Ethiopian Twitter users, who slammed what they called the US’s destructive role in negotiations. Egyptian farmers fear drought, and dam: 'Without the Nile there is no life'
Read More »

“It’s a conflict of interest for the US to favour a state that contributes no water to the Nile River’s tributaries and has erected structures without consulting Nile basin states to generate electricity,” said Ambachew Fekadeneh, a sustainable development engineer in Addis Ababa.

“This stance aims to keep a country at an energy poverty level of 85 percent, despite its being the source of 85 percent of the Nile.”

The Nile passes through 11 states, although Ethiopia is the source of about 85 percent of the water.

Egypt’s claim to a dominant share of the Nile’s resources is based on treaties signed in 1929 and 1959. But other Nile riparian states reject those treaties, as Ethiopia never signed them, and they were drafted in the presence of colonial Britain.

But Ethiopia enjoys warm ties with Saudi Arabia, which in 2016 sent a high-level delegation to visit the dam, though it came during what was a low point for Cairo-Riyadh ties.

International representation at the dam site has ensured members of the diplomatic community tread cautiously about taking sides.

A standoff between Egypt and Qatar over the former’s intention to militarily intervene against the Qatari backed UN recognised Libyan Government of National Accord in Tripoli, may throw in a plot twist.

The dispute has apparently escalated, according to Ethiopian state-run Fana Broadcasting Corporate, which was quick to report that Qatar had decided to retaliate by siding with Ethiopia on the GERD dispute. There’s no confirmation of this from Doha as of yet.

Away from the geopolitical frontlines, Ethiopia’s push to generate power is seen as a source of hope.

In the Amhara region’s North Wollo district, the farming community of Gebre Amba is a peaceful, lush getaway of endless greenery and mountainous landscape.

Tadesse Geremew, like others here, toils on his farm harvesting corn, teff and other crops to feed his family and sell in local markets. He says the toiling of his two young sons almost parallels with his.

“There is no power in our village,” he told Middle East Eye.

“Because of that, there are no schools here either. My children hike across meadows and mountains, before crossing a stream on foot every day to get to the nearest school. It’s exhausting and takes them about an hour.”

There are no paved roads leading to Gebre Amba. Tadesse explains that officials have promised residents for years that funding for power in Gebre Amba was forthcoming.

“I’m glad that they will start filling in two weeks,” he added. “Here, when we want to charge our mobile phones, we have to travel long distances on foot. If there is electricity here, they might build roads for public transportation.”

Ethiopia’s electricity grids serve less than half of Ethiopia’s population of 110 million, with rural parts of the country like Gebre Amba especially underdeveloped.

Ethiopian state media has in recent weeks made a concentrated effort to highlight the reality lived by millions of Ethiopians, who due to the dearth of electric power, rely on charcoal and firewood for cooking and heating.

Millions of Ethiopians remain dependent on the rains, meaning drought could lead directly to hunger and even famine.

But even good rains do not guarantee food security.

An invasion by swarms of desert locusts this year has laid waste to the harvest of millions across East Africa, with over a million in Ethiopia’s Somali and Oromia regions directly impacted.

“This is a food security issue,” Sileshi Bekele, Ethiopia’s minister of water, irrigation and energy, told the state media broadcaster in April.

“For how long are eight to ten million of our citizens going to depend on foreign aid to survive? This dispute is with a country that generates electricity for almost 100 percent of its population. Where is the justice here?”

On social media the hashtags #FillTheDam or #ItsMyDam have trended in Ethiopian circles for much of the past month.

Stoic expressions of patriotism and of an almost militant stance among some Ethiopians is on the rise, partially fuelled by open calls for military action against Ethiopia by the likes of Egyptian billionaire and telecommunications mogul Naguib Sawiris. Sawiris tweeted that if Ethiopia did not come to “reason”, Egypt “would be the first to call for war”.

Echoing his sentiment was Saudi-owned Al Arabiya channel's UN correspondent in New York, Talal al-Haj, who called on Egypt to send “a clear message to all, including Turkey and the likes of Ethiopia.”

Yet, the dam has brought a rare show of unity, even amongst opposing political forces in Ethiopia.

“The dam is a symbol of our collective aspiration to develop and take our destiny as a nation into our own hands,” he told MEE. 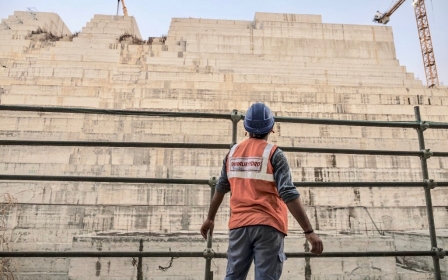