Europe calls for humanitarian truce in Libya as fighting surges Fighter with Libya's UN-recognised GNA fires rockets towards Haftar-held city of Tarhuna, southwest of the capital Tripoli, earlier this week (AFP)
By
MEE and agencies

The foreign ministers of Germany, France and Italy and the EU's top diplomat made a joint call on Saturday for a humanitarian truce in Libya, saying all sides must resume peace talks.

"We want to unite our voices to those of the UN Secretary-General Antonio Guterres and his Acting Special Representative for Libya, Stephanie Turco Williams, in their call for a humanitarian truce in Libya," the statement said, as quoted by Reuters.

"We call on all the Libyan actors to get inspired by the spirit of the Holy Ramadan, engage in resuming talks for a genuine ceasefire," said the statement, signed by the EU's Josep Borrell, France's Jean-Yves Le Drian, Italy's Luigi di Maio and Heiko Maas of Germany.

The EU is concerned that the conflict may worsen regional instability and swell the flow of migrants from the Middle East and Africa. Since the overthrow of longtime ruler Muammar Gaddafi in 2011, two competing seats of power have emerged in oil-rich Libya: militia leader Khalifa Haftar in eastern Libya - supported by Egypt and the United Arab Emirates; and the Government of National Accord (GNA) in Tripoli, which enjoys UN and international recognition and military backing from Turkey.

Forces under the command of Haftar have been laying siege to Tripoli since last April, trying to wrest the city from the GNA.

The conflict escalated sharply this month, with fierce fighting on several different fronts in the west of the country despite urgent calls from the UN and aid agencies for a truce to tackle the coronavirus crisis.

Buttressed by Turkish air power, western militias have allied with the beleaguered Tripoli government to reverse the tide and regain lost ground along the western coast.

GNA forces in recent days have attacked Tarhuna, the main western stronghold and supply line for Haftar's forces, about 72km southeast of Tripoli, according to Al Jazeera.

World leaders met in Berlin in January to set the basis for what they hoped was a fresh chance for a peace process. But the new wave of fighting has been fuelled by arms imported from abroad, the UN’s Williams has said.

The European Union has launched a new naval and air mission in the eastern Mediterranean to stop more arms reaching warring factions in Libya but cannot patrol the Egypt-Libya land border, through which artillery is still being delivered. 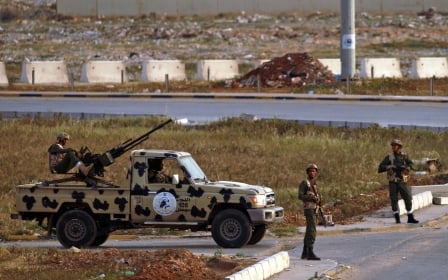