BAGHDAD - Iraqi Prime Minister Haider al-Abadi has rejected complaints from political opponents that they were not consulted before he last week named a new “technocratic” cabinet in response to anti-corruption protests and calls for political reform.

Abadi has been accused of undermining democracy and “leading a coup” against Iraq’s power-sharing political structure that has been in place since 2003, which guarantees a certain number of political positions to the country’s Shia, Sunni and Kurdish blocs.

But Abadi told Middle East Eye in a phone interview that rival political blocs had not responded to his request for them to nominate their preferred independent candidates for cabinet posts last month.

He also said that the call for an independent cabinet had come from Moqtada al-Sadr, the influential Shia cleric who last week threatened to raid Baghdad’s fortified Green Zone unless his demands for political reform were met.

"I asked to form a government of technocrats,” Abadi told MEE.

"At the beginning of last month I formally asked the (political) blocs to nominate technocrats who they think are appropriate, but the blocs did not do so," he said.

“It was Sadr who demanded a government of independents, except for the prime minister," Abadi added.

Abadi said he was committed to conducting government business in a professional manner, without interference from either his own or other political blocs.

His comments came after the leaders of other factions complained that they had not been consulted by Abadi and suggested they could still attempt to block his cabinet reshuffle which is due to be implemented by Sunday, pending parliamentary approval.

“We encouraged the prime minister to nominate professional and technocratic figures, but in consultation with the political blocs which represent the philosophy and reality of the current parliament system," Ammar al-Hakeem, the prominent Shia leader and head of the al-Mowaten bloc, said at a press conference in Baghdad on Saturday.

“The bypassing of the political blocs, by weakening them and keeping them away from the political process, could undermine the democratic system and the structures of state and government that we have built since 2003.”

A senior Shia leader familiar with current talks within the Shia blocs, speaking on condition of anonymity, told MEE that nobody had expected Abadi to bow to Sadr’s demands without considering the broader political implications.

“Abadi was very smart. He led a coup against all the political agreements that have been governing the political process in Iraq since 2003,” the leader said.

Since the overthrow of Saddam Hussein, Iraq's government has been arranged around a power-sharing deal in which control of different government ministries and departments is divided between Shia, Sunni and Kurdish factions.

The Shia bloc, who represents the biggest parliamentary bloc with more than half of the 325 seats, holds most of the senior governmental posts including the prime minister's office.

Critics say Abadi's cabinet reshuffle, if implemented, would undermine the power-sharing agreement and potentially destabilise the country. The big political blocs from all factions also see it as a threat to their interests.

“We have to be represented in his government, according to our right share and based on what our Sunni community deserves,” Ahmed al-Missari, the head of the Sunni Forces United parliamentary bloc, told MEE.

“Our share in the cabinet is 33 percent and this is what was agreed on during the last terms, so our share in this government has not to be less than this.”

The Kurdish bloc also said it would not expect to be a part of any government in which it did not hold at least 20 percent of posts.

One Kurdish member of parliament, who did not want to be named, told MEE that Nizar Saleem, a Kurdish geology professor who had been Abadi's preferred choice as minister of oil, had declined the post after being “threatened by the Kurdish leadership”.

Parliament last week voted to consider Abadi's proposed cabinet list and other reforms, which include removing political placemen from lower levels of government, over 10 days up to Sunday's deadline for the cabinet to be approved.

Yazin al-Joubori, a political analyst, told MEE that the main Shia blocs had been motivated by concerns that Sadr would follow through on his threat to raid the Green Zone, the fortified area where Iraq's governmental institutions are based.

“There was a real fear that Sadr would raid the green zone,” said Joubori. “That meant Shia-Shia fighting could have erupted, and that is a red line for all the Shia blocs, so they voted for the reforms demanded by Sadr.”

Abadi's proposals include shrinking the number of cabinet posts to 18 by merging several departments together. Most of his nominees are senior academic figures and business leaders with no previous political experience or affiliation.

Hakeem said on Saturday that al-Mowaten stood ready to cooperate with other blocs and that all options were on the table, including a possible vote of no confidence in Abadi.

“We will cooperate through the state constitution and the parliament to restore balance to the political process,” he said.

But supporters of Moqtada al-Sadr said they would not tolerate any backtracking on the political reforms approved by parliament, and said they stood ready to return to the streets if necessary.

“They know very well that they are cowards and can do nothing. Sit-ins and demonstrations could return at any moment,” Ibrahem al-Jabiri, one of Sadr's senior aides told MEE.

“They want to maintain their hateful quotas. We are aware of this and this is not possible anymore. So we will wait until the end of the decision period, then we will see what will happen.” 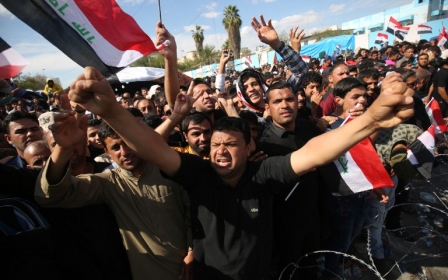 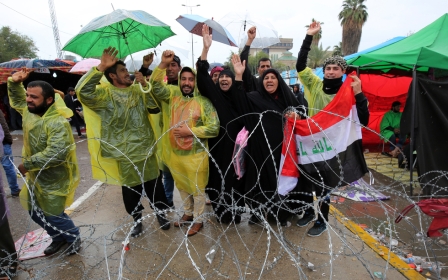