As 'significant progress' is made towards Hamas-Israel truce, Fatah official says rival is only helping US and Tel Aviv 'fulfil their scheme' Israel has offered to open all of its crossings into the Gaza Strip and give the coastal enclave access to a sea passage to Cyprus in exchange for the halting of all kinds of attacks from the Palestinian territory, a senior Hamas official tells Middle East Eye.

If secured, the Egyptian-brokered deal would serve as an enormous relief to Gaza and the Hamas movement that runs it.

However, in the West Bank's Ramallah, the Fatah chairman in charge of reconciling his party with Hamas warned that the movement is engaging in a "hostile scheme" that will break Palestinian unity.

"By negotiating with Israel over a ceasefire and truce in Gaza and for separate arrangements for Gaza, Hamas is engaging itself in the hostile scheme meant to separate Gaza from the internationally recognised state of Palestine on the 1967 line," Azzam al-Ahmad, Fatah official in charge of reconciliation, told MEE on Thursday.

By negotiating with Israel over a ceasefire and truce in Gaza and for separate arrangements for Gaza, Hamas is engaging itself in the hostile scheme

Details of the agreement come as the Hamas source said the movement and Israel have made "significant progress" towards a long-term truce, as Egyptian-mediated negotiations, widely thought to be part of the United States's "deal of the century" for Mideast peace, continue.

According to the source, Israel has dropped its historic demands, including that Hamas disarm, stop digging tunnels and release Israelis who are captive or missing in Gaza. Meanwhile, Hamas has pushed for humanitarian projects in Gaza, including those involving water, electricity and sewage.

But so far, he said, the biggest obstacle in the negotiations has been the timing over when Hamas would be given access to the sea passage, which would run from Gaza to Cyprus. Other logistical details for the sea passage had been worked out, he suggested.

"We agreed to have this passage under [Palestinian Authority] control like the Rafah crossing, and under international scrutiny," the source said.

Israel, he said, wants to wait until after the two sides swap prisoners to open the passage, but Hamas has insisted that it must have access to it first to help relieve the urgent humanitarian situation in Gaza, which has been under siege for 11 years.

An Israeli official told Haaretz that there have been discussions around a sea pier, but that there was "no consensus" on that in Israel.

"Only to the extent that the quiet is maintained for an extended period will Israel agree to discuss the humanitarian projects that depend upon Israel, on the condition that negotiations are also undertaken to return [the bodies of Israeli soldiers being held in Gaza and two Israeli civilians being held there]," the official was quoted as saying in a report on Friday.

'Hamas is just one faction'

Speculation has been rife in recent days that an announcement of a final deal could be imminent. As six-point plans and other details leaked into the region's newspapers, Egyptian spy chief Abbas Kamil shuttled between Tel Aviv and Ramallah, without seeing Palestinian President Mahmoud Abbas, who was reportedly otherwise engaged.

Senior officials in Hamas, Islamic Jihad and other Gaza-based groups crossed into Egypt late on Thursday, heading for Cairo.

According to multiple reports, talks continue and a final announcement is not expected until sometime after the Eid holiday, which will conclude next Friday.

Missing from the picture has been the Fatah leadership, who are reportedly expected to join the talks in Cairo later this week or next week, Reuters reported.

Ahmad, the Fatah official in charge of reconciliation, said Hamas' continued involvement in the talks without his party or the Palestinian Liberation Organisation (PLO) is only helping Israel and the US.

"It's no secret that Israel and the USA are working on creating a [mini] state in Gaza and taking most of the West Bank," he said. "Hamas is helping them fulfil their scheme."

Israeli journalist Meron Rapoport told MEE that in recent days his sources have concluded that Hamas has created a deterrence that has forced concessions from Israel through its military tactics.

"Everyone remembers how the clashes [in 2014] disabled the airport in Tel Aviv, and this is something that [Prime Minister] Benjamin Netanyahu is not interested in, for sure not in a election year," Rapoport said.

"Israel's top priority is to isolate Gaza and to create a dependent body called Gaza, which is completely dependent on Egypt."

On Friday, as leaks and details continued to appear in the media, many Israeli eyes were on Gaza to see what would happen at a protest scheduled for Friday at the strip's frontier with Israel.

Since 30 March, thousands of Palestinians have protested each Friday at the fence separating Gaza from Israel, an unprecedented outcry dubbed "the Great March of Return".

Israeli forces have killed at least 169 Palestinians - the majority of them unarmed demonstrators - in Gaza in the span of four-and-a-half months, while one Israeli soldier has been killed by a Palestinian sniper.

Israeli air strikes and Palestinian rockets in recent weeks have raised fears that the situation might devolve into an all-out war.

But since last week, there has been silence between the two sides. The Israel Today newspaper suggested on Friday morning that what happened at the protest later that day would be a test for Hamas.

"If it will be silent in the next few days, then the talks will continue and they will be able to speak about something more serious, which will solve basic problems in Gaza, which are energy, water and also salaries," the newspaper wrote. 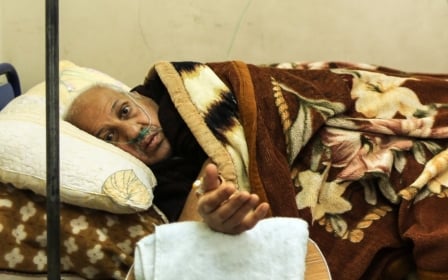