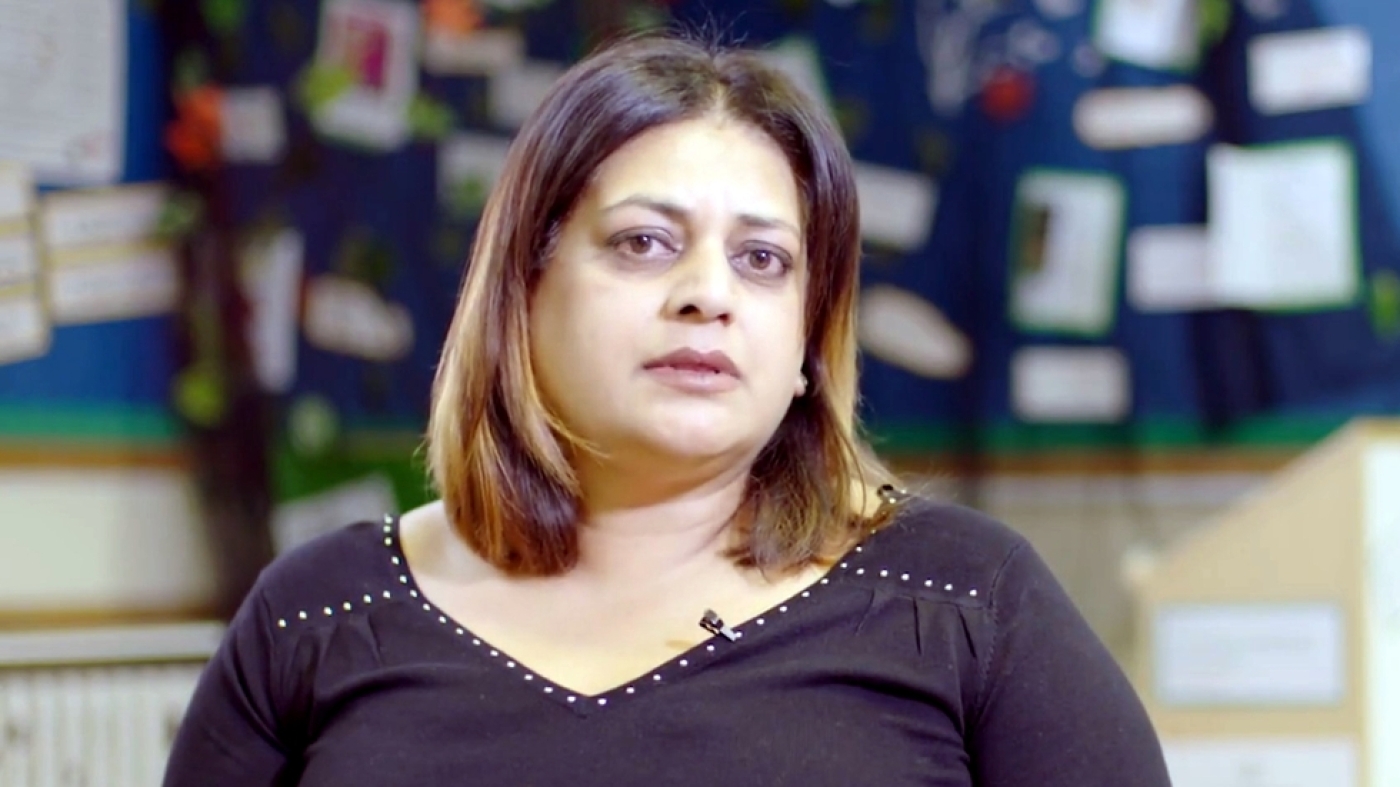 The headteacher at a London primary school that was forced to back down from a ban on Islamic headscarves has accused the Sunday Times newspaper of "twisting" her words to stir up controversy around the issue, according to a recording obtained by Middle East Eye.

The Sunday Times reported in January that St Stephen’s School in Newham, a borough with one of the highest Muslim populations in the country, had banned the hijab for girls aged under eight, a move strongly opposed by parents and eventually overturned.

But headteacher Neena Lall has since denounced the report and said that she was misled into believing the paper was interested in reporting on the east London school’s strong academic record after it named it “primary school of the year” in a report in November.

“The article which came out in the Sunday Times was completely misleading. Some of the things that happened in that article were not things that have happened at this school and it just inflamed the situation,” Lall told parents at a meeting on 22 January in which she also described the decision to ban the hijab as a “huge error in judgment”.

Deputy head Adam Bennett also delivers a damning assessment of the Sunday Times's story, suggesting the paper had set out to create a “big debate” around the issue of the hijab.

“They took a lot of footage, they chopped it up, they used it how they wanted, they had their agenda and they put stuff forward to create this big debate and unfortunately our school was left in the middle of this debate,” he said.

Lall also said in the recording that Arif Qawi, the chairman of governors at St Stephen’s who had championed the ban, was forced to resign over an email he had sent in which he described a local imam as “an unholy bastard” and mistakenly copied in the imam himself.

The admission about Qawi's departure goes against speculation that his resignation was due to a disagreement about the hijab ban climbdown.

However, Qawi told Middle East Eye that he had not resigned because of the email, but had agreed to quit because he and other school leaders had been subjected to a "highly orchestrated abuse and intimidation campaign from Islamic extremists" following the publication of the Sunday Times "hijab ban" story.

The hijab row centres on a Sunday Times video report on 14 January in which Lall said she was concerned about her children’s lack of identity with Britain.

Lall also said in the video she decided to ban the hijab for under eights after consulting with staff and that part of the reason was that it “hindered movement”.

“We were finding that some of our children were coming into nursery and reception wearing a headscarf. We then had a bit of a discussion, we spoke to the leadership team and I spoke to the governors as well and we felt that it was not an appropriate place for the children to have the headscarf in key stage one.”

Days later the school was forced to reverse the policy after a strong reaction from parents. Amanda Spielman, the UK’s chief schools inspector, and Muslim community groups also intervened.

The controversy sits in stark contrast to the glowing praise the school received on 19 November, when the Sunday Times hailed it as the “state primary school of the year” because of its strong academic results.

In that article the paper claimed that St Stephen's was outperforming every other school in the UK in key government assessments - despite the fact, it said, that 96 percent of its children did not speak English as a first language.

The school also added a page to its website where parents could buy copies of photos taken by the newspaper's photographer of some of its students.

“Everything we do here comes from our vision that every St Stephen’s child blossoms into a confident, respectful, modern British citizen prepared to be an aspirational contributor in the global community,” Lall was quoted as saying.

However, Lall was also quoted about the school's hijab ban policy in a news article in the paper on the same day. That report focused on plans, announced by Spielman, for school inspectors to question primary school children who wore hijabs.

“There is no requirement for girls to wear the hijab until puberty. It is not appropriate in a primary school,” Lall was quoted as saying.

But the events leading up to the Sunday Times' subsequent report and the lengths the school has gone to assuage dismayed parents are revealed in a recording of a frank meeting between senior staff members and more than 100 parents.

During the meeting, Lall explained to parents how the Sunday Times had first approached the school in November.

Lall said the journalist had been “very insistent”, and the headteacher agreed to do another interview about the issue at a later date.

“I thought she would go away, silly me. I've seen the true picture of journalists in the past week I have to say. At that time I felt I had to honour my word and that is why I did that interview before Christmas,” she said.

The original Sunday Times story about the school's academic success carried the byline of Judith O’Reilly, while the subsequent “hijab ban” story and the November story about inspectors questioning schoolgirls were written by Sian Griffiths, the newspaper's education editor, and Iram Ramzan. Griffiths is believed to have visited the school in December.

Lall said the video report “was taken from hours of footage of us speaking which was condensed to three minutes surrounding the hijab”.

Responding to the concerns of parents, Lall also denied linking the school's headscarf ban to concerns about integration.

“I have never connected the two and if you watch the video again there is no connection between the two. People have linked it to stir things up but I never linked the two,” she said.

“They are not my words, it was twisted by the press and it was misinterpreted.”

Lall can also be heard apologising to parents for the headscarf ban.

Georgia Dawson, one of the school's assistant headteachers, then told the parents that the headscarf ban had been introduced for the youngest children at the school because of curriculum changes which meant that they were spending more time outdoors and in a “fluid environment”.

“Our aim is to create the most active curriculum for our children,” said Dawson. “We were having a uniform policy update and alongside that we said let's have a look at the uniform for our younger children.

“We thought about our PE [physical education] policy and it simply stated that no hats, scarves or ear rings should be worn and that hair should be tied back. We felt for our youngest learners, who were going to be outside for such a long time, that it made sense to align those policies.”

The Sunday Times came under fire and was forced to make a correction at the end of 2016 after claiming in another article carrying Griffiths's byline that “some Muslims lead such separate lives that they believe Britain is an Islamic country where the majority of people share their faith”.

More recently, a report in its sister paper, the Times - which is also owned by Rupert Murdoch’s News UK group - about a Muslim foster family was derided for its inaccuracies.

A Muslim Council of Britain spokesperson told Middle East Eye: "It is deeply disappointing that the Sunday Times appears to have deliberately misrepresented the views of staff members at St Stephen's school.

"This obsessive focus on the hijab has led to the publishing of a series of misleading stories that have once again stigmatised Muslim communities. The damage this has done to community relationships, and the trust between parents and the school, is incredibly serious."

The recording also sheds new light on the resignation of Qawi, the former chair of governors at the school, who supported the hijab ban and who claimed last year in a Facebook post that he was on a “personal crusade to severely limit the Islamisation process” at St Stephen’s.

In the recording, Lall told parents that Qawi had resigned because he used “inappropriate language in a communication”.

An email exchange seen by MEE shows that Qawi used inflammatory language in response to a terse email he was copied into that was sent from Lall to a local imam involved in running an after-school madrassah at a local mosque for some of the children.

Lall accused the imam of telling children that they would be punished or expelled from the madrassah if they attended a school trip to an outdoor education centre that she had arranged.

I will put an end to this disgusting mullah menace permanently

Qawi then responded in an email intended only for Lall but which was also sent to the imam, writing: “Not strong enough...crucify the unholy bastard!”

He then urges Lall to report the imam to the local authority and the Department for Education.

“I know neither of the authorities have the balls to do the right thing. However, together with the three of you [Lall and the school's deputy headteachers], I will put an end to this disgusting mullah menace permanently,” he writes.

“You want rights respecting and safeguarding...well, this is how we do it properly and effectively. The children must be protected against these religious imposters at all costs. If the community is too scared and weak, I'll take the flak.

“You are free to drop my name in any communication to deflect the religious nonsense towards me.”

Lall said in the recording that the email, which was sent in mid-December, had initially been blocked by the school’s firewall because of its inappropriate language. She said she only learnt of it later after the imam complained, after which an investigation was launched.

“I want to say very clearly that the school and myself have cut all ties with Mr Qawi,” Lall can be heard saying, adding that she had been “shocked and quite disgusted to discover some of the disrespectful comments” that he had made. “His outspoken email and Facebook communication is not representative of the views here at the school.”

But Qawi told MEE the email had not been the reason for his resignation. He said he had apologised to the imam shortly after the email was sent and the school had considered the matter closed at that stage.

He also said that the original reason for restricting the wearing of the hijab for younger girls at the school was for "purely health and safety reasons" because of concerns that "the loose cloth can get caught up in the outdoor activity equipment".

"The Sunday Times ran a very poor article on 14th January that completely misrepresented the reason for the hijab restriction. This led to a highly orchestrated abuse and intimidation campaign from Islamic extremists against Neena Lall and myself personally," Qawi wrote in an email.

"The intimidation and manipulation of parents from across the country led to the school asking for my resignation on the afternoon of January 19th. And purely to stop the abuse and threats to the school community, I agreed to resign."

The Sunday Times told MEE that it stood by its story.

- Areeb Ullah contributed to this story.