French President Emmanuel Macron, pictured here during a videoconference on 17 November 2020, has taken a strong-handed approach to Islam (AFP)
By
MEE staff

French President Emmanuel Macron has given the French Council of Muslim Worship (CFCM) two weeks to draw up a charter of “republican values” its member organisations and affiliates will be expected to comply with, amid a row over Islam's place in the country.

In the wake of deadly attacks and in a stated attempt to tackle "extremism", Macron is making efforts to centralise the formation and accreditation of Muslim religious leaders in the country. His plans have been criticised by some in the Muslim community in France and abroad.

During a meeting on Wednesday evening with a number of French Muslim leaders, including CFCM president Mohammed Moussaoui and Chems-Eddine Hafiz, the rector of the Mosque of Paris, Macron tasked the national Muslim body with filing a draft of the charter.

“This is historic,” a statement from the presidency quoted by French media read. “This has been in discussion for decades.”

At the president’s request, the new charter must include recognition of the “values of the Republic”, specify that Islam in France is a religion and not a political movement, and put an end to foreign involvement in French mosques.

According to AFP, Macron called on some Muslim federations in the country to “do away with ambiguities”.

“I put my trust in you and you are beholden to my trust,” Macron told the CFCM members on Wednesday. “If some do not sign this charter, we will draw the consequences from that.”

Macron was reportedly presented with a proposal from the CFCM for the creation of a National Council of Imams, which would reportedly create a plan within six months to accredit imams in the country, according to a statement from the Elysee Palace.

Created in 2003 under then-interior minister Nicolas Sarkozy, the CFCM is a federation of Muslim religious organisations in France. While it has become the principal interlocutor of the government with regards to issues of organised Islam in France, it does not officially seek to represent French Muslims.

Unlike religions such as Catholicism or the Greek Orthodox Church, Islam does not have centralised leadership, which will likely complicate French efforts to consolidate training and accreditation of religious community leaders.

While the degree of qualifications expected from imams may vary from one country or area to another, in practice sufficiently knowledgeable individuals can lead prayers and religious rites without formal training.

The planned National Council of Imams would reportedly require different levels of qualifications - including fluency in French and university degrees - depending on whether one leads prayers, gives sermons or engages in public speaking.

It remains unclear what exact consequences will face imams and organisations that do not abide by the future charter. However, AFP reported that under the planned national council, imams would receive a type of accreditation card that could be granted or rescinded based on their adhesion to the charter.

In early October, Macron sparked controversy during a speech in which he called Islam “a religion in crisis” and vowed to crack down on alleged Muslim “separatism”.

Paris’s plans have since intensified following the killing of a schoolteacher and an attack in the city of Nice that left three dead that same month.

A draft law on “separatism” is expected to be presented to the cabinet on 9 December.

Macron has indicated that he aims for the estimated 300 imams from countries such as Turkey, Morocco and Algeria currently working in France to leave the country within four years.

Tensions over "political Islam", extremism and free speech have spread beyond France's borders in recent months.

Samuel Paty, the schoolteacher beheaded in October, was killed by an 18-year-old Muslim refugee of Chechen origin after showing pupils a cartoon of the Prophet Muhammad in a lesson on freedom of speech.

The government's subsequent defence of those cartoons prompted Turkish President Recep Tayyip Erdogan, with whom Macron is in disagreement over several issues, to call for a boycott of French goods.

Meanwhile, some advocates in France worry that the country’s decades-long focus on Islam leads to a conflation between Muslims and violent extremism, while failing to stop - or exacerbating - the latter.

They say it fosters discrimination and Islamophobia, and misuses and misinterprets the French conception of secularism - laicite. 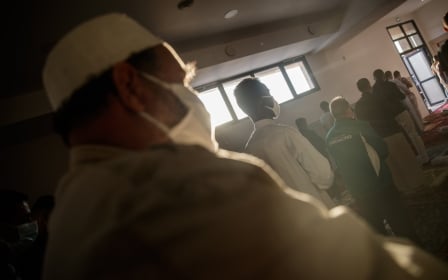