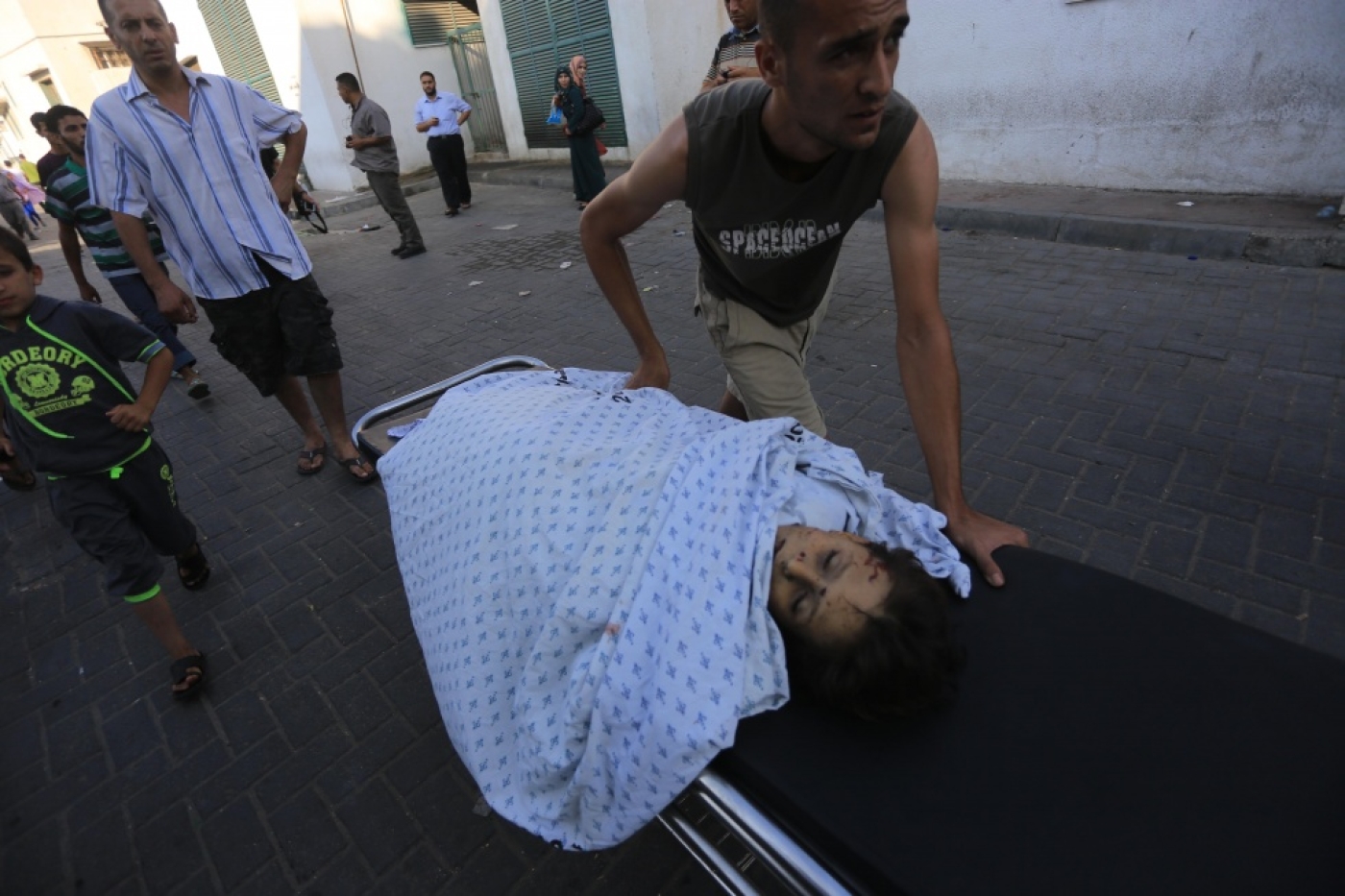 A Palestinian child killed during an Israeli strike on Gaza on July 28, 2014 (MEE/Mohammed Asad)
By
MEE and agencies

More than 100 Palestinian corpses were brought to Gaza morgues on Tuesday after intense Israeli fire, as talk of ceasefire efforts fail to materialise.

Hamas' armed wing, the Ezzedine al-Qassam Brigades, said Tuesday that a truce with Israel must include a stop to Israeli "aggression" and lifting of its Gaza blockade.

"There is no ceasefire without the stop of the aggression and the end of the siege," Mohammed Deif said in an audio address carried by Hamas radio and television.

Israel stepped up its artillery fire overnight, especially in central Gaza's Bureij refugee camp, spreading in the afternoon to Jabaliya in the north and Rafah in the south.

Two Palestinians brought to a Jerusalem hospital for treatment died of their injuries, and the Israeli army said troops killed five militants in a Gaza tunnel.

Since the Israeli offensive began on July 8, 1,191 have been killed in Gaza, emergency services spokesman Ashraf al-Qudra said, while another 7,000 have been injured.

Most of the dead were civilians, according to the United Nations.

Fifty-six lives have been lost on the Israeli side, including 53 soldiers, two Israeli civilians and a Thai agricultural worker killed in southern Israel.

Gaza truce offers fly, but so do shells

But the Israeli government remained silent on the subject while continuing its bombardment, leaving scores more dead.

US Secretary of State John Kerry said that Israeli Prime Minister Benjamin Netanyahu had asked for fresh help from America in trying to broker a ceasefire.

"Last night we talked, and the prime minister talked to me about an idea and a possibility of a ceasefire. He raised it with me, as he has consistently," said Kerry.

The top US diplomat added that Netanyahu had said he "would embrace a ceasefire that permits Israel to protect itself against (Palestinian) tunnels and obviously not be disadvantaged for the great sacrifice they have made thus far."

Yasser Abed Rabbo, secretary general of the Palestine Liberation Organisation, said after consultations with Hamas and Islamic Jihad, the two main militant groups in Gaza, that there was "willingness for a ceasefire and humanitarian truce for 24 hours".

A joint delegation headed by Palestinian president Mahmud Abbas would travel to Cairo to take the next step, he added.

"This is more proof that we have a unified Palestinian stand," Abed Rabbo told reporters. "The delegation will head to Cairo under the PLO umbrella represented by president Mahmud Abbas."

Hamas said so far it had not agreed to any new truce and was waiting for Israel to show its hand first.

"When we have an Israeli commitment... on a humanitarian truce, we will look into it but we will never declare a truce from our side while the occupation keeps killing our children," Hamas spokesman Sami Abu Zukhri said on his Facebook page.

A series of ceasefires in recent days have failed to take hold, as both sides appeared more determined than ever to keep up the fighting.

On Monday night, a deluge of bombs rained down on Gaza, after an uneasy truce to mark the end of the Muslim fasting month of Ramadan and the Eid al-Fitr holiday.

The raids came after Israel announced that five of its soldiers were killed in an ambush late Monday after fighters sneaked into southern Israel by a tunnel.

On the same day, mortar fire killed four Israeli soldiers near a southern kibbutz, the army said, while another soldier had been killed in action in southern Gaza.

1 in 8 Gazans have fled their homes

The World Health Organisation now estimates that more than 215,000 people, or one Gazan in every eight, have fled their homes in the overcrowded territory.

Many have headed for already-cramped UN schools in the north, where children ran barefoot around a dirty school yard alongside stinking piles of rubbish.

The surge in violence drew increasingly urgent international demands for an end to hostilities.

"In the name of humanity, the violence must stop," UN chief Ban Ki-moon said on Monday.

But the calls went unheeded, with Netanyahu warning it would be "a lengthy campaign" that would go on until troops destroyed cross-border tunnels used for staging attacks on Israel.

"Israeli citizens cannot live with the threat from rockets and from death tunnels -- death from above and from below," he said.

Tensions had risen sharply after a shell on Monday landed inside the Shifa hospital compound in Gaza City, followed by a blast at a children's playground in the city's Shati refugee camp, that killed 10, eight of them children.

"We have not fired on the hospital or on Shati refugee camp," Major Arye Shalicar told AFP, saying the army had footage showing militants firing at Israel but the missiles falling short inside Gaza. Gaza Under Attack
Documenting death: the man who counts the bodies in Gaza