A quarter of the diseases spread in Gaza are caused by water pollution, data shows, while residents and farmers avoid water from tap or wells to stay healthy 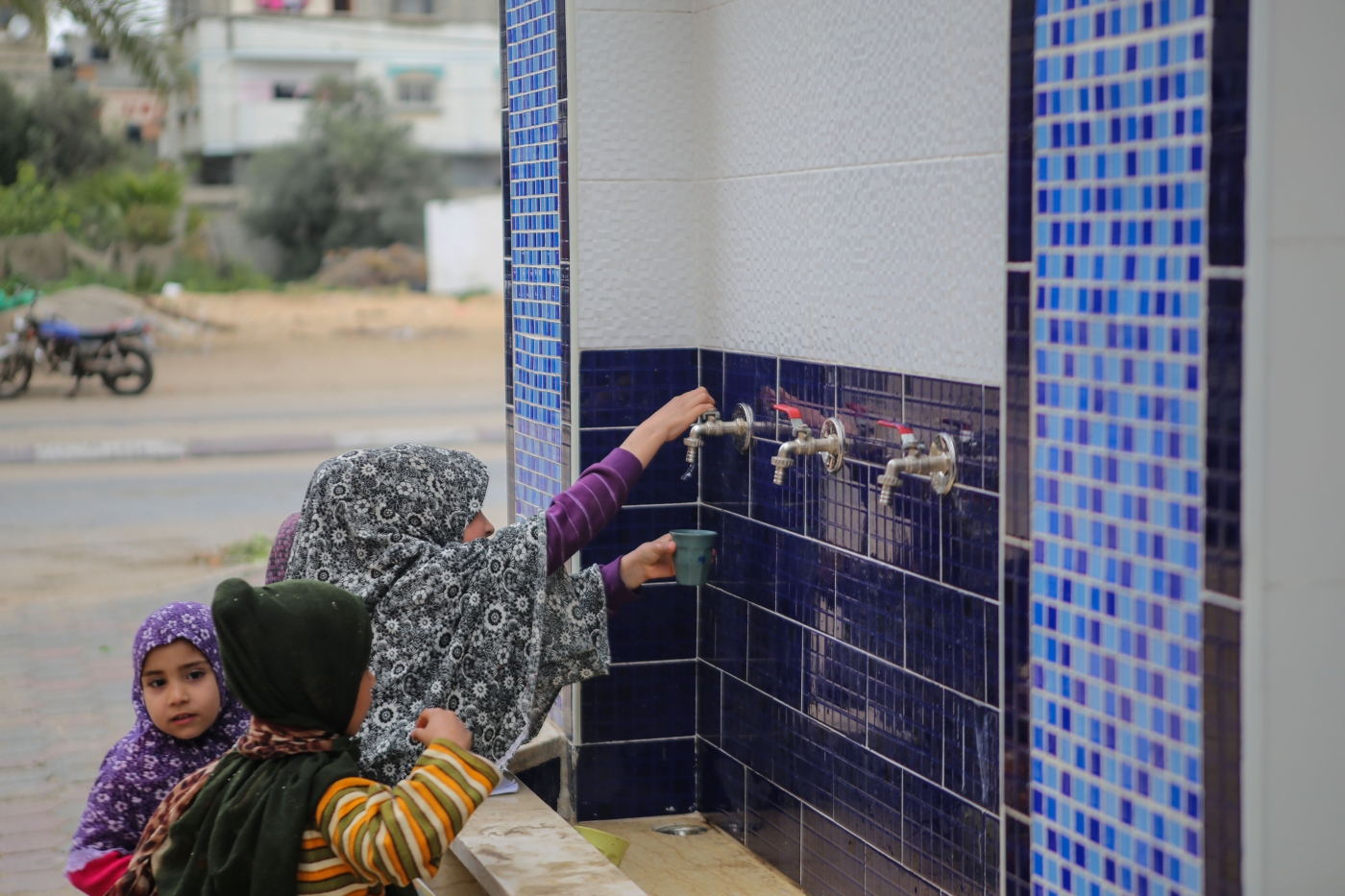 For years, Iyad Shallouf, a farmer who owns a piece of land near the Gaza seashore, used to fill tanks with freshwater for people’s use in his neighbourhood. Today he can barely buy his own water to irrigate the crops.

With the exacerbating water problem in Gaza, farmers, especially those in the western areas of the blockaded Strip, face the brunt of the water pollution crisis due to their lands’ proximity to the contaminated seawater.

Instead of using water wells for irrigation, they have to buy water several times a month in order to avoid damage to their crops.

“Here in the al-Mawassi area [adjacent to the sea], we endure a suffering that only God knows. Our crops get damaged by the contaminated saline water, so we now avoid using the regular ways of irrigation and instead buy water to irrigate the crops,” Shallouf, 45, from Rafah in the southern Gaza Strip, told Middle East Eye.

“I already have a water well which would have saved me a lot of money if used for irrigation, but the elevated chlorine concentration and salinity levels have rendered the well useless. We cannot even use it for bathing because the water would damage our skin.”

Shallouf said he had tried to grow several types of crops in the past, but always ended up incurring huge losses due to the damage caused by poor quality water.

The long-term Israeli blockade has caused a "serious deterioration" of water quality in Gaza, making 97 percent of the water contaminated, according to the Geneva-based Euro-Med Human Rights Monitor.

The situation is compounded by an acute electricity crisis that stymies the operation of water wells and sewage treatment plants, leading to about 80 percent of Gaza’s untreated sewage to be discharged into the sea while 20 percent seeps into underground water, the NGO said.

It added that recent data shows about a quarter of the diseases spread in Gaza are caused by water pollution, and 12 percent of the deaths of young children and infants are linked to intestinal diseases related to contaminated water.

“A civilian population caged in a toxic slum from birth to death are forced to witness the slow poisoning of their children and loved ones by the water they drink and likely the soil in which they harvest, endlessly, with no change in sight,” Muhammed Shehada, the group’s chief of programmes and communications, said in an oral statement made at the 48th session of the United Nations Human Rights Council (UNHRC) earlier this month.

As a result of the water pollution, farmers and landowners in most areas of the coastal enclave have to pay about two Israeli shekels (around $0.60) for each 1,000-litre-tank used for irrigation.

“We use huge amounts of water for the crops, the 1,000-litre tank is nothing. If we have to pay two shekels for every tank, the whole process sometimes becomes unworthy of the efforts,” Shallouf said.

Shallouf spends around $1,000 a month to buy water and to fill artificial water ponds in his land for irrigation. Sometimes, the high costs of water and fertilisers, combined with the shortage of fuel and electricity used to pump the water, lead to heavy losses for farmers.

“Today, our decision as farmers to plant certain type of crops is completely linked to the availability of water. For example, you probably won’t see farmers growing cucumbers or strawberries in these areas, because these types of crops require large amounts of fresh water. So instead we grow green peppers and other crops that don’t require much water.”

In the area where Shallouf’s farm is located, vast areas of agricultural lands have been turned into residential areas because of the water shortage.

“Many farmers thought it was not worth it to continue growing crops that would eventually get damaged by contaminated water or by the lack of fresh water, so they just sold their lands or built residential homes and apartments on them instead.”

The water crisis has been steadily worsening since the beginning of the Israeli blockade, and reached its peak in 2020.

In 2020, the United Nations Children’s Fund (UNICEF) estimated that only 10 percent of the population of the blockaded enclave had direct access to clean and safe drinking water, while more than one million residents - around half of the population - lacked water and sanitation interventions.

Water with high saline levels in several areas across the Strip forces hundreds of thousands of households to buy water for drinking and bathing.

While the seawater has a salinity of roughly 30,000 parts per million (ppm), domestic water in some areas in Gaza reaches up to a third this number.

This is equivalent to 10 grams of salt per one litre of water, a level considered very high, according to Ahmed Safi, a Palestinian expert in water and environmental sciences.

“Much of the water in Gaza, including drinking water, is contaminated by nitrates, in addition to salt and high levels of chlorine, which causes residents multiple diseases. In some areas, you cannot even use the water for bathing,” he said.

“The main reason for the water crisis in Gaza is the overuse of groundwater caused by the population increase due to many factors, starting from the influx of hundreds of thousands of refugees during the Palestinian Nakba back in 1948.”

More than 2.1 million people live in the coastal enclave, covering a total area of 360 square kilometres, making the blockaded Strip one of the most densely populated areas on earth.

Around 70 percent of the population are refugees who were forced to leave their hometowns and villages in other parts of the occupied Palestinian territories upon the creation of Israel.

“The treatment of wastewater is another complicated problem. For years, sewage systems depended on pits in the ground that collected wastewater, eventually seeping into groundwater and contaminating it with nitrates. This system is still being used in some areas until now,” Safi added.

As a result, there has been a 13-14 percent increase in the number of kidney failure patients every year in the Strip, according to Dr Abdullah al-Qishawi, head of the dialysis department at Gaza City’s al-Shifa Hospital.

“We currently have 1,000 patients who come to the dialysis department three times a week. Of those cases, at least 20 percent are caused by water contamination,” he told MEE.

“Here in the dialysis department, you will notice that most patients come from areas adjacent to the borders, where the water crisis remains at its peak.”

Qishawi said that although there are no specialised studies in Gaza that address the relation between the rising number of kidney failure cases and water contamination in the Strip, doctors can assume that contaminated water is the cause for kidney problems.

“Kidney failure is usually caused by other diseases like diabetes, high blood pressure or renal calculi. However, a large number of people diagnosed with kidney failure in Gaza do not suffer any of these diseases, which is an indication that it is caused by the water that is unfit for human consumption,” he explained.

The electricity supply in Gaza remains highly dependent on the political situation. During tensions between Israeli and Palestinian armed groups, the Israeli authorities usually suspend fuel shipments and close the Kerem Shalom crossing at the junction of Gaza–Israel, forcing the Strip’s sole power plant to shut down.

During these long hours of power cuts, the functionality of the Strip’s infrastructure is severely affected, and generators that pump clean water from wells into homes would stop working, essentially cutting off water resources for a large portion of the local population.

“Our daily schedule depends on the availability of electricity and water. If we have electricity, that means that we have water to bathe, cook, wash the dishes, clean, and drink. If there is no electricity for several hours, our life simply stops,” Areej Muhammed, a 29-year-old mother from west of Gaza, told MEE.

“During the time when electricity and water are shut off, we just sit there waiting for it to come back. We reschedule all our tasks and daily routine according to the schedule of water and electricity,” she added.

A report of a field assessment of health conditions in the occupied Palestinian territory released by the World Health Organisation (WHO) in 2016 revealed that over one quarter of illnesses in the Gaza Strip are related to the pollution of water, which is also a primary cause of child morbidity.

In 2017, the European Union and Unicef funded a €10m seawater desalination plant in Gaza to improve access to drinking water for thousands of residents. But with the ongoing power crisis, the plant cannot work at full capacity.

However, due to fuel shortages, treatment plants that process wastewater work at a reduced capacity, forcing the water authority to dump contaminated and partially treated sewage water into the sea.

In the Israeli military’s successive attacks on the Gaza Strip since 2008, Israeli forces have targeted the water, sanitation and hygiene (WASH) infrastructure multiple times, including areas containing water wells and pipelines, sanitation facilities, as well as municipality buildings operating sanitation and sewage services.

In its latest attack in May, Israel launched an 11-day-military operation on the Strip, directly targeting vital civilian infrastructure, and resulting in long-term damage.

A Rapid Damage and Needs Assessment conducted by the World Bank in the aftermath of the attack revealed that the Strip has incurred up to $380m in physical damage and $190m in economic losses, directly affecting the residents’ right to access safe water.

Before the attack in May, the average daily consumption of water in Gaza per capita was around 88 litres, which was between the WHO’s recommendation of 50-100 litres required per person per day to ensure that the most basic needs are met and few health concerns arise.

In the aftermath of the attack, Oxfam reported that 400,000 people in Gaza did not have access to a water supply as a result of the severe destruction in infrastructure.

Today, hundreds of thousands of Gaza residents have to buy water from private desalination plants.

“About two years ago, my youngest son suffered from severe diarrohea and abdominal pain, and it turned out it was due the consumption of domestic tap water. After that day, I started buying water from trucks,” Abu Sameh Omar, 40, a resident of central Gaza city, told MEE.

“We usually can afford (to buy) the minimum amount of drinking water each month. It is more expensive than the water we receive at home, but that option is undrinkable.”

“What I cannot afford is to allow my children to drink that water and fall ill.” 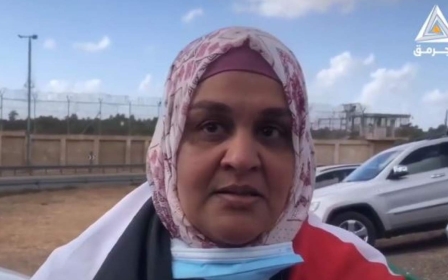 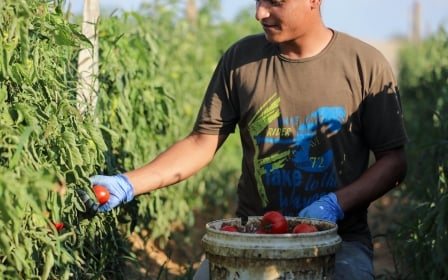