Israel said late on Sunday it was lifting a ban imposed last month on private imports of cement to the Hamas-run Gaza Strip.

More than 1.2 million tonnes of construction materials have entered Gaza since the mechanism was set up in 2014, much of it for war reconstruction. According to an Israeli official, 80 truckloads of cement enter Gaza weekly, each carrying 40 tonnes.

The ban was imposed in early April, with Israel accusing Imad al-Baz, deputy director of the Hamas economy ministry, of diverting supplies.

"In accordance with the security assessment and the understandings reached with the international community, as of today Sunday May 22 the re-entry of cement into Gaza has been approved," said a statement from the government body responsible for implementing policies in the Palestinian territories, COGAT.

"The exploitation by Hamas is a severe violation of the construction mechanism and the agreement between COGAT, the Palestinian Authority and the United Nations," said Sunday's English-language statement, in response to an AFP query.

Al-Baz has denied the allegation, saying that the imports were conducted in line with a UN-brokered Gaza Reconstruction Mechanism, aimed at allowing for reconstruction after a devastating 2014 war with Israel.

Israel has imposed a blockade on Gaza since 2006. Palestinian fighters in Gaza and Israel have fought three wars since 2008.

In recent months, Hamas has been accused of rebuilding tunnels destroyed in 2014 that could be used to attack Israel. Hamas officials say any such tunnels would be defensive in nature. 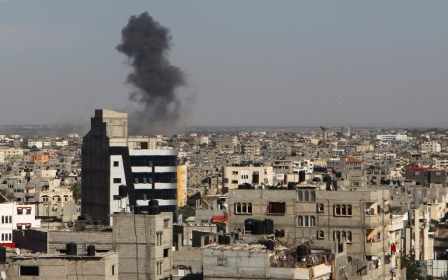