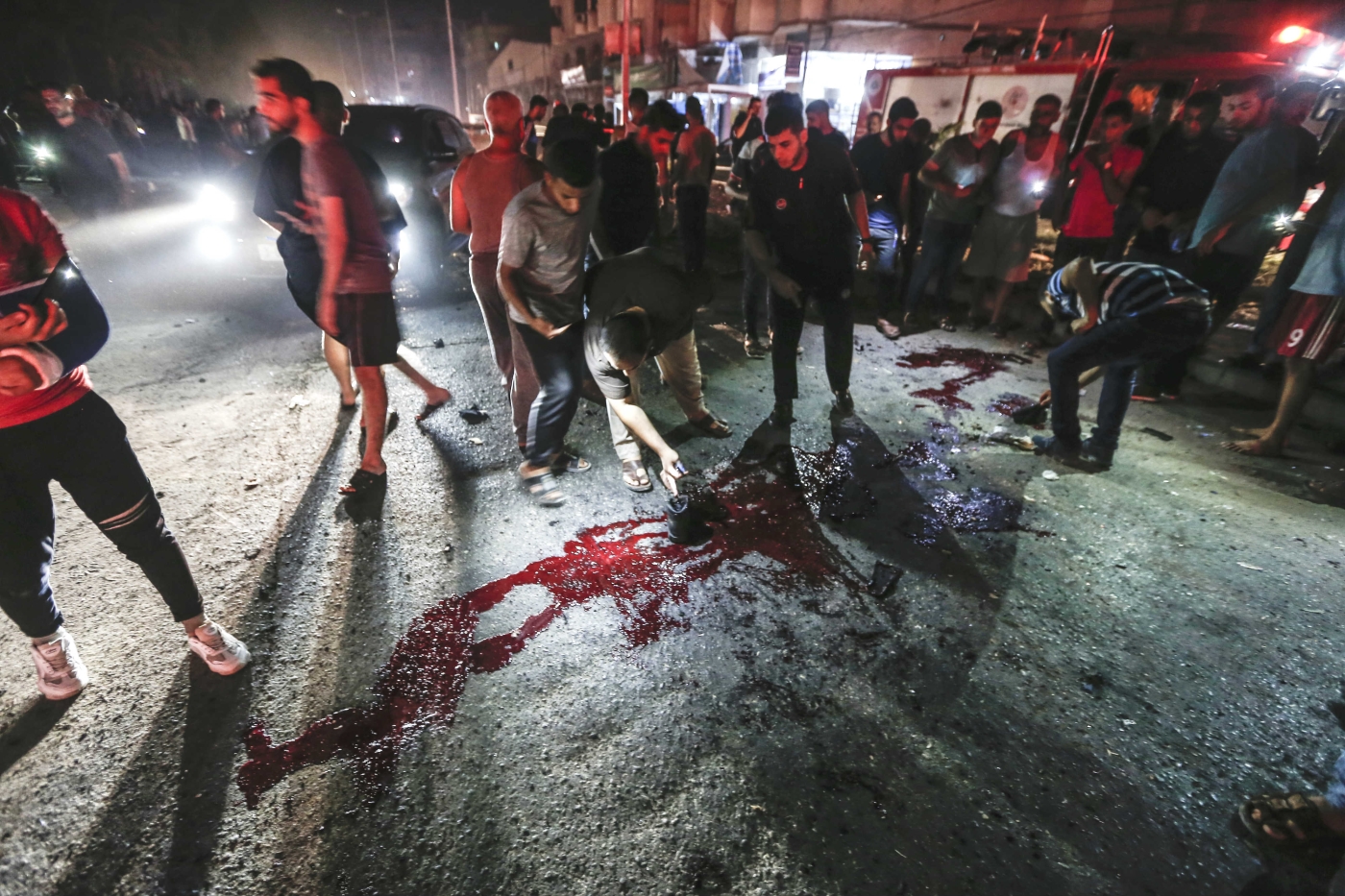 A state of emergency was declared throughout Gaza following Tuesday's attacks (AFP)
By
Adam Khalil
in
Gaza City, Gaza

Ever since it became the de facto ruling party in the besieged Gaza Strip following 2006 legislative elections that led to a split with the Fatah-led Palestinian Authority (PA), Hamas has faced countless issues in its governance of the coastal Palestinian enclave - not least of which the 12-year Israeli blockade, which has created severe economic problems and a humanitarian crisis.

Around two million Palestinians live in the tiny besieged enclave, more than half of them suffering from poverty and unemployment and dependent on humanitarian aid provided by international and local institutions. While many Palestinians with the means to leave Gaza have found a way to escape the worsening situation, those trapped in ever-deteriorating conditions have found themselves with limited options to make ends meet.

For some, the double suicide bombing reflects growing resentment and rising anger against Hamas within the Gaza Strip, not only within the general population but among militant Salafi groups.

A number of former Hamas members have left the group over the years for various reasons; some of them joined other militant groups reportedly due to a feeling of "marginalisation" within the movement, or out of disagreement with the group's policies, notably Hamas's truce agreements with Israel over the years to de-escalate violence.

Although Hamas has not explicitly accused militant Salafi groups of being involved in the recent bombings, it immediately launched a campaign of mass arrests among its members.

Palestinian journalist Hassan Jabr says the dispute between Hamas and Salafi groups started long before the former took over in Gaza.

When Hamas chose to participate in the 2006 Palestinian legislative elections and integrate the Palestinian political system, the decision contradicted Salafi beliefs that man-made law should not be put above God's law.

Hamas, which won 74 seats of the 132 seats against the Fatah party's 45, took complete control of the Gaza Strip the following year after fighting between the two political rivals.

Jabr told Middle East Eye that Hamas's approval of repeated truce agreements with Israel was also seen by the Salafis as a renunciation of armed resistance.

Salafis have launched numerous missiles towards Israel in defiance of the truces, often embarrassing Hamas, which Israel holds responsible for all attacks launched from the Gaza Strip.

Nasser al-Suweir, an expert on Palestinian parties, told MEE: "The environment of the Gaza Strip - the suffering of poverty and unemployment, Hamas's sole governance, its favouritism towards its members, as well as its failure to bring about real reform - all constitute fertile ground very suitable for extremism and the recruitment of takfiris," a term used to refer to Muslims who accuse other Muslims of apostasy.

Suweir said Hamas was dealing with internal conflicts due to its militant origins and the requirements of governance.

While Suweir said older members of the group were angered at indirect coordination with Israel, much of the internal tensions remained unclear as he called Hamas a "closed movement".

Suweir said Hamas needed to change its approach to the mobilisation of its members, saying that discontent among members, who might then choose to join more marginal militant groups, constituted "a threat to Gaza and its surroundings".

The most violent confrontation between Hamas and the Salafis took place on 14 August 2009 at the Ibn Taymiyyah mosque in the southern Gaza town of Rafah.

Sheikh Abdul Latif Musa, leader of the Jund Ansar Allah Salafi group, declared an Islamic emirate in the Gaza Strip, in a move Hamas considered as defying its authority.

After the sheikh's supporters, including military commander Khaled Banat, barricaded themselves in the mosque, Hamas security forces shelled the building.

The incident resulted in the deaths of about 24 people and the wounding of around 130 others, as well as the arrests of hundreds of people.

Since then, the relationship between Hamas and militant Salafi groups has been marked by mutual distrust and dissonance.

The last suicide bombing in Gaza was in 2017, when a man blew himself up at a security barrier on the Palestinian-Egyptian border as he tried to enter Sinai, killing a Hamas guard. Yet Hamas was reportedly not the intended target for the bomber, who was bound for Egypt.

After each Salafi operation, Hamas has launched large-scale campaigns against them, one of which four years ago destroyed a small mosque called al-Muhtabeen, which served as the headquarters of a militant group in the central Gaza city of Deir al-Balah.

Hamas leader Younis al-Astal, a member of the Palestine Scholars Association, was one of the first sheikhs to have talked to militant Salafis in Gaza's prisons.

After several years trying to persuade them to adopt a moderate ideology and not resort to violence, Astal told MEE he had given up because of their lack of commitment after being released from prison.

According to Astal, whose last dialogue with Salafi members dates back to mid-2017, most of the Salafis interviewed were young men in their twenties who had had limited access to formal education but had gained a lot of their "religious and legalistic" viewpoints online.

Sources told MEE that one of the individuals involved in the suicide bombings was a man in his early twenties who had previously been a Hamas member before leaving the group.

The young man reportedly adopted takfiri ideology and had previously been detained by the Internal Security Agency in Gaza, only to be released earlier this year. 'About to erupt': What's behind the attacks across Gaza's frontier?
Read More »

Adnan Abu Amer, a professor at al-Umma University in Gaza specialising in the history of the Palestinian cause, said the fact that the bombing was carried out just two months after the man's release from prison raised questions about the existence of "sleeper cells" that may strike again.

Abu Amer, who has strong ties with Hamas, said that internally many members of the ruling movement supported a confrontation with hardline Salafi groups, but that often such Salafis belonged to respected and well-known families and clans with connections to Hamas.

Abu Amer told MEE that information available to the security services in Gaza indicated these groups did not necessarily constitute organisations per se, but rather separate armed groups comprising dozens of members and not exceeding a hundred members in total, linked organically with IS.

He added that many of these smaller hardline groups realised that direct confrontation with Hamas was not feasible given the latter's established rule and control in Gaza, and that Hamas had found it easy to penetrate the militant groups and employ them to carry out actions serving its own agenda.

'Armed confrontation would be disastrous'

Hamas's growing relationship with Egypt in the past two years has nonetheless stoked anger among Gaza's Salafis, as security agreements with Cairo led to Hamas's security forces tightening control of the border.

Over the years, an unspecified number of people have reportedly left Gaza to join Islamic State-affiliated groups in Iraq, Syria, Libya and Egypt's Sinai province.

In the Sinai, IS affiliates have regularly targeted the Egyptian army, but Hamas's tightened grip on the border has hindered their ability to smuggle fighters and military equipment into Egypt.

The recent suicide bombings have led some to fear that years of simmering tensions between Hamas and more hardline groups could break out into open conflict inside Gaza.

"I am not only in favour of [heightened] security treatment, but it is now a necessity," said Khaled Sadeq, an editor at al-Istiqlal newspaper affiliated to Hamas ally group Islamic Jihad. "It is required to go after this [takfiri] ideology and those who adopt it."

Sadeq stressed that "the Gaza Strip does not tolerate extremist ideology and military conflicts such as witnessed by Syria, Iraq, Yemen, Libya and Sinai".

"The scenario of armed confrontation would be disastrous for Gaza and its narrow space and high population density." 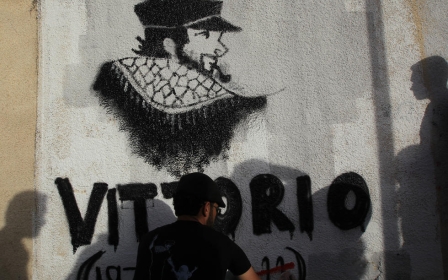