Gaza's health system could be overwhelmed by next week because of a surge in coronavirus cases, health advisers warned on Sunday.

The blockaded territory has almost run out of ventilators and could have no space in intensive-care units in 10 days' time, said Abdelraouf Elmanama, a microbiologist who is part of the enclave's pandemic task force.

"In 10 days the health system will become unable to absorb such a hike in cases and there might be cases that will not find a place at intensive-care units," he said, adding that the current 0.05 percent mortality rate among Covid-19 patients could rise. Overcrowding among Gaza's population of two million and the blockade imposed by Israel and Egypt have long caused concern about the virus's potential impact, but the territory had escaped a major outbreak until August.

That has changed since then, with almost 15,000 cases and 65 deaths recorded.

The World Health Organisation's local health lead, Abdelnaser Soboh, noted that a fifth of tests were coming back positive, with many from people aged over 60.

On 15 November authorities imposed a number of restrictions, including banning movement in the worst-hit areas, demanding shops close by 5pm and banning indoor visits of more than 15 people.

"This is a dangerous indicator since most [of those over 60] may need to be hospitalised," Soboh said.

"Within a week, we will become unable to care for critical cases."

Israeli Minister of Science and Technology Izhar Shay said on radio his government will facilitate humanitarian aid but will not ease the blockade on Gaza, which it claims restricts the access of weapons to the ruling Hamas organisation. 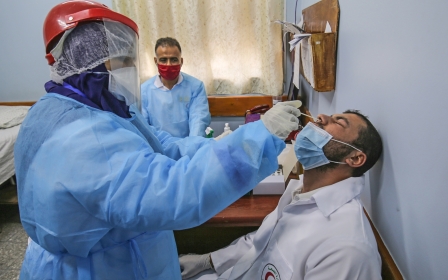