Job cuts, which follow US withdrawal of aid payments, will deprive many families in besieged enclave of their primary source of income 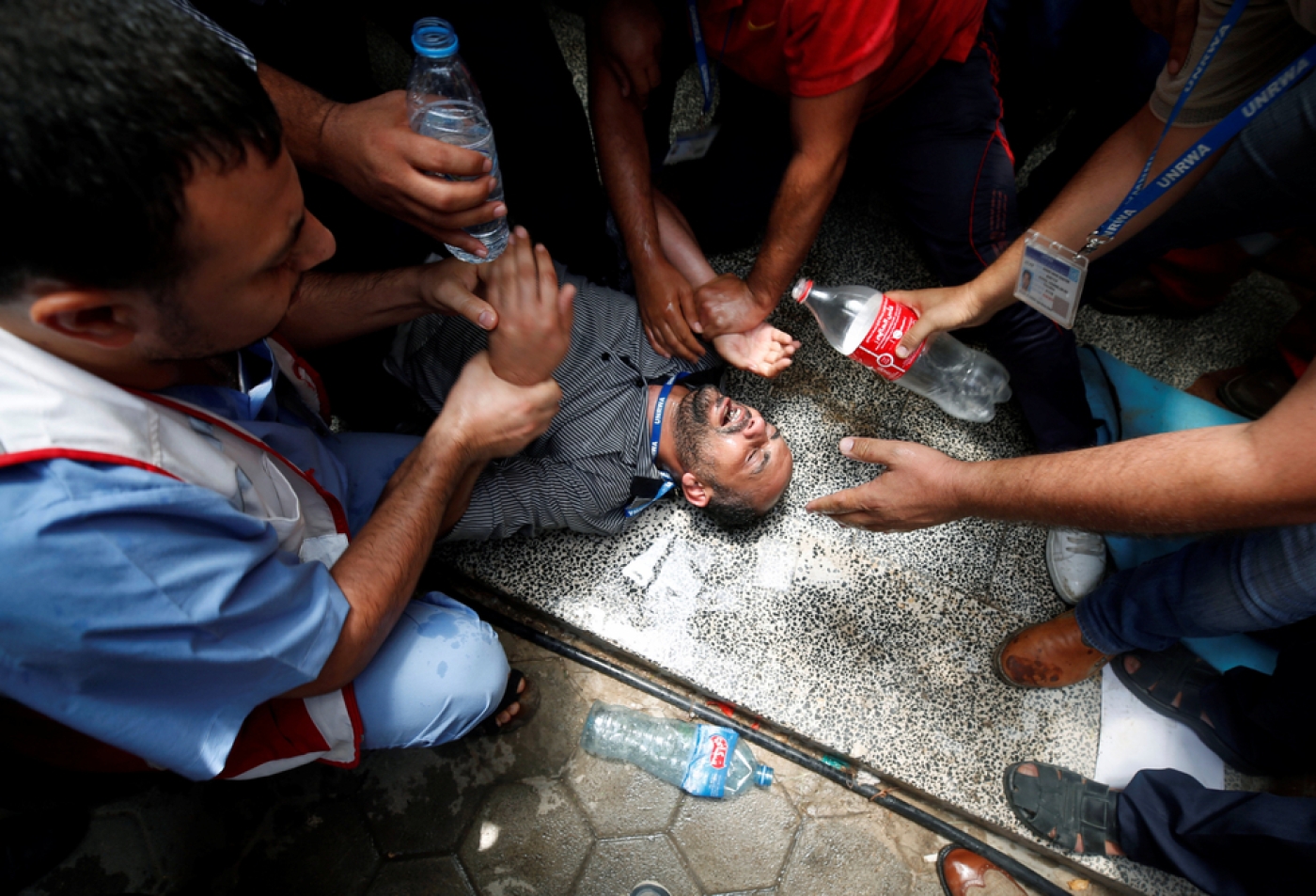 GAZA CITY, Gaza – A Palestinian UN aid worker attempted to set himself on fire after being dismissed by the UN Relief and Works Agency (UNRWA) on Wednesday, as hundreds protested job cuts.

Some employees whose contracts were terminated also fainted in front of the agency’s office while protesting their dismissal.

For many families in Gaza, these job cuts will mean loss of their primary source of income in the besieged Palestinian enclave.

While rumours about contract terminations had been circulating since early July, UNRWA only officially announced the cuts on Wednesday.

Meanwhile, three Palestinians were killed in an Israeli strike east of Gaza City on Wednesday, the health ministry said.

The Israeli army claimed it was carrying out strikes on Hamas targets in retaliation for shots fired at its forces along the Gaza Strip fence.

UNRWA has been facing an unprecedented financial crisis following the US State Department’s announcement in January that it would withhold $65m out of $125m in aid earmarked for UNRWA.

Faced with this significant slash in income, UNRWA announced its decision to reduce its budget by immediately terminating 125 employees in Gaza and downgrading the contracts of more than 800 more, Palestinian news agency Safa quoted the head of the agency's employees union as saying.

The Euro-Mediterranean Human Rights Monitor denounced the decision as "arbitrary and unacceptable", specifying that in addition to the 125 immediate terminations, 570 permanent employees were being downgraded to part-time contracts while another 270 employees were being transferred to other programmes.

Jamil Baalousha, 45, who has been working for UNRWA since 2001 as an engineer and later as a social worker, called on the UN agency to secure its refugee employees’ salaries regardless of the financial situation, as it is the only international body to  “bear witness [to] Palestinian refugees’ suffering over more than 70 years”.

The UN agency’s role is particularly crucial in Gaza, where 1.3 million of the blockaded enclave’s two million residents are refugees, and 80 percent of the population is dependent on aid to survive.

“UNRWA was the only hope left for Gaza families while all other governmental and non-governmental organisations operating in the strip are slashing employees’ salaries,” Baalousha told Middle East Eye.

“UNRWA employees do not only make a living for themselves; we are now shouldering the responsibility of supporting our brothers, sisters, and even cousins whose salaries were cut months ago. This is the straw that broke the camel's back!”

When UNWRA informed its workers of their decision to cut jobs, employees offered to help fill the deficit with proposals to help secure funding for next year's salaries, according to Baalousha.

However, Baalousha said that UNRWA's senior management “has ignored all of our appeals”.

Earlier this week, hundreds of UNRWA employees threatened with termination gathered outside the office of UNRWA Gaza director Matthias Schmale on Monday, only to be met with sound bombs fired by Schmale’s bodyguards attempting to disperse the crowd.

UNRWA had already notified some 97 engineers in January of its intention not to renew their contracts, changing them into “daily-labour” contracts. The engineers, who protested for 100 days and coordinated open hunger strike for several days, believe the agency will end their contracts by the end of this year.

Amir al-Mishal, the chairman of the UNRWA Employees Union in Gaza, said that the termination of 1,000 contracts would only amount to an estimated $4m in saving - barely making a dent in UNRWA’s $217m budget gap.

“How come an agency that was founded to support Palestinian refugees’ rights and provide assistance to them is now arbitrarily terminating their contracts and turning a blind eye to their suffering?” asked Mishal.

“There is no doubt that the US funding cut has disastrous consequences on all aspects of refugees’ lives, but we have suggested many ways to contain the crisis and avoid what happened today,” he added. “UNRWA is just not dealing with our demands.”

UNRWA was created in 1949 following displacement of more than 750,000 Palestinians from their towns and villages during the establishment of the state of Israel in what Palestinians call the Nakba, or “catastrophe”.

Today, more than five million Palestinian refugees depend on UNRWA in the occupied Palestinian territory and neighbouring countries.

Despite frequent tensions between refugees and UNRWA, Palestinian refugees nonetheless believe that the UN organisation’s registration of refugees from 1948 onwards plays a key role in maintaining the legitimacy of their claims to their right of return.

For Baalousha, the US decision to slash funding to UNRWA is a deliberate move by the administration of US President Donald Trump - a staunch Israel supporter - to undermine the Palestinian cause.

“This is not just related to a financial crisis; we know it has political dimensions and aims,” he said. “They are slowly dismantling UNRWA and burying the refugee question.”